Gone but Not Forgotten: Party Down

“Party Down” was a short lived half hour comedy from the Starz Network. It sprung from the mind of Rob Thomas (not Matchbox 20 Rob Thomas, “Veronica Mars” Rob Thomas). He created the show with Paul Rudd. It was about a party catering service mostly employed by Hollywood has-beens and hopefuls. It was a precursor to the cult NBC show “Community.” Both of them involved a decent sized group of social outcasts who find some common found. They are both even structured similarly, usually taking place in one location. The difference is Community has started venturing off campus, and Party Down took place at different locations, but only ever at functions.

Party Down was essentially the Island of Misfit Hollywood Losers.

Henry Pollard was played by Parks and Recreation’s Adam Scott. IN the first episode, it is Henry Pollard’s first gig as a member of Party Down. He is self-deprecating and unambitious after a really unsuccessful attempt at the acting business. He has an ignored but praise worthy role in an independent movie, but his role as an obnoxious party goer in a beer commercial killed his career. He couldn’t get out from under the catchphrase, “Are we having fun yet?”

Played by Lizzy Caplan. Casey is an aspiring comedian, but she is also a female. That doesn’t bode well as comedy is a boy’s club and difficult enough for a man to break in to the business. She sacrifices everything for her continuing career including divorcing her unsupportive husband. She is only biding her time as a member of the catering company until that break finally comes around. She spends a lot of time slacking off, dropping her name around the bigwigs at parties, and ducking out of work to make auditions.

The Up and Comer: Kyle Bradway

Played by Ryan Hanson. Kyle is an actor, model, and rock band front man. His actual level of skill is never really revealed, but studio heads and agents who meet him tend to like him. He still has some insecure high school alpha male problems where he keeps people down and builds himself up. He, occasionally, surprised with the amount of loyalty and kindness he shows to the rest of the party crew. His snarkiness can sometimes come off as ingenuine, and they tend not to take him up on some of his help. Needless to say, he seems more like the Channing Tatum/Paul Walker type. He has the ability to woo himself into the industry, but he doesn’t have enough skill or charm to have any staying power.

Played by Martin Starr. Martin Starr is in his wheelhouse as a guy too intelligent for his own good. He is a fan of hard science fiction, a form of sci-fi that focuses on scientific detail and/or scientific accuracy. He has the right amount of intelligence and talent to actually make it as a writer, but his overabundance of “integrity” gets the best of him. He is so dedicated to the hard in hard sci-fi that he forgets to include things like plot and three-dimensional characters. In this same way, he thinks everyone is out to get him because of this, and goes as far to think that he is much better than everyone else. 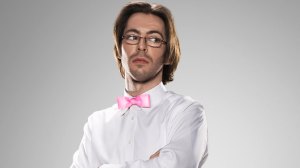 Played by Jane Lynch. Jane Lynch may have gotten everyone’s notice with Glee, but she definitely got Glee’s notice with Party Down. Jane Lynch was absolutely manic in her role as a Hollywood has been that never really was. She loves to take all her co-workers under her wing usually giving them misguided and straight up wrong advice. She also has an encyclopedia’s worth of stories involving a who’s who of Hollywood’s elite and strange sexual positions. Jane Lynch was only involved in the first season before she moved on to Glee since the show’s future was bleak from the beginning. 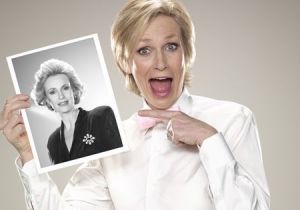 Played by Megan Mullaly. Lydia moved out to the coast so her 13 year old daughter, Escapade, could break into show business. She is all smiles usually dressed in something that was both characteristically fashionable and characteristically mom. She was upbeat and naïve buying into everything people were telling her when she wasn’t running out of breath talking about how great her daughter was despite Escapade never appreciating her mother’s hard work to give her the Hollywood opportunity.

Party Down is one in a long line of sitcoms with depressing premises that turns out to have a unique sense of humor and an ability to develop characters beyond a point that traditional sitcoms would even dare. Like Arrested Development before it and Community after it, the trend doesn’t seem to be slowing down despite general audiences and studios not doing them any favors. But that is why I write this blog, because the less appreciators there are, the more appreciation they tend to have.

2 thoughts on “Gone but Not Forgotten: Party Down”