A History of Mermaids on Film 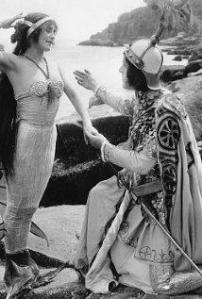 In this film Annette Kellerman plays Merrilla, Queen of the Sea, who discovers that if she saves four human lives she can have a mortal human body with an immortal soul. King Boreas, master of storms (Walter Law) captures her and locks her up to stop her from saving the lives of the sailors he tries to drown. Merilla is rescued by Prince Hero (Hugh Thompson) and they team up to defeat Boreas and rescue Hero’s betrothed, Princess Leandra (Mildred Keats). Annette Kellerman was a strong swimmer and actress who paved the way for all other women portrayed mermaids on film.

Trivia: In 1916, Kellerman became the first major actress to do a nude scene when she appeared fully nude in A Daughter of the Gods.

William Powell plays Mr. Peabody, who goes on vacation with his wife Polly (Irene Hervey) and happens upon a mermaid named Lenore (Ann Blyth). After bringing her home he predictably falls in love with the child-like mute and hides her in the bathtub, telling his wife she is a large fish. Chaos ensues when he is suspected not only of infidelity but of murder. Released the same year as Miranda and with a plot line sort of similar, Mr. Peabody and the Mermaid remains a charming mermaid tale.

Trivia: During the film Ann Blyth has no dialogue. She laughs, sings melodies, and cries but does not talk.

In this romantic comedy a man (Griffith Jones) on vacation finds a beautiful mermaid named Miranda who convinces him to take her back to London and disguise her as his invalid patient. As he and two other men fall in love with her, their women watch on suspiciously. Miranda is played by the charming Glynnis Johns who makes us believe that any fellow in her site could fall for her. The movie is entertaining all the way through, with the right amount of silliness and seriousness. It even has a sequel, Mad About Men (1954) in which Miranda once again causes shenanigans when she vacations on land.

Trivia: Glynnis Johns and co-star David Tomlinson would pair together as husband and wife in Mary Poppins.

Night Tide is a noir thriller about a young sailor (Dennis Hopper) who falls in love with a carnival worker with a mysterious past. The woman (Linda Lawson) plays a mermaid in the carnival and everyone around her begins to suspect she may actually be one when her beaus keep dying off. Night Tide is less about mermaids and more about the power of gossip and a good mystery but it still keeps a sea theme throughout its entirety. A clever twist ending makes Night Tide more of an adult film than the rest on this list, and despite its low quality on DVD, it is definitely worth a watch.

Trivia: Dennis Hopper’s sailor suit was slightly darkened so it would read as white on film. During production, Hopper was spotted by military police who threatened to arrest him for wearing a dirty uniform.

Mermaids of Tiburon is the story of two men, Dr. Samuel Jamison (George Rowe) and Ernst Steinhauer (John Mylong) who search for rare jewels on the island of Tiburon. During their adventures they are aided by beautiful mermaids who are guarding the treasure from those who would steal it, especially gangster Milo (Timothy Carey). Today the movie is mostly known for its scandalous half-naked women but it remains a beautiful underwater adventure.

In the romantic comedy Splash, Allen (Tom Hanks) is rescued from drowning by the beautiful naked woman Madison (Daryl Hannah). She and Allen begin dating but after a string of odd behavior, he soon discovers that when her legs get wet, they turn into a fin and that she is, in fact, a mermaid. With hysterical performances by Eugene Levy as the scientist determined to catch a mermaid and John Candy as Allen’s mischievous brother, Splash is an exciting, adventure-filled romantic comedy that remains a much-loved movie to this day. Most people don’t know this, but there is even a sequel to Splash called Splash, Too, about the couple returning to the city.

This Disney animated classic is a PG version of the classic Hans Christian Anderson story about a young mermaid named Ariel (voiced by Jodi Benson) who falls in love with a prince and trades her voice to live on land with him. Filled with epic battles, memorable songs and colorful animation, The Little Mermaid brings to life this magic tale. Disney rewrote the story to have a happily-ever-after and it has remained one of most loved movies of all time for both adults and children.

Trivia: Ariel was quite deliberately made a redhead in order to distinguish her from Daryl Hannah’s character in Splash. 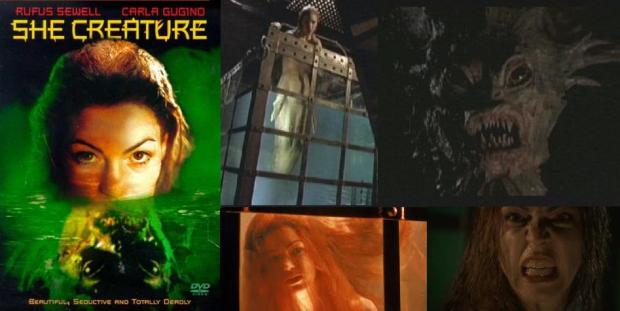 She Creature is a horror movie based on 1961’s Night Tide. It took the noir thriller and turned it into a creature feature about two carnival workers (Carla Gugino and Rufus Sewell) who find a real mermaid (Rya Kihlstedt) to use in their show. During their ocean journey they learn just how dangerous this creature can be when she turns into something a lot more hideous and intimidating. Oh, and she can also read minds. While not as good a film as the original, She Creature is a fun monster movie nonetheless.

Trivia: Rya Kihlstedt spent three hours in make-up a day so she could portray the mermaid.

Aquamarine is about two young teenagers (Emma Roberts and Joanna ‘JoJo’ Levesque) who find a mermaid in their swimming pool. Aqua (Sara Paxton) has left the sea to find true love and prove it exists so that her father does not marry her off to a merman against her will. The three plot to set her up with hunky lifeguard Raymond while dealing with mean girls and the threat of one of them moving halfway across the world. Aquamarine is a sweet movie that is entertaining both for children and adults and weaves life lessons into a fun storyline about a mermaid.

Trivia: Jessica Simpson was originally offered the role of Aquamarine, but was forced to turn it down due to scheduling conflicts.

Fish Tales is the story of an awkward professor (Billy Zane) who spends the summer in Greece with his daughter (Amber Savva) trying desperately to finish his work before he loses his job. While there, they meet a mermaid-goddess (Kelly Brook) who at first wants nothing to do with him, but after a love spell is said aloud, things go awry. Although an original story, this “comedy” is badly acted and poorly written, although viewers take solace in getting to see Kelly Brook dressed as a mermaid.

Trivia: The mermaid tail that Kelly Brook and her stunt double, Hannah Stacey, wore for the film were specially molded to fit each of them and took three and a half months to build.

Pirates of the Caribbean: On Stranger Tides (2011)

In the fourth Pirates of the Caribbean, the characters’ journey includes finding a mermaid and capturing her tears. In the movie mermaids are portrayed as beautiful creatures that turn deadly when they lure sailors to their death (like the sirens of Greek mythology). Astrid Bergès-Frisbey plays the unfortunate Syrena who gets captured by Jack Sparrow and his party. Other mermaids in the movie are portrayed by model Gemma Ward, Jorgelina Guadalupe Airaldi, Brea Berrett, Toni Busker, Sanya Hughes, Daphne Joy and Antoinette Kalaj. While mermaids are not the central plot of this movie, their scenes are the best part of it and their portrayal as beautiful yet deadly is worth remembering.

Trivia: Jerry Bruckheimer gave a strict casting instruction to casting directors that actresses auditioning for the mermaid roles must have natural breasts.

Empires of the Deep (Coming Soon)

Empires of the Deep is a US-Chinese co-production starring Olga Kurylenko and Shi Yanfei that is a love story between a young man and a beautiful mermaid.

*All trivia is from IMDB.com

11 thoughts on “A History of Mermaids on Film”