It seems like so long ago, but there was a time that many feared for the future of Doctor Who as David Tennant was leaving the TARDIS controls behind, and an unknown young actor would be taking the Sonic Screwdriver like the passing of a baton. Fortunately the young actor who became the next Doctor was Matt Smith, an actor who silenced critics and proved himself to be a perfect match for the part.  Over the four years which followed, fans watched as Smith’s Eleventh Doctor;  restarted the universe, uncovered the mystery of River Song, and proved that bow ties are cool. But now Silence is falling for this amazing incarnation of the Doctor, but before it’s over it is time to look back at the twenty best moments Matt Smith has brought us on the show.

20. “I wear a fez now. Fez’s are cool” (The Big Bang): In his very first episode this Doctor proclaimed that bow ties were cool, but as he scurried around a museum trying to solve the mysteries of the Pandorica, he gained a new fashion accessory as he nonchalantly placed a fez on his head and continued on. It was not until River Song confronted him about it that the Doctor informed us all that “fez’s are cool” as well.

19. Putting Hitler in the cupboard (Let’s Kill Hitler): When the Ponds’ rowdy friend “Mel” gets ahold of the TARDIS, the Doctor and his friends find themselves face to face with the most evil man in modern history, Adolf Hitler. After giving the dictator the warning that “the British are coming”, he instructs Rory to do the only sensible thing and place the madman in the cupboard for the remainder of the episode.

18. Spitfires in space (Victory of the Daleks): Naturally during his tenure as the Doctor, Smith would find himself confronting the Daleks. In a spaceship orbiting the planet, the Doctor needs help to save the planet, and luckily he gets aid in the form of propeller powered Spitfires flying into space to battle it out with a flying saucer. This imagery alone had the ADD-ridden child in everyone pumping their fists with glee at the sight of the anachronistic vehicles battling it out.

17. Killed at Lake Silencio (The Impossible Astronaut): Fans were told by Moffat ahead of this season premiere that a major character would die. But the sight of the Doctor being gunned down by a mysterious figure in an astronaut suit caught people completely by surprise. As the Ponds and River Song can only watch in horror as the man they hold in such esteem is dead, they along with the audience are left to wonder what happens next.

16. Daleks in disquise (Asylum of the Daleks): The Doctor’s arch enemies have become pop culture icons, recognized the world over. This has caused them to lose  much of the aura of terror and fear they once held. Steven Moffat fixed this problem with the opening of Season 7 by adding a new weapon to the Daleks’ arsenal, as the Doctor meets with a woman on the remains of Skaro, he discovers that his old enemies now have the ability to disguise themselves as humans. Now, much like the shark in Jaws, these alien threats could be hiding anywhere.

15. Christmas with a shark (A Christmas Carol): In his first Christmas outing, Matt Smith gave fans a Doctor Who-take on Charles Dickens’ classic tale of ghosts reforming a greedy old man. The Time Lord must save the soul of Kazran Sardick (played by the legendary Michael Gambon) by giving him one final Christmas to spend with the love of his life. In a tear jerking climax Sardick and his love cause a beautiful snowfall and take off into the night on a shark drawn carriage. 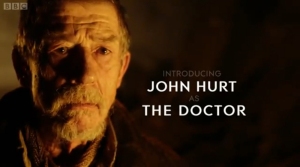 13. Crisis of conscience (Day of the Doctor): At the climax of the fiftieth anniversary special of Doctor Who, the Doctor finds himself once again in a dark moment in his life as he has to make the choice to destroy his own people or allow the Time War to continue. Only this time he was his impossible girl, Clara Oswald by his side, to remind him of who he is and why he must find another way. This leads to the Eleventh Doctor making the fateful decision to not only change the course of history, but to unite all the other incarnations of the Doctor from across time and space to aid him in a plan that is crazy enough to work.

12. Bursting through the painting (Day of the Doctor): If action movies have taught me anything is that explosions and slow motion makes everything cooler. In this special this idea is proven once again, as Matt Smith along with David Tennant and John Hurt venture through the mayhem filled last day of the Time War and through a piece of artwork into the Tower of London, trashing a Dalek in dramatic fashion along the way. Clara’s quip about apologizing for the theatrics was just icing on the cake for this moment.

11.  The TARDIS saying “hello”(The Doctor’s Wife):  Legendary fantasy writer, Neil Gaiman fulfilled the wish of fans everywhere by penning his own Doctor Who episode. In the emotional love story, The Doctor’s Wife, we see the kind of relationship the Doctor and his time machine have. In a tearful moment at the end the TARDIS finally says to the her thief the word she has been trying to come up with, “hello”. If you call yourself a Whovian and didn’t shed a tear at this scene, then you may want to reconsider your fandom of the show.

10. Breaking into the White House (The Impossible Astronaut): On a secret mission, the Doctor and his companions must break into the most secure place in the world, the White House. In true Who fashion  he simply does this by quietly walking right into the Oval Office and taking notes until he is inevitably taken down by security, relying on his compatriots; the Legs, the Nose, and Miss Robinson to come to his rescue.

9.  Locked in the dungeon (Day of the Doctor): Many of us find ourselves in dark moments of self reflection when we are alone. In this scene the Doctor finds himself and two of his previous incarnations locked in the Tower of London, confronting the dark past he has been trying to forget. In a powerful scene, the three Doctors discuss the number of children lost on Gallifrey and how he copes with what he did. Luckily before this dramatic moment treads into the territory of being too dark, Clara “helps” discover a way to escape the dungeon.

8. Stormageddon (Closing Time): In his Eleventh form, the Doctor makes an unlikely friend, in the hapless Craig. When he pops by to see Craig for what he thinks is a final time he discovers his buddy now has a baby. But the infant does not care for the name given to him by Craig and reveals to the Doctor that he prefers the title, Stormageddon Lord of All Darkness. Not stopping there, Stormy would rather call everyone  else “peasants”, rather than learning their names.

7. The Silence and the moon landing (Day of the Moon): When Matt Smith’s Doctor finally confronts his arch enemies, the Silence he must come up with a way to defeat the race that has been secretly controlling humanity for centuries. In a moment of brilliance he tricks the Silence into issuing the orders for their own death during one of the most seen moments in human history.

6. A good man goes to war (A Good Man Goes to War): One thing that Doctor Who villains have yet to figure out is that if they do not wish to be utterly and completely defeated and destroyed at the hands of the Doctor they should not mess with his companions. This is the lesson learned by the Headless Monks and Madam Kovarian as they kidnap Amy Pond and her child. Uniting many of those who owe him, the Doctor assembles an army unlike any seen before, in order to accomplish a brilliant plot of defeating his enemies and rescuing his companion without a drop of blood being spilled. But of course this victory will not last long, but for a brief shining moment we see the extent of the Doctor’s wrath. 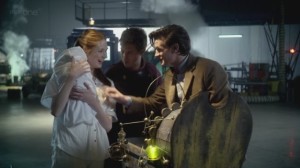 5. Losing the Ponds (The Angels Take Manhattan): Ever since he crashed his TARDIS into the shed in a little girl’s backyard, the Eleventh Doctor had been accompanied by Amy Pond and her husband Rory. But all good things must come to an end as the trio discover that the Weeping Angels have developed a sinister plot in Depression era New York. In true Moffat fashion, we viewers reach a moment where they believe all is well before the horrible rug is pulled out from under them, as Amy, the Doctor’s best friend makes the decision to be with her husband and leave the Doctor.

4. Song of hope on Akhaten (Rings of Akhaten): On his first trip with Clara the Doctor takes her to Akhaten, where the life forms are in the middle of a prestigious religious ceremony to sing their stories to the tyrannical god at the center of their system. Taking it upon himself to stop the powerful creature when it threatens the life of a small child, he feeds his vast experiences and memories to the monster while the people in the system unite in a song to help the Doctor. One of the most powerful moments of the series to date.

3. Van Gogh and the museum (Vincent and the Doctor): Penned by the great screenwriter, Richard Curtis, the Doctor and Amy find themselves helping Vincent Van Gogh, battle a creature which serves as a clear metaphor for the artist’s struggle with depression. Once the day is saved, the Doctor takes his new friend on a trip he will never forget to the prestigious Musee` d`Orsay. There among the finest artwork in the world the tortured artist learns of the impact he leaves on the world and how beloved he will become despite not being recognized for his talent in his own time.

2. Stonehenge speech (The Pandorica Opens): To say this is one of the most memorable moments in Doctor Who history is an understatement. After this episode aired the speech delivered by Smith to a host of enemies at Stonehenge caught fire with fans as they posted videos of their children reenacting the scene, and at one convention I attended they requested that former Doctor Sylvester McCoy read it and put his own spin on it.

1. Confronting the Atraxi (The Eleventh Hour): In his first episode Matt Smith had a great many things to do. Make a new companion, fix his damaged TARDIS, and find Prisoner Zero, all under the timetable set by the Atraxi. Once he saves the day, Matt Smith establishes the kind of Doctor he will be in one scene as he calls down the Atraxi to give them a simple message. He calmly dresses himself as he instructs the extraterrestrial menaces on what they should research about earth, all leading up to the beautiful moment when he challenges them to find out what happened to the others who threatened the planet. As they discover what kind of Time Lord they are dealing with he stands before them clad in his now iconic tweed and bow tie to greet them with a “Hello, I’m the Doctor.Basically…run.”