It’s hard to picture a list of the best cinematic thriller/mysteries of all time without including Seven.  Yet if not for the resilience of director David Fincher, the film might not have happened at all.  While Seven was critically and commercially successful, Fincher’s debut feature film, Alien 3 was not.  To this day, Fincher disavows himself from the film.  His disputes with the producers over the script and budget are well documented.  Fincher even told The Guardian once, “No one hated it more than me, to this day, no one hates it more than me.”

While I 100% disagree with Fincher on his assessment of Alien 3 (I personally love the film) his contentious relationship with the studio made him retreat back into video music directing.  In fact some accounts claim he almost quit Hollywood (or at least feature films) altogether.  He’s famously quoted as saying “I thought I’d rather die of colon cancer than do another movie.”  Thank God for cinemafiles he didn’t.

All great films start with one solid foundation:  a great script.  Andrew Kevin Walker’s screenplay is damn near flawless.  He based the screenplay off of his time in New York City, which he hated.  Walker did admit however that if he hadn’t lived in NYC he probably wouldn’t have written Seven.

Seven definitely possesses a New York City feel to it but the film never comes out and SAYS it’s in NYC.  There’s a dreariness and oppressiveness to the film even in the way it’s shot.  Rain and darkness pervade the movie and most scenes take place in poorly lit rooms.  In fact the gloom is so prevalent that when scenes in the sun actually happen, it feels discordant.  It’s not a coincidence that the final scene occurs in broad daylight. The way that Fincher and cinematographer Darius Khondji capture these elements is nothing short of masterful.  Production designer Arthur Max added to Seven‘s tone by creating a dismal world that reflected moral decay.  From a physical standpoint, the dark images were accomplished through a trick called “bleach bypass” wherein the silver in the film stock wasn’t removed.   The shadowy tone implies that the events and actions of both John Doe and the people of the city, could be in any major metropolitan area. Isn’t it terrifying to think there are John Does everywhere?

Fincher himself hadn’t read a screenplay for a year and a half after his experiences on Alien 3.  Yet Walker’s script intrigued him enough to draw him in.  It was a master treatise on inhumanity.  The inhumanity in the serial killer John Doe but also the inhumanity of everyday people.  David Fincher likened it to a “meditation on evil.”

“A meditation on evil” is a perfect description of how I feel about Seven.  While yes John Doe (Kevin Spacey) is a deranged and misguided individual, the script and the character forces you to question whether or not he’s truly insane.  Moreover, it posits that labeling serial killers crazy is inherently dangerous.  At one point Doe, says to Detective David Mills (Brad Pitt) that it’s easy to label him as crazy.  This reflects Detective Lieutenant William Somerset’s (Morgan Freeman’s) admonition to Mills, “You can’t afford to be this naive!”  I think both characters are trying to say that if you dismiss these individuals as insane, you’re deliberately ignoring the circumstances of what drove these killers to perform their heinous acts.  Perhaps it is the circumstances themselves that need fixing. Failure to do so just creates more John Does.  As Spacey says in the film, “Only in a world this shitty could you call any of these people innocent.”  He really and truly believes that.    In fact I might offer that the common sins he sees everyday are comparable to his own acts of violence.  John Doe doesn’t see gradations of evil.  In his mind all sins are equal.  That we allow them to continue makes us all complicit.

Too often in serial killer films the violent act tends to overwhelm the entire movie, ala Friday the 13th.  What’s ingenious about Seven is how NONE of the actual murders for the seven deadly sins occur onscreen, except the last one.  Think about it.  Somerset and Mills discover all the victims after the fact.  Rather than spend the time showing John Doe’s actions, he as a character remains, appropriately, in the shadows until the third act.  We see his psyche revealed gradually through others’ examination of his crimes or in the countless notebooks he writes. 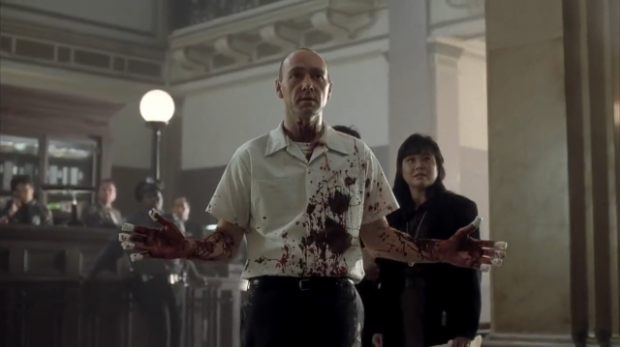 To expand on the absence of onscreen deaths, there’s a direct corollary to something I think Fincher deliberately intended.  Sometimes horrifying images are worse if they only reside in our imaginations.  Take for example the lust victim where John Doe forces an unwilling man to wear an S & M device on his genitals and then proceed to rape and kill a prostitute.  They never showed it but I can remember imagining what must have happened in my mind’s eye and being chilled to the bone.

That’s not to say of course that there weren’t a few gruesome moments. The scene where the SWAT team discovers the sloth victim who suddenly jerks up on the bed alive?  It gave  me nightmares and still haunts me.

You really can’t ask for better casting than Seven.  Pitt was perfect for the role of the eager but somewhat naive Mills.  This film along with his Academy Award nominated performance in 12 Monkeys  that same year, really catapulted him into the Hollywood limelight.  Morgan Freeman’s Somerset counterbalances Mills.  Older, experienced, but jaded, Somerset sees Mills as how he used to be, before time and relentless city crime made him disillusioned.  Al Pacino, Denzel Washington, and surprisingly Sylvester Stallone turned down the role the Somerset.  (No offense to Sly but thank God he did).  In retrospect I’m glad they all passed because I can’t see anyone else playing Somerset.

The supporting cast is just as stellar with the exceptional R. Lee Ermey giving one of  his best performances as the police captain.  Gwyneth Paltrow shines as Mills’ lonely wife.  That scene in the restaurant where she talks to Somerset about her pregnancy is as intriguing as any other part in the  movie.  Heck even Richard Roundtree, mothereffin’ Shaft, showed up as a District Attorney.

Of course the real gem of the supporting cast is Kevin Spacey as John Doe.  Ironically just like Pitt, his turn in Seven and 1995’s The Usual Suspects pushed him to the Hollywood A-List.  Spacey’s Doe flipped the preconceived notions of what constitutes a serial killer on its head.  He’s not a suave intellectual like Hannibal Lecter or certifiable like John Wayne Gacy.  Spacey’s Doe comes off logical and detached, almost serene.  The only time he really expresses any emotion is when Mills calls Doe’s victims innocent.  Even his final words to Mills are measured and reasonable, as if he’s reciting directions to Costco rather than telling him how he raped and murdered Mills’ Tracey.

Which leads us into the “WHAT’S IN THE BOX???!!!” scene.  Has there ever been a more compelling, terrifying, and shocking scene in the history of cinema?  Possibly.  But it’s at least in the top ten.  Yet the history behind the scene is equally fascinating because it almost didn’t make it on film.  New Line actually sent Fincher the wrong draft of Seven.  The draft they meant to send was actually a later draft that didn’t have the head in the box scene in it.  There was a huge amount of pressure to eliminate the scene due to its severity and gruesomeness.  However, Fincher and Pitt fought hard to keep the scene in, Pitt going so far as threatening to quit if the scene was not included.  In fact Mills shooting John Doe was supposed to be the final shot of the movie.  Both the production company and Fincher reached a compromise where the head in the box scene remained but the scene where Somerset quotes Ernest Hemingway was tacked on.  Ostensibly this part was done to soften the blow of the previous scene.   Considering the head in the box scene is one of the best in movie history, it’s incomprehensible to think it was almost left on the chopping room floor.

The genius of the scene itself were the reactions of all three characters.  Somerset upon seeing Tracy’s head in the package, jerks away and begins to stutter.  From a detective who’s seen it all and grown accustomed to the dark tendencies of the human race, this possesses a ton of impact.  Up until now Somerset has been unflappable.  This truly unnerves him and concurrently the audience.  John Doe meanwhile continues as his normal cool self.  He reveals to Mills how he raped and murdered Tracy in an almost laconic manner, as if the act itself was perfectly natural.  John Doe believes the act to be a logical progression of the murders that have come before, and that his death at the hand of Mills is the only natural conclusion.  Over the years Brad Pitt has certainly had his share of hits and misses, much like any actor.  However, if you ever doubt his acting ability, I challenge you to re-watch this scene.  The look of pure anguish on his face at the realization that Doe has killed his wife is palpable.  You can almost feel his guts churning when he yells “Oh God!”  And his expression when Doe says that Tracy was pregnant?  Never have I felt such sympathy for a character.

Mills killing Doe always left me with mixed emotions.  On the one hand, I’m thrilled that Doe finally gets his after all the murders he’s performed.  However, conversely Mills’ act seals the fact that Doe won, just as Somerset said it would.  Moreover, I believe Doe WANTED to die.  He accomplished his mission and he didn’t want to live in such a sinful world. The ending leaves one questioning the nature of evil, and more importantly the gradations of evil in society.  Is the world “worth fighting for” as Ernest Hemingway said?  Somerset seems to think so, despite the evil already present in the world.   I tend to agree.

Twenty years later Seven remains a compelling and compulsively watchable film.  It’s a film that challenges you and makes you question the nature of evil and perhaps the lies we tell ourselves to avoid and ignore evil.  It’s also impeccably directed, marvelously shot, superbly acted, and flawlessly written.  And furthermore it’s just damn entertaining.

← Casting Call: A Shazam For The Rock’s Black Adam
Timey Wimey Talk: ‘Doctor Who’ Series 9 Episode 4: ‘Before The Flood’ →