Does Rob Liefeld Deserve to Be Hated On?

If there’s one thing the internet loves, it’s a hate fueled bandwagon. Most of us have been guilty of it at least once and I’m no exception. Although I had been reading comics for a long time, and had a handful of favourite artists such as Jim Lee and Nicola Scott, I didn’t dwell too much on the styles of individuals. Regardless, when the ’40 Worst Rob Liefeld Drawings’ took off in popularity I laughed it up, shared it and added my voice to the crowd. It’s almost human nature, which isn’t a particularly nice thought.

Over the past year I’ve been working my way through the complete run of the X-Men comics, starting with Stan Lee and Jack Kirby’s debut issue. I’ve also picked up the spin-off series, including ‘New Mutants’. I’ve recently gotten far enough through the run that I’ve entered the Liefeld break-out era. I want to look at these issues with fresh eyes and ask the question: is this bandwagon hate or is there a real problem with his work? Here’s a few things that stood out.

There are those who defend Liefeld’s crazy bodily proportions, claiming that he’s simply adding an exaggerated physique to the characters to emphasise their strength and power. Jim Lee does a similar thing. But with Liefeld things get out of hand. Character’s bodies get so distorted and sexualised that it becomes impossible to tell the adult characters from the young teens.

Over on the right we have Tabitha ‘Boom Boom’ Smith, who is supposed to be a teenager, looking like a sexualised woman in her mid 20s. I did read a few issues of ‘X-Force’ during the 90s, all drawn by Liefeld, and I honestly didn’t know that the characters were supposed to be teenagers. This is a real problem for the book, as it’s unique selling point is that they’re a teen group. Also I’m not sure what’s going on with her thighs.

This was in stark contrast with the previous ‘New Mutants’ artist Bruce Blevins. During this run the characters looked like they were in their early teenage years. 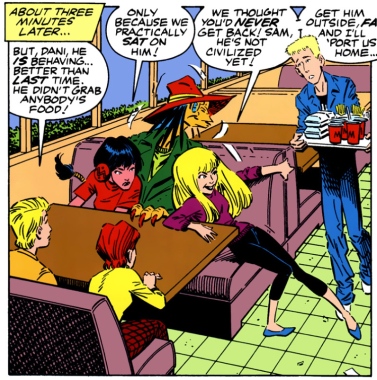 They have figures, clothing and postures that suggest they are roughly 13-16 years old. This is much more appropriate because that’s the age the characters are. Sexism is an accusation often leveled at the comic industry, and with the depiction of 15 year Boom Boom above this is not surprising. What is the narrative reason for this outfit? None. She puts in on and everyone gawks at her. That’s it.

It gets really freaky when Liefeld draws babies, because they come out looking like middle aged adults shrunk in size: 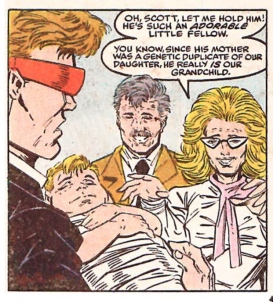 What the heck are they? For reference, these kids are supposed to about six months old. This is what a six month old looks like… 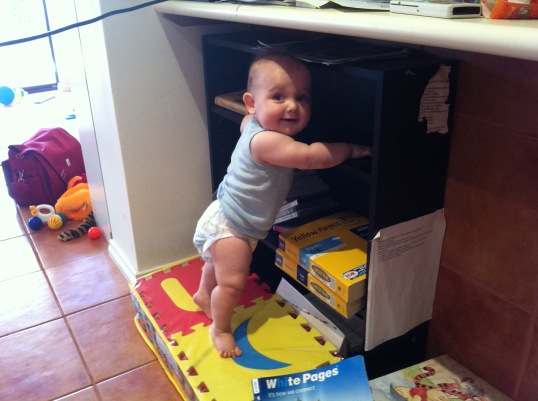 You will notice that my six month old son lack the hard lines of a world weary traveller and full head of 80s styled rocker hair.

Going back to Blevin, he also features his characters partaking in typical teenage activities and, often, sitting and laying around the room when going about their day.

Why does Blevin’s teenagers look younger than Liefeld’s infants?

I don’t know if this is a due to laziness, limited skill or lack of creativity but Liefeld usually puts all the characters standing awkwardly around the room, leading to the next problem I noticed…

Everyone Stands in the Same Pose

Every character has their own personality and one way this can be communicated is through their body language. The two images from Blevin’s above says a lot about Cannonball, Magik and Mirage. When Liefeld puts the team of diverse characters in a group, they do this:

Apart from repositioning their arms Boom Boom, Skids (left) and Rictor (middle back) are standing the exact same way. Why do that? It’s boring. Then we have Rusty (middle) pulling the pose as Sunspot  (middle and right) while wearing very uncomfortable looking pants.

This weird mirror game the characters are playing goes further. It’s not just for dramatic poses on rocks, it’s also for fight’n!

When a gargoyle drops off a courthouse roof Rusty and Skids quickly adopt the exact same legs apart, arms out posture. Stand up and try replicate that pose. Does this feel like a natural thing to do? Two people jumping into this posture is barmy.

Something that really emphasises the similarities is that regardless of age all the characters are roughly the same height and build. During the early issues of X-Factor Artie and Leech were recruited and each had a very distinct look. One had large, blank eyes and the other normal eyes, one had tufts of hair, the other bald with an engorged head, one was noticeably taller and slimmer…

…or you can draw them as essentially the same person with different coloured skin. Can you copy and paste when using a pen? Aside from the colours almost all their distinctive features are gone. And as I type this I notice that Cyclops is carefully balancing on his toes in the second panel because that knee is nowhere near the ground. Cyclops’s secondary mutation is yoga.

Not only does distinct figures give the characters a sense of identity and communicates their personality, but can be used to show their relationship like in the example below.

So long as he spends plenty of time of the facial expressions this shouldn’t be a problem. If we can tell what a character is thinking or reacting to through the artwork then we can ignore the weird poses.

Unless they are all thinking “I’m having a stroke”.

The Backgrounds are Ignored

I have to assume that this point comes out of laziness on behalf of the artist. Something weird happens to the backgrounds whenever Liefeld is on the scene. Either they turn into an odd mish mash of lines and cross hatching…

Did everyone suddenly age rapidly?

This is supposed to be an action sequence, for chrissakes. This is the time you can get away with putting nothing but lines in the background to give the action a sense of speed and direction. Instead we’re left confused by which direction the characters are moving in.

I can’t tell if that is an upward or a downward strike, or which arm is moving. That’s one of Liefeld’s more famous creations, Cable. He was a strange addition to the ‘New Mutants’. Let’s talk about what his arrival did…

When Cable turned up he was the the first of many identical characters Liefeld ‘created’. And Liefeld freak’n LOVED Cable, and he wanted us to love him to. He gets dropped into the story without context and immediately spends three issues single handedly kicking the ass of Freedom Force and the Mutant Liberation Front. The former are a long running group of foes for the X-Men, and whenever they met they would usually fight to a stand still. Yes, a government backed team of mutant villains who could fight the X-Men down to the bone, and this totally unfamiliar character can mop the floor with them.

The response of Freedom Force? Talk about how awesome Cable is. 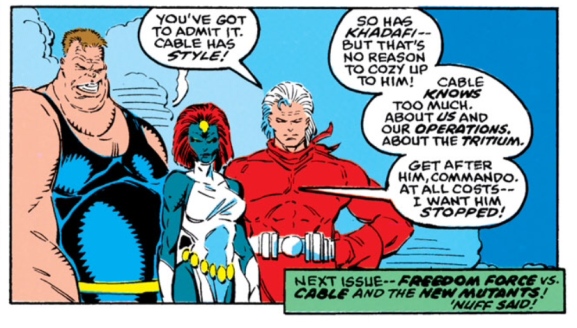 It goes further. For two issues a running plot has New Mutant Wolfsbane being summoned home by her adopted mother Moira. The concern Moira has is Wolfsbane going on dangerous missions, and she will immediately fly from Scotland to New York and physically fight the New Mutants to get her daughter out of the situation. But then Cable swans in and declares that he is taking these children – who he has never met – on what he describes as a suicide mission. Shit…Moira is not going to put up with that!

“As long as you’re involved, Cable…” she says. We know nothing about this guy yet his presence makes it OK to send a 13 year old on a combat mission.

This is not how you make the reader like a character. You develop their personality, show what they do and have them overcome conflict. You don’t drop them into an ongoing story and have everyone talk about how awesome he is. That’s what the less talented fan fiction writers do when they write themselves into their favourite TV show.

Not That He Cares About Continuity

It feels like a different book after Cable turns up. There are more guns and swords and general Mary Sueing. It feels like a lot of the previous continuity is being ignored. Much like Cable teleporting back and forth to the fence he jumped over on this page.

He climbs the fence, he runs away, then he’s right back in front of it! What a super power!

Ok, I think I’m about done. After trying to take a fresh look at Liefeld’s work…it’s not very good. I’ve tried to avoid the nitpicking done by other articles but there’s plenty of big issues at work here. There are some good examples of comic art here but they’re so buried in frustrating problems they bring the quality of the book down. But we haven’t yet talked about my favourite problem with Rob Liefeld’s work.

Everyone Pretends to Be An Airplane When They Run 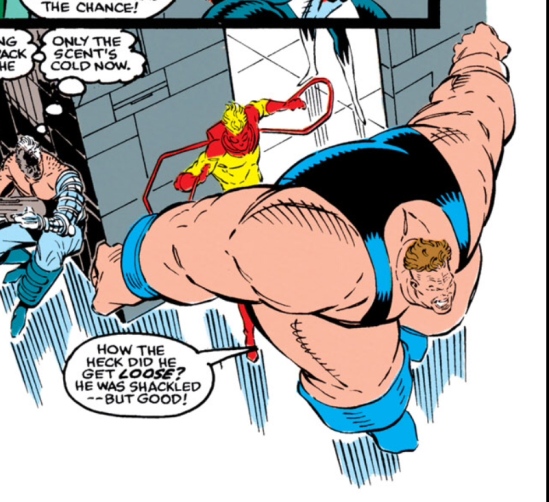 13 thoughts on “Does Rob Liefeld Deserve to Be Hated On?”