Plot: Drug baron Poppy Adams has a monopoly on illicit trade and launches a devastating attack on the Kingsman before putting her world changing scheme into action. The surviving Kingsman members – Galahad and Merlin – make contact with their American counterparts to bring down Poppy.

Review: It’s hard not to be excited about this film. It’s been one of our most anticipated flicks for 2017, mostly because the first one was such a cracker. It riffed on the classic spy films without being a parody, it was fun, quirky and exciting and was so fast paced and stuffed with great scenes that warranted multiple viewings. With all that behind it there’s high expectations on this star-packed sequel.

We begin with Eggsy (Egerton), now fully fledged agent Galahad and still dating Princess Tilde (Hanna Alström), being attacked by former rival Charlie (Holcroft) who sports a cyborg arm. It’s revealed that Charlie is working for Poppy Adams (Moore), a psychopath obsessed with 50s nostalgia who controls the world drug trade. She obliterates the Kingsman organisation, forcing Galahad and Merlin (Strong) to seek out the American Statesman agency where they meet their counterparts Tequila, Jack Daniels, Champagne and Ginger Ale (Tatum, Pascal, Bridges and Berry respectively) and launch a counter-offensive.

Oh, and Harry (Firth) is still alive in spite of taking a bullet to the head. This gets explained with some standard comic book soft science and Harry returns with amnesia and an obsession with butterflies. It’s hard to imagine returning to this franchise without Firth, and the explanation is  in line with the rest of the oddness in Kingsman, so it holds up as well as anything. With Merlin occupying the father role for the first half of the film and a whack of new characters to learn about they certainly didn’t need him though.

Speaking of oddness, the original film had a certain quirkiness that set it apart from the rest of the market. The Golden Circle, on the other hand, has swapped out quirkiness with silliness and it’s not the right direction, especially as we’ve lost the initial grounding of Eggsy’s previous life. Poppy has a volcano liar made to look like 1950s Americana, but she also has this sideline in robotics. This aspect is where the silliness really stands out. Fully functional cyborgs, robots and guard dogs stretches the suspension of disbelief almost to breaking point. Amid everything else these CGI creations don’t add enough to the experience to make them worth it.

The biggest selling point comes in the form of The Statesman group, and they’re plenty of fun. Rather than the umbrellas, briefcases and suits they’re got a Southern drawl, cowboy gear and explosive baseballs. Rather than being a gimmick they’ve fully packaged with subtle changes, like a focus on their profit margin and public perception. The marketing has mishandled them slightly, with Channing Tatum only appearing in a supporting role while Pablo Pascal takes up the mantle of principle Statesman and yet somehow doesn’t get his name on the poster. It’s almost of the level of Hail, Caesar! in how much the marketing misrepresents the cast.

What makes Kingsman: The Secret Service so inherently rewatchable is that it had zero filler. Every scene is spot on perfect, there’s nothing that felt superfluous. The same cannot be said of the sequel. Halle Berry as Ginger Ale feels more like filler than her role in X-Men. She’s the counter-point to Merlin and in the middle of the film she talks about really wanting to be a field agent, completely out of the blue. At the end of the film this comes up again but it absolutely does not feel like they earned the resolution that was delivered. There’s no backstory, no set-up and no arc. Halle Berry and Channing Tatum only seem to exist to fill out roles in the telegraphed sequel. 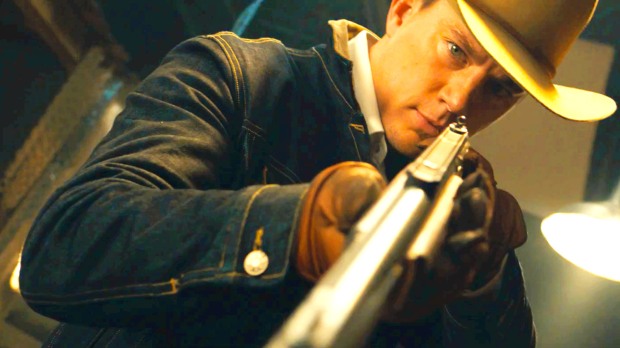 The biggest disappointment for me was the lack of Lancelot (Sophie Cookson). Roxy was a damn good character in the original and we were hoping to see her play a larger role this time around. We could’ve learned more about her, but sadly she only rates a brief appearance.

So there’s some clunkiness, but The Golden Circle is still fun. Poppy is a ridiculous and entertaining villain, there are some good set pieces, the action is as imaginative and fanatic as before and the cast are all charming. If you liked the first this will be an enjoyable night out, even if it isn’t on par.