We live in a volatile political climate right now.  Daily I have to watch fake news outlets like CNN, MSNBC, CBS, The Washington Post, Sunday Shalom, VIBE, and the Nashville Christian Advocate attack our President, Donald J. Trump, who’s proven time and again to be an honorable man with remarkable hair and skin tone.  I’m forced to endure so-called “scientific” and “health” journals like Scientific American,  Journal of the American Chemical Society and TIME telling me to “recycle Darth, eat more vegetables Darth, don’t dump toxic waste in your neighbor’s yard Darth” until I want to puke.  Fuck you!  I’m going to continue  to take the plastic ring from my Bud Light six-pack, go directly to the ocean, and stuff six fish in each hole.  I’m going to keep gargling with hot fudge.  And I’m going to keep dumping my paint thinner, wood varnish, ammonia, and tire foam shake into Brad’s garden because he’s a douche.  You know why?  Because this is ‘MURICA!  And incidentally when EXACTLY is TIME going to publish a story ABOUT time?  I asked my friend Harvey the same question last week and he had the perfect response: “DAT ASS THO’!”  He’s a wise man.

Yet with all the garbage going on in the world this is my favorite time of year.  Despite the liberal war on Christmas, I can’t help but feel joyful.  And one of my favorite things about the holiday season is Christmas specials.  I ADORE  Christmas specials.  Growing up my favorite was always Rudolph the Red Nosed Reindeer.  The other night I sat down with my son to watch the television special for the first time in three years.  I was excited because this was the first time he’d ever watched the program.  Within ten minutes however I turned the show off in horror.  My child was upset, but I quickly calmed him by changing the channel to Fox News which was running its own human interest holiday program,  A Very Klan Christmas.

Now you may be asking yourself at this moment, “Darth why did you change the channel?  Sure A Very Klan Christmas is delightful family values fare, but Rudolph is a classic!”  Yes, dear readers.  It is a classic.  Classic liberal propaganda.  I’ve seen this special multiple times however it wasn’t until this year where I finally saw the light.  I can only attribute it to the online Intro To Political Science class I took in the Spring via Info Wars.  (Side note:  Professor Alex Jones was just a delight.  And I only had to spend $50 on the class and $5000 on his protein supplements.  The D I got was totally worth it.  Plus it’s not transferable to any school in the nation!)  Think this sounds crazy?  Let’s do a deep dive and then you can decide for yourself.

Take our tacit hero Rudolph.  He represents a demonized version of American conservatism.  A political outcast who because of his conservative nature  (not so subtlety symbolized by the red nose) is denied participation in any Reindeer Games, or the democratic process if you will.  While his father outwardly pretends to love Rudolph (“You’re my boy!”) he’s clearly a slave to liberal demagoguery, going so far as to hide Rudolph’s red protuberance under a fake nose.  I wish to God they had CPS at the North Pole.  However, the real liberal socialist monster in this case is Rudolph’s coach Comet, a coastal reindeer elite.  He’s clearly a thinly veiled version of Elizabeth Warren.  PochaComet delights in “spreading the wealth” of the Reindeer Games among his brethren–as long as you’re one of Comet’s communist cronies.  Otherwise you’re excommunicated. The message is clear, submit or be ostracized.

“Good thing we are in this together huh Hermey?”
“Here’s your 30 pieces of candy cane you Judas!”

Outcast, Rudolph makes the bold choice to embrace his conservatism rather than join up with Santa’s (AKA Satan’s) Leftist liberal cabal.  It’s a choice that at this moment makes every decent conservative cheer…and makes what’s to come so much more devastating.  Thankfully, Rudolph doesn’t set out alone as kindred conservative spirit Hermey sets out with the resilient reindeer.  Hermey himself has experienced a similar situation being denigrated by the Head Elf for wanting to be a dentist and not make toys.  Wow what a terrible sin to want to do something else other than the state-funded-liberal group-think position of a toy maker.  Pathetic.  And don’t get me started on the Head Elf.  Not only does he berate Hermey for his dreams, he proves a sycophant to Santa.  Dude has his nose so far up Santa’s posterior he can probably taste the gingerbread on that fat ass’s tongue.  For Trump’s sake the guy uses two voices!  One simpering and servile for Santa, the other authoritative and menacing for the elves.  SAD.

The dynamic duo are also joined by a third member, Yukon Cornelius, again a vilified conservative stereotype who’s obsessed with silver and gold.  As if unchecked capitalism, greed, and personal self-interest to the exclusion of all others is somehow a bad thing.  God bless Yukon and all he represents.  I hope he receives a nice fat tax cut this year.  He’s earned it.  Unlike those lazy troglodytes at Santa’s Workshop who just expect it.  You went to Applebees in May last year.  Sorry moneybags no tax return this year.  I don’t want to hear about how you’ve already got three jobs or how you’re 50,000 Candy Canes in debt to Elf U.  Go get a fourth job and put down that cocoa.  Cocoa is for closers.

And on their travels the trio eventually stumbles onto the Island of Misfit Toys.  Judas Priest riding a T-Rex with the cavemen!  Never have I seen a more outwardly gross display of liberal sensationalism in my life.  The island, as the name suggests, is full of “misfits,” toys that are different and have been abandoned.  Ones like the “Charlie in the Box” or the train with the square wheels.  What the island actually represents is a festering cesspool of extreme leftist drivel.  The island serves as a safe space for all these misfit snowflakes to wallow in their millennial-everyone gets a trophy, entitled delusions.  We are somehow supposed to believe they are victims of the gentle and moral alt-right.  They are just waiting to be saved by Bernie Claus so that King Moonracer and the rest of the 457 non-normative gender identifying misfits can get free college.  But sadly Rudolph cannot see through their ruse and the misfit toys brainwash him into agreeing to tell Santa to come and get the misfits and find good homes for them.  I say build a wall around that island and make the spotted elephant and the cowboy who rides an ostrich pay for it!

Soon Rudolph abandons his friends and although Sam the Snowman states that Rudolph returns home because “he grew up,” I believe it’s because the liberal corruption finally took hold.  In any event he gets home only to find his parents and girlfriend kidnapped by the Bumble.  Of course typical liberals, they get in trouble and have to have someone else bail them out.  Rudolph’s parents didn’t deserve him.  And what happens next is so obvious and on the nose they might as well have thrown my autographed copy of The Art of the Deal into my gold-plated  fireplace to get my attention.  Hermey saves everyone by removing the teeth from the Bumble.  Obviously this is a rally cry for “right-minded” citizens to remove the metaphorical “teeth” of the alt-right from the “mouth” of the nation.  As if it’s a festering  tooth that must be pulled.  PUH-LEASE.  Of course that Brutus, Yukon ends up betraying his conservative values by bringing the Bumble to Santa’s workshop to get a “job”  when really he’s just joining Santa’s cadre of liberal slave minds. 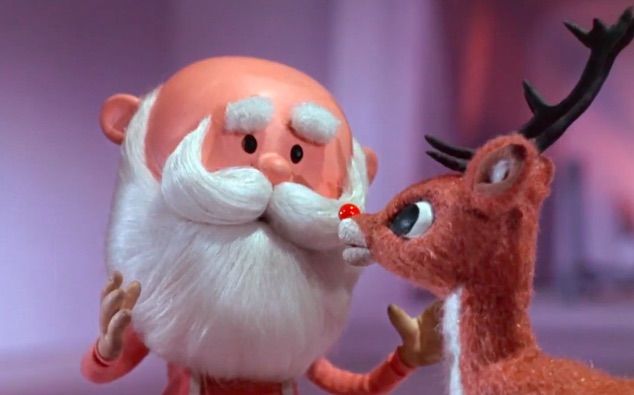 “Fuck you old man. You had your chance.”
–What Rudolph SHOULD have said

Then!  Oh then.  When a storm threatens to cancel Christmas, Bernie Claus turns to Rudolph to help him guide his sleigh.  Oh so NOW you need help from the conservative outcast.  The one you chastised and mocked.  Funny how that happens with liberals.  They just bash conservatives until it suits their purpose not to.  If I was Rudolph I would have told Santa to shove his bag of toys straight up his fat, white, entitled ass.  Unfortunately, Rudolph’s descent into total far left liberalism completes when he agrees to guide Santa’s sleigh.  Damn it Rudolph!

Of all the characters in this abomination of a “Christmas” special the only one in my mind who comes out a hero is Hermey.  Turns out that his removal of the Bumble’s teeth was just a ploy.  He convinces the Head Elf to set up his dentist shop.  That way he can chip away at the liberal nest from within by removing their teeth and replacing them with conservative dentures.  Maybe he even got to waterboard the Head Elf.  I hope so.

If my position seems extreme I promise you it’s not.  Go back and watch it yourself now that you have my information.  You’ll see.  In fact I’ve become suspicious of ALL Christmas specials.  Next on my docket  is to analyze the Karl Marx of children’s stories, Dr Seuss, and his How the Grinch Stole Christmas.  Pretty sure the singing by the Whos at the end represents Gay Pride Day.  What about Lorax Pride Day you commie bastard!?  How the Grinch Stole Christmas.  Nah.  More like How the Grinch Replaced Your Core Values With ISIS  Extremism.  Now if you’ll excuse me I have to go yell Merry Christmas from a bullhorn at a Progressive rally.  Can’t wait to see them get triggered.  It’s the little things my friends.

*I hope you’ve enjoyed my satirical article.  A very Merry Christmas to all of you!

At last I am free of independent thought.