There have been several slasher movies made over the years which sees sorority girls hacked up at the hands of a mad man. Yet there are only a few which are still remembered by horror fans. One is of course Bob Clark’s underrated masterpiece Black Christmas, and there is also 1983’s the House of Sorority Row. This is another fine example of a flick which was derided by mainstream critics, yet is still loved by fans of the genre.

Inspired by the classic French thriller Les Diaboliques, the film features seven sorority sisters who have grown tired of the strict rules of their house mother, Mrs. Slater. A prank meant to get revenge on the old woman goes out of hand and ends with Mrs. Slater’s murder. With a party coming that night, the sisters dump the body in the filthy pool in their backyard to hide what they have done. As party goes on, an unseen killer preys on the sorority girls one at a time wielding an all-too familiar cane. It appears as though they did not finish the job, and now Mrs. Slater is coming for revenge. But the one stalwart and empathetic character Katey discovers that their may be someone else behind the killings.

While the plot sounds very by the numbers, hitting all the plot points you would expect

from a slasher flick. What sets House on Sorority Row apart is the atmosphere and unexpectedly high levels of suspense. Rather than indulge audiences in high levels of fun gore and splattering blood, most of the kills are quick and kept in the shadows. Rather than bask in the violence, audiences are given a jolt as the kills occur with lightning speed without giving time to process it. Tension is already high throughout as the girls face a number of challenges trying to hide the body of their victim during a raucous college party. Thus the addition of a killer adds perfectly to the mix. It also means that in the climax when the violence is cranked up, it has that much more impact.

First time director Mark Rosman should be commended for his work on this flick. Not only does he keep the suspense levels right where they should be, but the movie looks gorgeous as well. Rosman’s use of shadows and colors is almost Dario Argento-esque in some spots. In one particular scene, when the survivor girl, Katey, is drugged as bait for 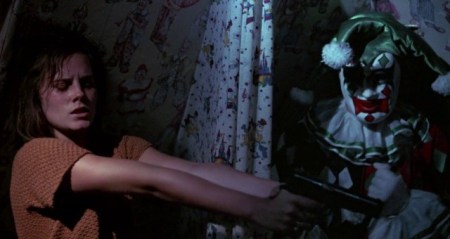 the killer, every little thing that happens is perfectly timed and executed to creepy and trippy effect.

The House on Sorority Row while not a perfect movie, is a very enjoyable slasher flick. It was remade in 2009 like so many other classic genre flicks, but the original proves to be far superior.