Recently one of the all-time great leading men Kirk Douglas passed away at 103. After a stint in the navy during World War II, Kirk Douglas made his way to Hollywood looking for work as an actor. He made his screen debut in the classic film noir, the Strange Love of Martha Ivers in 1946, and immediately made an impact. This launched career which saw him star in many of the all-time great films, receiving acclaim from audiences, critics, and his peers. Douglas used his popularity to fight back against the witch hunt of McCarthyism which plagued Hollywood during the Cold War. In 1954 he would marry Ann Buydens, and in a rare Hollywood feat these two remained married until his passing. Their son Michael Douglas has gone on to have a stellar film career of his own. Though he may no longer be with us, Kirk Doulgas has left a cinematic legacy which would be envy of anyone, so it is only fitting we shine the Spotlight on: Kirk Douglas. 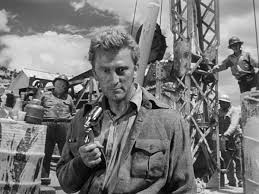 Ace in the Hole: My personal favorite film of Kirk Douglas’ sees the actor working with legendary writer/director Billy Wilder in a thought provoking thriller. Douglas plays disgraced journalist Chuck Tatum, whose career built on lies and sensationalism has fallen apart. The only place he can find work is for a small local paper in New Mexico where he still dreams of hitting it big. When the owner of a local mine becomes trapped in a cave-in, Tatum realizes this could potentially be the story which puts him back on top. Manipulating the local law enforcement and working with the miner’s cold and calculating wife, he manages to make the situation far more dangerous than it should be. A life is needlessly endangered while, the site of the mine is turned into a media circus with Tatum as the ringleader. By the time he grasps the full consequences of his actions it proves to be too late.

The Strange Love of Martha Ivers: This 1946 classic would see Kirk Douglas make his screen debut reprising a role from the stage at the behest of his old friend Lauren Bacall. This film noir sees Kirk Douglas share the screen with Barbara Stanwyck who was in the prime of her stardom. Years ago young Walter stood by Martha Ivers, whom he would go on to marry, and corroborated her story to the police upon the girl’s murder of her tyrannical aunt. Now as an adult Walter is the district attorney, but he is insecure about whether Martha married him for love or to reward him for helping her. As misfortune would have it an old face from their past returns to town in the form of Sam, the other person who knows their secret. Convinced Sam wants to blackmail him; Walter engages unsuccessful intimidation tactics. Tensions run high between; Walter, Martha, and Sam until eventually things turn deadly.

Paths of Glory: One of the grittiest and harshest war movies ever made, as the legendary filmmaker Stanley Kubrick used this film as a platform to speak out against war itself. Kirk Douglas plays the lead role of Colonel Dax, a man in the French army during the harshest days of World War I charged with planning and executing a suicide attack on the German “anthill”.  When the men refuse, an over eager general goes so far as to fire on them to motivate the attack. Because of this disobedience of a foolish order each of the three units must put forth someone to face the consequences. Dax takes it upon himself to defend the trio and even discovers proof that the general fired on his own men. But in the end war is hell and nobody gets what they may deserve. Though he was initially hesitant about the movie, Douglas would throw his star power behind Paths of Glory which would become one of the most important films about the subject of war.

Spartacus: With the talents of Stanley Kubrick and Dalton Trumbo behind him, Kirk Douglas found great success as the producer and star of this epic. As a slave in the early years of the Roman Empire, Spartacus is seen is nothing more than a gladiator to entertain the masses. But when his lover Varinia is torn away by his cruel masters, Spartacus inspires a rebellion among his fellow slaves to reclaim their freedom. Not merely content with earning his freedom, the former slaves unites his fellow gladiators in forming a formidable force to liberate others like them. Along the way he experiences military triumphs and becomes popular among the people, much to the chagrin of his enemies. While his ultimate quest is an ill-fated one and he and his men mean a memorably violent end, Spartacus becomes more of a legend than a man. For many this is seen as Kirk Douglas’ defining role as he turned a Thracian slave into one of cinema’s most memorable characters. 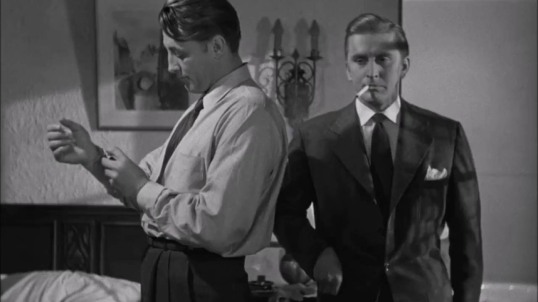 Out of the Past: A seminal movie of the film noir movement, Out of the Past sees Douglas portray a particularly memorable villain. Starring alongside noir icons Robert Mitchum and Jane Greer, he plays the shady businessman Whit Sterling who pulls world weary PI Jeff Bailey out of retirement. It seems as though an ex-girlfriend has shot Sterling and taken thousands of dollars from him, and he just wants her back….so he claims. When the investigation becomes complicated and the detective becomes entangled with the thieving girlfriend, Whit’s accountant threatens to expose his corruption to the feds. He strong arms Jeff into dealing with this issue as well only to discover a conspiracy at play.

20,000 Leagues Under the Sea: When you think of the fun swashbuckling live action films from the golden years of Disney this Jules Verne adaptation should no doubt come to mind. After his ship is mysteriously sunk, Douglas’ character Ned as well as a scientist and his assistant are brought onboard the Nautilus captained by the dangerous and enigmatic Captain Nemo. While his companions are drawn to Nemo’s intellect and exploratory nature, Ned is more concerned with the treasure contained upon the advanced submarine. As the captain’s dangerous side grows more and more pronounced Ned knows he has to find a way to escape, if there is such a way. With his co-stars being the likes of older Peter Lorre and Paul Lukas, the film’s famous action scenes were usually carried by the Douglas in this classic.

The Bad and the Beautiful: This classic sees Douglas leading an all-star cast under the helm of acclaimed director Vincente Minnelli. A director, a screenwriter, and a star our all contacted by a producer named Shields, a producer they each have less than favorable history with. One by one they recount to Shields’ partner what went down between the producer and each of them. As the stories they, they come to the realization that while the producer may have cut ties with them he launched their careers and all three of them reached new heights upon striking out away from him. The Bad and the Beautiful was one of the most acclaimed films of 1952 and Kirk Douglas received an Oscar nomination for his performance. 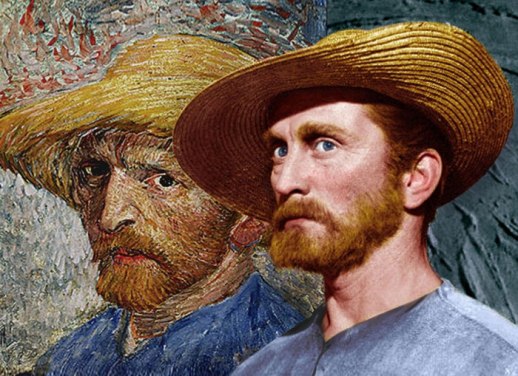 Lust for Life: Though he is now revered as one of the greatest artists to pick up a paint brush, the life of Vincent Van Gogh was filled with heartache and struggle. This tragic figure from history is brought to life to perfection by Kirk Douglas in this acclaimed biopic. While pursuing a life in the ministry, Van Gogh is met with rejection and unfulfillment. Things change when he discovers a gift for painting and leaves for Paris to practice his skill and begins a relationship with a prostitute in the process. As history tells us this legendary artist would find fleeting moments of happiness before the crushing pain of depression would weigh down on him, ultimately driving him to end his own life. Douglas’ portrayal of the impressionist artist would go on to earn him a Golden Globe as well as an Academy Award nomination.