The Doctor Who story City of Death has quite a legacy. Rewritten (from an original story by David Fisher) over a weekend by Douglas Adams, armed with nothing but a typewriter and a bottle of whiskey, it took the Doctor and Romana to Paris on a shoestring budget and public holiday weekend meaning many of the shooting locations were closed. All these hurdles overcome, the story was screened on the BBC during an ITV strike. This in mind, but not to take away from the glory, it managed to gain 16 million viewers by its fourth and final episode, making it the best rating Doctor Who story ever broadcast. Contemporary reviews criticised the humorous tone, but we now know it is an absolute classic work of Douglas Adams and also a very good Doctor Who story. Adams was offered the chance to novelise his Who stories in the 1980s, but there was the small matter of his becoming a bestselling writer with The Hitchhiker’s Guide to the Galaxy in 1979 and the pitiful fee on which Target Books refused to budge. Consequently, no Adams stories ever made it onto paper.

Fortunately for we fans, nothing is sacred in the 21st century, so both SHADA (unfinished for TV due to a strike at the BBC and hence one of the great “what might have beens” of Doctor Who) and City of Death have both recently been novelised. SHADA was very well received, and so its writer, Gareth Roberts, was almost immediately commissioned to adapt City of Death for the page. Eventually, he passed the baton to James Goss, playwright and Doctor Who novelist, and it is his final product I am finally about to review.

The story, like that of the Adams script, sees the Doctor and Romana arrive in Paris in 1979, just in time to intervene in an art theft racket that stretches across millions of years. Teaming up with the blunt instrument British detective, Duggan, they seek to prevent Count Carlos Scarlioni from messing with the time stream to prevent fragments of himself being spread throughout Earth’s history. This will take them from 1979 to Renaissance Italy and the very studio of Leonardo da Vinci, right back to the primordial swamps of Earth’s earliest existence. Can the Doctor prevent the destruction of life on Earth? Can Romana keep everyone sane whilst battling her first hangover? Will Duggan ever stop hitting people? Read on to find out… 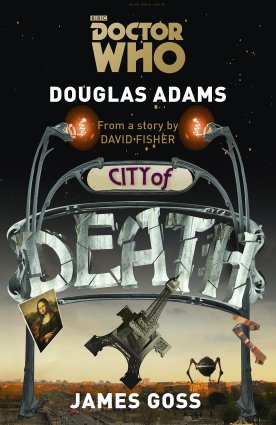 Right from the off, James Goss acknowledges his debt to Douglas Adams, with a clear desire to evoke Adams’ tone without directly aping his style. We meet the creature at the centre of the drama, Scaroth, soon to be Last of the Jagaroth, and he is instantly three dimensional. Well, twelve dimensional after a fashion (spoilers!). The first few pages have a narrative depth seldom matched by the classic series; City of Death for the screen, while witty, suffers from this lack of depth, so it’s nice to see Goss really work to flesh it out.

Based as it was on the script as well as the broadcast version, Goss’s adaptation even contains scenes that didn’t make it to the screen. Motivations are better understood, incidents better explained, and characters are better developed. Countess Scarlioni receives a first name (Heidi) and becomes a force to be reckoned with in the story, and her husband the Count/Scaroth even becomes sympathetic. In a very Adams-esque move, Goss even grants some cameo characters a full back story, which I didn’t even realise until their corresponding appearance in the TV story is reached in the novel.

Thanks to the script, the Doctor is perfect, but it’s with Romana that Goss shines. She becomes likeable as well as charming while still remaining a bit pompous. A good portion of the story is from her perspective as she becomes lost in Paris with Duggan, who becomes a little softer and despite being well out of his depth, still manages to show her a good time. Of all the characters, Romana is the most relatable, with the story’s insanity contrasted with her attempts to remain rational.

City of Death is an absolute must-read for fans of Doctor Who and/or Douglas Adams. A comedic tour de force, it keeps the pages turning with brilliant one-liners and a competent narrative that will have you laughing out loud. This is justifiably recognised as one of the all-time great Who stories, and James Goss’s interpretation does not disappoint.

One thought on “Book Review: “City of Death”, by James Goss”