The Lord of the Rings had a huge cast of characters, many of whom were introduced at different intervals throughout the movie and were easily distinguished by the different races they represented. Newcomers have no trouble telling their Gandalf from their Gimli and their Boromir from their Bilbo. The Hobbit doesn’t provide that luxury and quite literally drops a dozen bearded and bushy haired dwarves on the doorstep. Although each is quite unique and has their own role to play it doesn’t hurt to have a guide to the 13 adventurers, and the actors who play them. 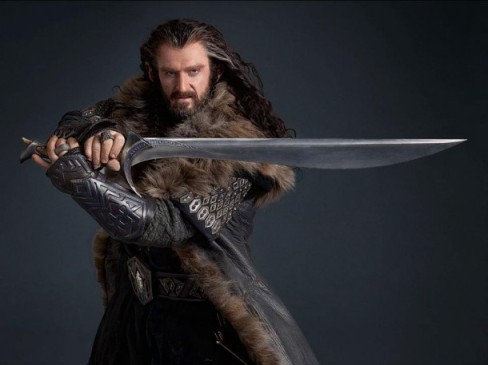 The Dwarf: Thorin is the leader of the party and seeks to reclaim his throne. Like Aragorn he’s a displaced king, but unlike the ranger Thorin is determined to fight for his birthright and banish the dragon Smaug from the Lonely Mountain. He earned his name while battling the orcs for Moria and pushing back Azog with nothing but an oak log. He’s ferocious in both battle and leadership, rarely giving an inch. During the course of the film he will have to reconcile his anger at the Elves with his quest and learn to see the value in others to earn his treasure back.

Where You’ve Seen Him Before: Armitage has been making his mark in a few different places lately and should be familiar to geeks. He’s played Lucas North in Spooks for three years and Guy of Gisbourne in Robin Hood on television. Cinema-goers would best know him from Captain America in which he shot Dr. Erskine and got beaten up by the Cap.

The Dwarf: Dwalin is the most physically imposing member of the group, and the first to arrive on Bilbo’s doorstep (which must’ve come as a fright). His menacing appearance is heightened by the elaborate tattoos he has across his scalp which provide an illustrated biography of the dwarf (although McTavish claims that one reads ‘if you can read this I must be punching you’). Naturally Dwalin is the group’s muscle, and is fiercely loyal to Thorin.

Where You’ve Seen Him Before: McTavish has had small parts in a number of action movies, such as Rambo, but it’s his vocal chords you’ll be most familiar with. He’s Marvel’s go-to guy for voicing Loki in their animated movies and shows, and he also plays Sebastian Shaw on occasion. He’s lent his voice to a number of popular recent video games such as inFamous 2, Uncharted 3, Assassin’s Creed 3, Modern Warfare 3 and the title character of Dante’s Inferno.

The Dwarf: Balin operates as a deputy to Thorin, having fought alongside him at both Erebor and Moria. He’s a wise and gentle dwarf who plays a key role in helping the other members of the party find their trust in Thorin and accept Bilbo into their fold. Unlike his brother Dwalin he is not eager to rush into battle but never fails to take up arms when required, and provides a good service keeping watch when required. Balin is one of the few to be mentioned in Lord of the Rings when the Fellowship find his tomb under Moria.

Where You’ve Seen Him Before: Stott has been a regular feature in British film and television for more than thirty years, but this geek best remembers him as Detective Inspector McCall in Danny Boyle’s Shallow Grave. 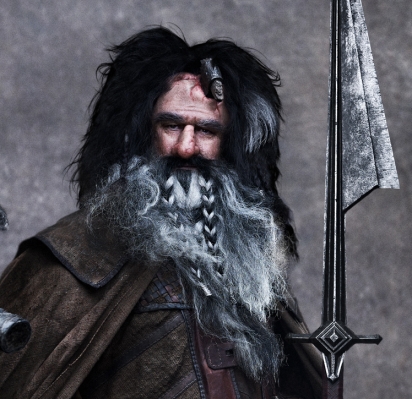 The Dwarf: Bifur was once a reasonable chap, even after his family was driven from their home by Smaug. During a subsequent battle with orcs he had an axe embedded in his skull, and the rusting head of the axe has remained there ever since. His cognitive function has been damaged as a result, leaving him forgetful, inarticulate and downright insane when in battle. He doesn’t speak often any more, but when he does it’s only in old Khuzdul or with hand gestures.

Where You’ve Seen Him Before: Kircher does not have an extensive filmography, his last role before The Hobbit being that of ‘Merchant’ in Legend of the Seeker. After his turn as Bifur we can hope to see him in bigger roles. 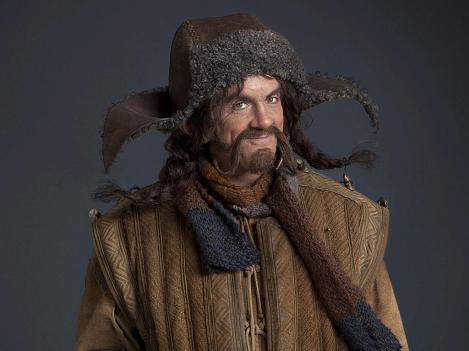 The Dwarf: After being exiled from Erebor, Bofur found his calling as a toy-maker. Although he chose to lead a quiet life he still answered Thorin’s call to join his company and take back their home. Throughout the quest he maintains a cheery demeanor and readily enjoys a song or a drink. His easy going nature belies his rough life, and he amuses himself teasing his brother Bombur and Bilbo.

Where You’ve Seen Him Before: Nesbitt has been working steadily in both comedy and drama roles for almost thirty years, appearing in Waking Ned Divine, Cold Feet, Murphy’s Law and Bloody Sunday. His most striking role in recent years was scaring the shit out of everyone in Stephen Moffat’s Jekyll.

He just wants to play lion.

The Dwarf: One thing that rapidly becomes clear is that Bombur is fond of eating. This trait leads him to become the groups chef, a role that earns him a small amount of respect from his peers. Bombur is something of a clown without being as waspish as his brother Bifur – although his physical comedy is not always intentional. Whilst soft-hearted he never shies away from fighting alongside the other dwarves.

Where You’ve Seen Him Before: Hunter is a relatively new talent on our screens, mostly appearing on television in Australia and New Zealand. He certainly gets credit for parodying the despicable radio host Kyle Sandilands (a downright horrible piece of sputum).

The Dwarf: Fili is the older brother to Kili and the two are rarely separate from each other. As Thorin’s nephews they were among the first dwarfs to join his company. Fili is the more responsible of the two, taking his ancestry seriously and seeing this quest as an opportunity to prove himself as a warrior of noble birth. Of the group the two brothers are more active in battle, seeing their role as protectors of Thorin.

Where You’ve Seen Him Before: O’Gorman is best known for his television work, more recently in a lead role in New Zealand drama The Almighty Johnson. International viewers would know him best as Luke Morgan from a 25 episode run of McLeod’s Daughters.

The Dwarf: Like Fili, Kili is dedicated to supporting Thorin’s cause. Kili has never been involved in a war or a quest of this scale, but he was raised on Thorin’s tales of battle and rushes headlong into the challenge. At times he is reckless, putting glory on the battlefield ahead of his own safety. Much like Fili he is dedicated to protecting Thorin.

Where You’ve Seen Him Before: Turner is a rising star on television, with his most recent role as one of the leads in Being Human where he plays a vampire hospital worker trying to pass for normal. 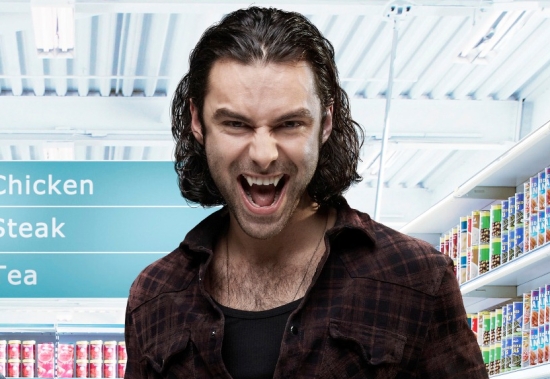 The Dwarf: Oin is one of the oldest members of the party and finds it difficult to hear without the aid of his ear trumpet. This doesn’t prevent him from holding his end up during battle, fending off foes with his iron staff. Coming from a life as an apothecary he carries a number of potions and aids to assist the other dwarves over the course of the journey, and falls into the responsibility of starting the fire at every camp.

Where You’ve Seen Him Before: You’re more likely to have heard Callen rather than have seen him on your screens. He’s a frequent contributor to the voice cast of Power Rangers and played Zuka in Knights of the Old Republic II. 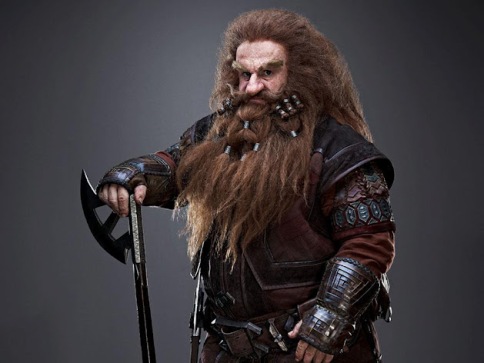 The Dwarf: The name ‘Gloin’ will already be familiar to viewers of Lord of the Rings, except it was usually preceded by “Gimli, son of…”. The apple has certainly not fallen far from the tree as Gloin is a prickly character who, like Gimli, is quick to temper. Although loyal to Thorin, Gloin is the most outspoken of the company and would frequently challenge Thorin. Regardless, Gloin’s axe is usually one of the first weapons swung in a conflict. Unlike the rest of the company Gloin has left a family behind, his wife (an acclaimed beauty with a fine beard) and Gimli both await his return.

Where You’ve Seen Him Before: Peter Hambleton has been a regular feature in TV movies and shows, but has not had a major breakthrough part yet. Still, you’d recognize him from The Strip, Spies and Lies and Paradise Cafe.

The Dwarf: Nori is possibly the most elusive and reserved member of the company. Before joining Thorin and his brothers Ori and Dori he lived in the wilderness and made his living as a poacher and a thief. He’s often found himself in trouble with authorities but this doesn’t change his loyalty towards Thorin and his quest to retake Erebor. At the outset he may not seem like the most dangerous member of the party but he keeps a range of knives hidden about his person (dwarfson).

Where You’ve Seen Him Before: Followers of Peter Jackson’s career may remember Brophy from his previous works Braindead (or Dead/Alive) and King Kong. He also played the police chief in District 9, but it’s hard to remember him as anything other than the zombie whose intestine’s went on the attack in Braindead. 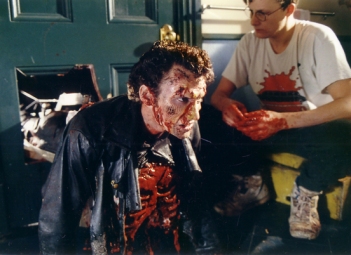 The Dwarf: Unlike many of the other dwarves in the company Dori remains suspicious of Thorin and Gandalf, questioning who is really set to benefit from the dangers they put themselves through. Ultimately he’s there for his brothers Ori and Nori, with whom he holds a parental role. This assumed authority has, in the past, put him at odds with Nori, who disliked being talked down to. The relationship is further complicated by Ori starting to see the rebellious Nori as someone to emulate. Despite his grumbling Dori is a decent sort who has his brother’s best interest at heart. During the quest he also takes Bilbo under his wing.

Where You’ve Seen Him Before: Like Brophy, Hadlow is a Jackson regular having voiced Heidi the Hippo, Robert and Barry the Bulldog in Meet the Feebles and featuring as a struggling vaudevillian actor at the beginning of King Kong.

The Dwarf: Ori is the youngest member of the group, almost ten years younger than Fili and Kili, and as a result is frequently doted upon by the rest of the dwarves, especially his brother Dori. This protective attitude from the others is evident in the knitted sweater and mittens he seems burdened with. He’s a politely spoken and well raised dwarf who chronicles the journey along with drawings in his journal. It’s his account of Balin’s death that Gandalf is seen reading from in The Fellowship of the Ring.

Where You’ve Seen Him Before: You haven’t! The Hobbit is Adam Brown’s film debut but given Jackson’s eye for talent in the past he could become more familiar in the future.