Cheap Game Tuesday: ‘I Have No Mouth and I Must Scream’ iOS

Ok, so I’m about to go on a road trip so let’s see if there’s a decent time waster in the App Store…

A week or so ago the line up of new releases on the App Store on my iPhone included ‘I Have No Mouth and I Must Scream’, a classic point and click psychological horror from the 90s. There’s two reasons this came as a surprise. Firstly, it’s not an obscure title but it’s hardly in high demand. There’s going to few gamers who aren’t from the era who’ll know it, and even then it was never a best seller. The second reason is that it goes above and beyond the content restrictions that normally get Apps a ‘No Rating’ classification that prevents sale in the App Store. This game is seriously dark. 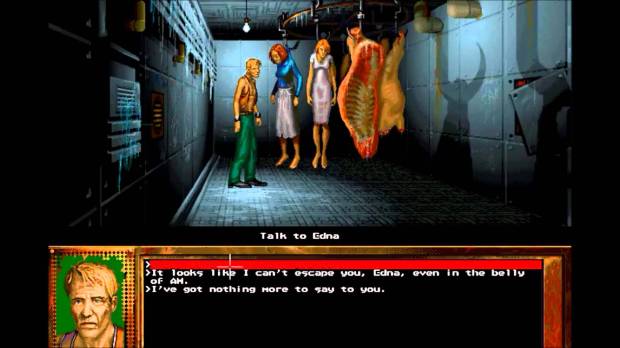 Some context. Controversial sci-fi writer in Harlen Ellison penned and published the short story of the same name in 1967 where is was held in high acclaim. It was set on in the future after the US, Russia and China had each built a supercomputer to co-ordinate their wars. The US computer became sentient, absorbed the other two computers and wiped out the human race. He kept a group of five humans alive to experiment on and torture, and the story focuses on them living through the hell created for them.

The game of the same name was released in 1995 and builds on the premise laid out in the story. The player takes control of each of the five characters in turn and solves their individual scenario before trying to take over the computer, AM, himself. We have Gorrister, tormented with grief over the institutionalisation of his wife. Ellen is a successfully engineer fraught with anxiety and fear of the colour yellow due to a past trauma. Benny is a soldier who killed his troops for failing to meet expectations, now physically and mentally mutilated by AM and starved for years. Nimdok in an elderly man with amnesia whose past is tied to Nazi concentration camps. Finally there is Ted, a con man who AM has made intensely paranoid. They get trapped in a range of areas such as a pyramid filled with disused electronics, a medieval castle and a stone age village sacrificing their people to AM. 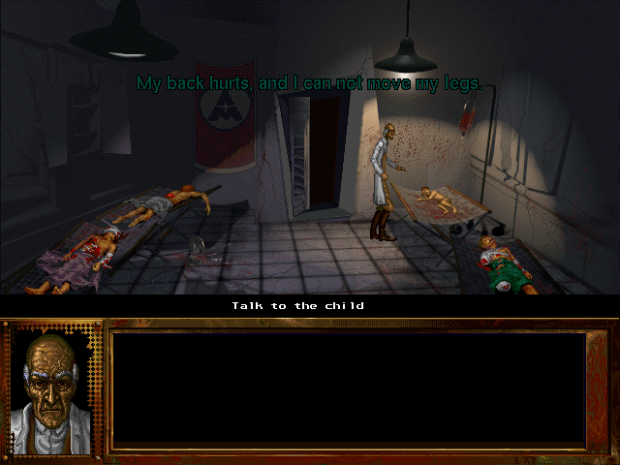 If you’ve played any 90s point and click adventure you know how the gameplay works. You use a set of commands to move around the area, collecting items and talking to people to solve puzzles to progress in the story. The touch controls have been well implemented and the game plays well on the smaller device. Compared to the Lucasarts games some of the puzzles can be downright illogical, so don’t feel bad if you have to find the solution online. For the most part enough critical thinking will get you through, but the story takes some odd turns. This adaptation has brought the game across really nicely but we have encountered some animation glitches, such as the animation doubling up or freezing, leaving characters standing still while their actions play out invisibly. Subtitles are also a problem, with some sticking on the first line while the audio plays out. If you’re playing without the audio, you’re screwed. One more issue – the voice of the computer is provided by author Harlen Ellison and although it’s treated as a major selling point it is not a good fit. He’s not menacing and doesn’t sell the twisted philosophy of the character. Compared to other evil AI like HAL9000 and GLADOS it’s pretty poor.

Now to the darkness of the game. Amid AM’s psychological torture scenarios we get people impaled on meat hooks, living hearts eaten by talking jackals, senseless medical experiments on concentration camp prisoners, cannibalism of children, imprisoned with rapists and so forth. This game is very, very dark and challenges players with some confronting situations. Even without the puppy murdering deleted scene it’s amazing this has found its way onto the iTunes store.

Overall it’s an intriguing premise with a well executed story that will be of interest to players who enjoy the mind games the Silent Hill series used to offer. One more issue – the voice of the computer is provided by author Harlen Ellison and although it’s treated as a major selling point it is not a good fit. He’s not menacing and doesn’t sell the twisted philosophy of the character. Compared to other evil AI like HAL9000 and GLADOS it’s pretty poor.

3 thoughts on “Cheap Game Tuesday: ‘I Have No Mouth and I Must Scream’ iOS”