The Emotional Rollercoaster of Backing a Failed Kickstarter

Kickstarter has some had an amazing impact of the creative community. Now independent artists can go straight to the audience and ask for financial support rather than going through the traditional channels. Consumers can find new ideas and help bring them to life. I, personally, make use of Kickstarter for new and creative board games. Some of the most popular titles of recent years have come from Kickstarter, such as ‘Zombicide’, ‘Exploding Kittens’, ‘Secret Hitler’ and ‘Mythic Battles Pantheon’.

Unfortunately not all crowd funded projects deliver. Some crash and burn, the project creators disappearing from public view. Others turn hostile and turn against the backers. Sometimes they cannot meet expectations. Often it’s just bad luck, other times it’s bad management or lack of experience.

For backers this can be incredibly frustrating. The instinctive response is equatable to feeling cheated. When you’ve been involved with 50+ projects as a backer you’re going see a few fizzle out, and the backer community tends to respond the same ways.

So today we’re going to look at some of those responses using a current example: ‘Evil Dead 2: The Board Game’.

For context, this is a miniature based role playing game based on the cult horror movie. The company behind the project, Space Goat Projections, have had success in publishing licensed comic books based on Evil Dead, The Terminator and The Howling. In a move that pleased fans of these films, Space Goat announced their intent to branch in board games.

So the ‘Evil Dead 2’ board game launched. The campaign was highly successful, drawing in more than 6000 financial supporters. Estimated delivery of the product was November 2016.

How do we feel about this?

It’s remarkably easy to jump into Kickstarters. They can promise us the world and, so long as they deliver something they fulfil their legal obligations. Also we love supporting new creators, that’s what crowd funding is for. It becomes easy to overlook the red flags. And this project had them.

Yes, this was their first board game. But everyone has to make their first project and these guys seemed really passionate about the game and the source material. The real red flag was when SPG put out another project – ‘The Terminator: The Board Game’ – within a few months. They hadn’t delivered on one game and now they had another one to build from scratch with little experience, plus they promised a ‘The Howling’ game would be up for funding soon. Suddenly it felt like this small, inexperienced team had bitten off more than they could chew.

It was also pointed out in a feature on Board Game Geek that the game didn’t have anything solid to show us. The project page only showed CG renders of miniatures, not real miniatures, and only art samples. We soon learned that none of this was finalised and they’d have to go through the long process of having everything made and approved by copyright holders before it could be manufactured. This in itself made the estimated delivery date unrealistic.

Ok, you wish you hadn’t impulse clicked that button. But you have, now you just have to wait it out and eventually get what you paid for.

Things can go wrong. It happens. But sometimes problems arise that could have been avoided. ‘Evil Dead 2’ has had almost all members of management and the original design team for their games had left the company or been fired and replaced. It’s hard to maintain excitement in a project when the people who were making no longer wanted to be involved. This occurred long after the project should have been delivered, so we don’t blame people who want to get on with the next idea. But for those who have invested money and want results it’s frustrating and worrying.

So long as those left on the project are still passionate and dedicated and not spending their time bullying and harassing staff oh god damn it. 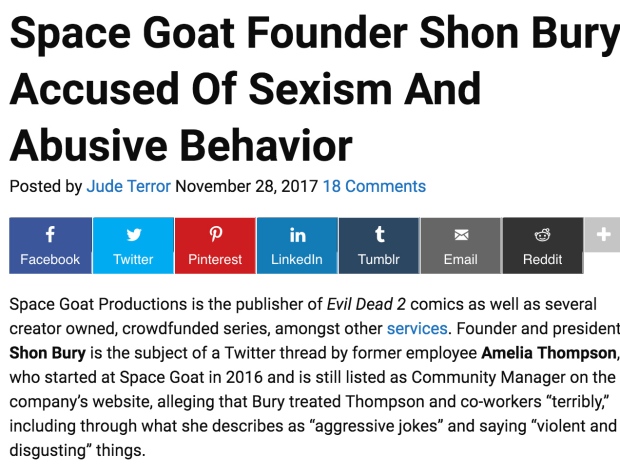 Now we know that we can’t get the full story, but we have seen Shon Bury blaming backers for the company’s problems and outright insulting them. One backer asked if it’s a conflict of interest for Space Goat to back a different ‘Terminator’ game designed by their previous designers and was told to ‘get a life’ by Shon Bury.

There’s a difference between a project being late and one you’ve lost faith in. ‘Deep Madness’ is a similarly complex game of a similar style which is also running very late. But it keeps us up to date with progress reports, humble explanations of the problems faced and whatever information they can provide as to the timeline.

‘Evil Dead 2’ want nothing more than for backers to leave them alone.

‘Evil Dead 2’ was fine. We knew it was running late, but they told us the reasons why. It was fine, we were on board. But over time the promised weekly updates slowed down. They got busy, they were sick, they were reorganising their staff, it was Chinese New Year…the excuses were pretty week.

Instead of updates they promised a special email newsletter. It would be less public, but fine. They really pushed for everyone to sign up for this magically weekly newsletter with the promise it would explain everything.

When we do get updates they are painfully shallow. Since the beginning of 2018 they just tell us that they’re getting the box right. What was wrong with the box? No idea, they won’t tell us. But for 14 weeks they’ve been ‘tweaking’ the box. They showed us the end result recently, typos and all.

Messages and comments on the Kickstarter page went ignored, so backers went to Twitter. Space Goat took down the Twitter account. So they went to Facebook, where SPG promptly closed their community comment section. If people raised questions in comments on their posts they got banned.

Feeling ignored by a company who should be working with you is frustrating enough, but when they’re actively closing doors on you it is outright maddening. Backers have started jumping up and down demanding refunds and claiming they’re getting law suits under way, which is…pointless.

Except that one backer who revealed they worked in fraud investigation and law enforcement. They suddenly got a refund.

They hadn’t even asked for one.

This is the point of any project where the anger at the creators and their lack of communication drives backers to take action…or what little action can be taken.

Here’s the crux of the matter. People hate having things hidden from them, or being barred from what they feel is their right. After putting money into a project and feeling like you should be treated with respect there’s few things more frustrating than getting the doors shut in your face.

With the lack of information and response from the creators, backers turn into junior detectives. People start dragging out rights and policies from the Kickstarter terms and conditions, questionable laws are trotted out and whatever information can be garnered is posted publicly. Public calls are made for reports to Kickstarter and business regulatory committees. The address and phone numbers for Space Goat Productions got posted in the comment sections with the suggestion that everyone should contact them.

Shortly after the investigator phase backers generally seek more action and things escalate into threats and arguments. Sometimes these threats are from the legal mind of armchair lawyers:

Everything started so well, with fans coming together to make something happen. Sadly things can turn south very, very quickly. Some backers even resort to calling each other names like they’re in a kindy playground.

Then there’s the people who become overcome by all the emotion and take this failed board game Kickstarter to have a life changing epiphany and threaten to leave.

Of course, all life-affirming social media declarations carry the weight of a dry sponge.

At the end of the day people will have to shelve the frustrations of a dud Kickstarter. It does look like Space Goat Productions are very slowly moving towards a finished product. Hopefully it turns out OK. The negativity which spilled out from the campaign and the problems it encountered will always be a dark cloud over it. If it doesn’t actually materialise people may be less trusting of the system. That’ll be a shame for the up and coming creators.

If you believe it, Space Goat Productions have asked for more money!

One thought on “The Emotional Rollercoaster of Backing a Failed Kickstarter”