A popular term among comic fans is “Parker luck” a reference to the beloved superhero Spider-Man and his uncanny ability to attract bad luck. Despite a superhero career dogged by misfortune a few moments truly stand out as the worst things to happen to Spider-Man.

Death of Uncle Ben: The very start of the Spider-Man mythos is rooted in tragedy, one he feels he could have prevented. Using his power to become a minor TV star, he watches a criminal escaping the authorities and does nothing to stop him feeling it was beneath him to do so. This lapse in moral strength ended up costing him dearly, when that same criminal murdered his Uncle Ben. Losing such an important figure in his life due to his own failings has been a driving force in Parker’s life ever since. For his entire superhero career he has tried to honor Uncle Ben by living by his mantra of “with great power, must also come great responsibility”.

Harry Osborn is a Drug Addict: Despite the fact that Harry’s father is one of Spidey’s greatest foes, he and Harry have traditionally been close friends. Naturally with one’s father being a workaholic businessman and a supervillain, Harry’s life had it’s fair share of troubles as he failed to create meaningful and developed an addiction to drugs. As his father’s secretive Green goblin activities continue, Harry begins experimenting with even harder narcotics. Parker eventually discovers his friend’s addiction problems in one of comicdom’s most iconic moments. For a while Norman Osborn takes care of his troubled son until he once again embraces his inner-Green Goblin. 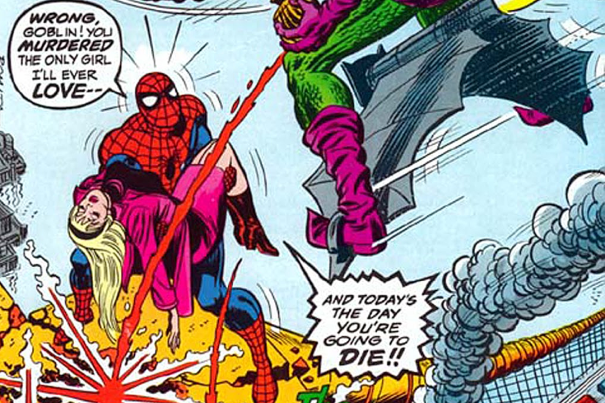 Death of Gwen Stacy: According to comic-lore, creators Gerry Conway, John Romita, and Roy Thomas waited until Stan Lee was preparing for a trip to Europe before springing on him that they were killing off one his most popular co-creations. Knowing “the Man” was too preoccupied with the trip to put up much protest For years Spider-Man and Gwen Stacy were Marvel’s strongest couple, and if House of M is to be believed she was the true love of Peter Parker’s life. In the classic tale appropriately entitled “the Night Gwen Stacy Died”, Norman Osborn snaps under mounting pressures and once again dons the guise of the Green Goblin. Looking for a grand showdown with his enemy Spider-Man he kidnaps Gwen Stacey and takes her to the George Washington Bridge to await the inevitable showdown. During the battle Gwen is tossed from the bridge and as Spidey uses his web to catch her, the whiplash of the sudden stop causes her neck to snap. Inadvertently Spider-Man killed the woman he loved something that would no doubt haunt anyone; while the Green Goblin was (temporarily) also killed in this fateful battle it was little solace to Parker. 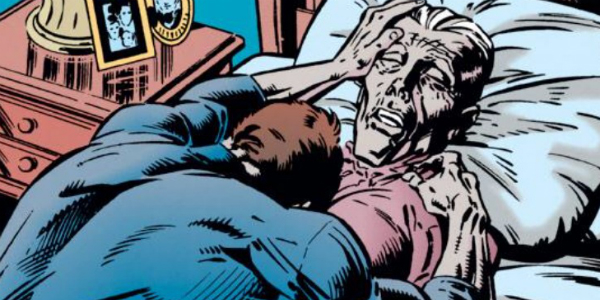 Death of Aunt May: As you may assume this is not the only time on this list this issue will pop up. In the midst of Spidey dealing with the ‘Clone Saga’ Amazing Spider-Man #400 featured Aunt May, the closest thing Peter Parker had to a parent, fall into a coma. For a moment, however, it seemed as though she had may a full recovery and got to spend a day with Peter and Mary Jane. Though things closed with her passing away leaving Spidey without his Aunt May for the first time. Granted it was later revealed she was merely an actress hired to impersonate Aunt May, but this does not change the fact that for a period of time as far as Spider-Man knew, Aunt May had joined the choir invisible.

Venom Symbiote: Following the major crossover event Secret Wars, Spider-Man emerged with a sharp new pair of duds, which happened to be a symbiotic alien life form. After his traditional blue and red suit was damaged in battle, Spider-Man adopted this new suit which enhanced his abilities. For a while things were great with his new suit until it started becoming too attached to it’s host taking increasing control over Peter Parker’s life. Courtesy of the sonic vibrations of church bells, Spidey was finally able to rid himself of the alien suit, but it only found it’s way to a new host in Eddie Brock creating one of his most dangerous foes Venom.

Clone Saga: Want to make any Spider-Man fan shake their head in anger and frustration, bring up ‘the Clone Saga’. This long and needlessly complicated storyline plagued the Webhead throughout the 90’s. A new villain named the Jackal with a penchant for cloning experiments, created a clone of the hero in the form of Ben Reilly who adopted the alter ego of the Scarlet Spider. Later it was revealed that Peter Parker was in fact the clone and that Ben Reilly was the real Spider-Man. Then Ben Reilly was actually the clone once more and Parker was back spinning webs. Eventually it was revealed that everything happening was masterminded by the Green Goblin. I truly believe that by the end of it all not even the creators on the books knew what was going on.

Turned into a Pregnant Spider Monster: Obscure supervillain the Queen decides it is time to spawn with another human who has insect-inspired abilities which naturally means she set her sights of Spidey. After trapping the hero and seemingly gives him a passionate kiss, the villain releases Spider-Man who over the course of the night turns into a spider-like monster. Not only is he now a giant spider monster but is also pregnant with the Queen’s offspring. When said offspring is born it is revealed to be the original Peter Parker, but this time with organic web shooters, because……yeah it makes no sense. According to comic lore, this whole event was constructed due to a mandate to give Spider-Man organic web shooters to resemble the movies. Left with no good ideas, this was the strange route which was chosen.

Gwen Stacy/Norman Osborn Affair: s previously mentioned, Gwen Stacy and Peter Parker were absolutely mad about each other in life. That is why the creative team of J. Michael Straczynski and Mike Deodato decided to completely ruin our memories of better times with their controversial “Sins Past” story arc. They revealed that years ago, Osborn seduced the young woman and she became pregnant from the affair. This retcon made it so that the infamous murder of Stacy was done to cover up their sins. The two children produced from this were raised by Norman Osborne in secret, given enhanced physical abilities and brainwashed to believe Spider-Man murdered their mother and when the time was right they needed to avenge her. This whole story dripped of an ick-factor and enraged fans for desecrating the memory of such a beloved character.. For our favorite Webslinger, this entire ordeal was the literal adding of insult to injury. 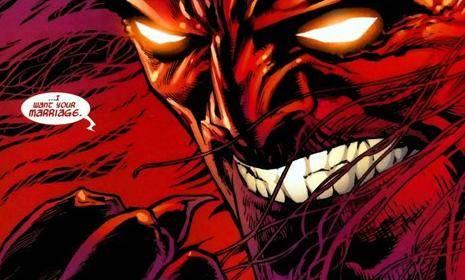 Losing his Marriage to Mephisto: Spider-Man is different from so many heroes in the sense that readers over the years have watched him grow and mature as one naturally does. Part of that process of growing up led to him tying the knot with Mary Jane Watson in 1987, the tiger finally hit the jackpot. Unfortunately during the events of the controversial Civil War storyline, Peter’s secret identity was revealed to the world and his enemies made sure to take advantage of this. Namely the Kingpin had an assassin mortally wound Aunt May. Rather than accept the fact that he was about to lose the closest thing he had to a parent, his guilt over the attack led to him trying to find a way to save her. Enter the Marvel Universe’s Satan stand-in Mephisto who offers the hero a chance to save May, all he has to do in sacrifice his marriage. After several issues of struggling with the decision, Mary Jane makes the decision for her husband and the years of happiness they shared dissolves in an instant. Needless to say the “Renew Your Vows” arc ruffled the feathers of a large portion of the fanbase, and writer J. Michael Straczynski even demanded his writing credit be removed from the book, due to how much of this tale was corporately mandated rather than his vision.

Superior Spider-Man: As one of Spidey’s greatest foes Doctor Octopus, lay dying he came up with a scheme to not only cheat death but score a definitive victory over Spidey as well. Doc Ock switched bodies with his enemy, forcing Peter Parker to die as the villain while as he got to take over as Spider-Man. Despite whatever his intentions may have been, Doc Ock found himself being influenced by Parker who pushed him into being a hero. For over a year Superior Spider-Man was the flagship book of the Spider-Man franchise starring a villain in the lead.