The Scene: Isolated on a dark stormy night, square white bread couple Brad and Janet (an assh*le and a slut if many live screening audiences are to be believed) follow a time honored movie tradition of going to a large spooky mansion and assuming the people there will give them shelter. This proves to be an unwise decision on their part as the strange inhabitants, Riff Raff and Magenta inform them that this is an important night for their master, Dr. Frank-N-Furter. The two peculiar staff members of the house escort them through the standard spooky house setting as the killer guitar kicks up and he 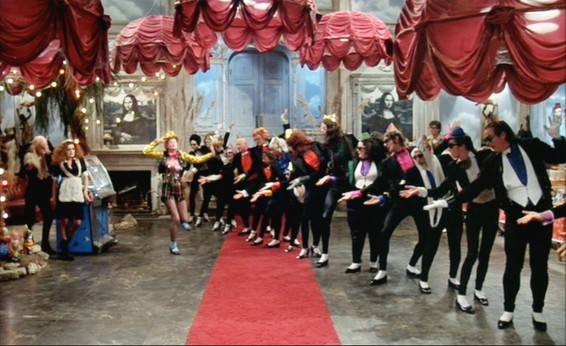 launches into a very catchy song. A shocked Brad and Janet soon find themselves in a large garish room full of revelers all happily engaged in an energetic musical number and doing “the Time Warp”…..Again! Luckily for those who are unfamiliar with this infectious tune, the camera keeps cutting to the Criminologist in his study, who explains the steps to those watching. You jump to the left, then skip to the right, following that up by bringing your knees in tight. Then you bring it all home with pelvic thrusts to really drive you insane. Eventually this scene bursting with energy and dancing comes to an end as everyone stops and collapses to the ground. An oblivious Brad and Janet try to back out, only to find themselves face-to-face with the Sweet Transvestite from Transexual Transylvania himself Dr. Frank-N-Furter.

The Deconstruction: Most people when asked about their favorite song from this cult classic, more often than not ‘The Time Warp’ is the one they choose. Not only does this song solidify what kind of movie they have gotten themselves into, but it’s damned catchy and fun to boot. Strangely, despite being such a fan favorite ‘The Time Warp’ was originally written into the original play by playwright/Riff Raff actor Richard O’Brien to fill out time. Given that Nell Campbell the actress behind the shrill-voiced Little Nell, was discovered by O’Brien tap dancing in the streets of London, he thought this musical number would give her the perfect showcase for this talent. Because O’Brien and director Jim Sharman were going for a tone they considered Wizard of Oz-esque but darker, they were able employ a trick unavailable during the stage run of Rocky Horror and speed up the voices of the background vocals to sound more “Munchkin-like”. The actors and dancers during this scene greatly benefited from the work of make-up artist Pierre La Roche who fittingly had worked as the personal stylist for both David Bowie and Mick Jagger. La Roche brought the perfect look to each of the denizens in Frank-N-Furter’s castle with a style that screamed glam rock with a heavy influence of classic horror.

Best Bit: With this Classic Scene I am making an unconventional choice for the Best Bit. Rocky Horror largely owes it’s legendary cult status to those who attend the (in)famously raucous screenings of the film. If you live in a major city, it is a safe bet that a theater in your area hosts a regular screening of this fan favorite. There is nothing quite like seeing the audience react when this famous scene hits the screen at the movie finally reveals it’s true campy nature to all. The aisles will become filled with people singing-along, dancing around, yelling things at the screen and throwing different objects. There is truly nothing quite like it and it must be experienced at least once in one’s life.