Classic Scene: ‘Singin’ in the Rain’

“Singin’ in the Rain”

The Scene: Feeling particularly elated, Don Lockwood (Gene Kelly) strolls down the street after a good evening with Kathy (Debbie Reynolds) who he is quickly falling for. A healthy rain begins to fall, but this does nothing to dampen his mood. Instead Lockwood 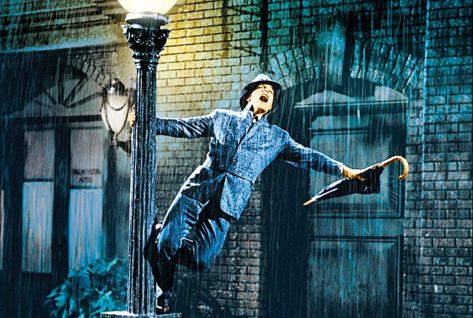 is inspired to fold up his umbrella and while getting soaked sing a catchy tune. This particular catchy tune would become one of the greatest musical numbers in the history of film, “Singin in the Rain”. Despite the downpour he prances down the streets crooning his happy refrain  in a way which will no doubt put a smile on viewer’s faces.

Deconstruction: This now-classic number fell squarely on Gene Kelly, one of the most multi-faceted entertainers in cinema history to carry…..and he was terribly sick. So sick he should have been on bed rest rather than performing. That being said it has become Hollywood legend how much of a tyrant Kelly was behind the scenes of this film. Co-stars, Debbie Reynolds and Donald O’Connor were driven to severe injuries and even hospitalization to appease his perfectionist ways. With Gene Kelly demanding that much from those around him, it only made sense that he would demand that work ethic from himself. So the backlot was draped in a tarp for a day-to-night shoot and movie magic was made. The song itself was written by the producer of Singin’ in the Rain, Arthur Freed a former songwriter, who oversaw the musicals for MGM. With this film he did as he did with many of his projects and brought in his old songs and built a story around them. Of course a song with such a title needed to be sung in the rain, and since the standard water did not show up as needed on camera, so milk was mixed in to truly make it pop onscreen.

Best Bit: The rising camera shot as Gene Kelly hits the moment singing about the smile on his face. With his arms outstretched and grin from ear to ear combined with the rising shot truly brings enthusiasm to the scene.