Background:  When it comes to two characters that mirror each other in a lot of ways you need to look no further than Green Arrow and Hawkeye.  Both are bow and arrow wielding assassins from the DC and Marvel universes and both are constantly compared.  I’m going to break them down a bit further in this column and try to come up with a consensus as to who is the better character.

Hawkeye’s story begins with him as Clint Barton, an abandoned child who was orphaned after his parents died in a car accident.  When he got a bit older he ran away with his brother to join the circus where he was trained by Swordsman and Trickshot and was able to fine tune his archery talents.  After a dispute between them where he refused to become corrupt he wandered from city to city as “Hawkeye”, performing archery tricks for paying customers.  It was when he one day saw Iron Man rescue civilians that he decided to put his talent to good use and become a superhero.  He later met Black Widow who was working as a villain for her country and seduced Clint into taking down Iron Man.  He regretted this decision and came to his senses, opting to join The Avengers or at least prove to them that he would be a great member of the team.  He broke into The Avengers mansion and convinced Jarvis to help him show the team what he could do, and with vouching from Iron Man he became an official member of The Avengers.

Green Arrow’s back story is much different as he comes from a wealthy family.  Oliver Queen grew up idolizing Robin Hood and was a natural archer, practicing on animals but always hesitant to finally kill them.  It was this hesitation that led to the death of his parents, as they were mauled by lions in a safari accident as Oliver looked on, too frightened to shoot.  Once he inherited the family fortune he became a Tony Stark form of billionaire playboy which led to a drunken escapade where he fell off of his yacht and washed ashore on a deserted island.  Armed with nothing but a bow he grabbed to keep him afloat he learned to reinvent himself and hone his survival/archery skills, ultimately going through his character transformation that leads him to become the Green Arrow we know today.  He later discovered drug smugglers on the island and took them out one by one, foiling their operation and finding his destiny in the process.  It was from that day forward that he vowed to fight crime and use his abilities for good rather than evil.

Both origin stories are fantastic but there’s something about the isolation of finding yourself and doing a complete 180 that draws me into Oliver Queen.

Skills:  Green Arrow is a master archer and the finest in his universe, claiming to fire 29 arrows per minute.  He’s also a master martial artist with skills in Judo, kickboxing and karate as well as having advanced training with a sword.  He’s an incredibly strong individual that often engages in hand to hand combat when he’s in close proximity to his enemies.

Hawkeye is also a master archer and the finest in his universe as well.  His incredible reflexes and hand-eye coordination lead him to make some of the most difficult shots the world has ever seen.  He has extensive training in acrobatics, hand to hand combat, throwing knives, darts, bolas, and boomerangs.  Clint is practically deadly in close quarters thanks to extensive training with none other than Captain America himself.  He’s also an underrated combat strategist and leader, as well as an experienced weapon designer and advanced pilot.

Both have similar skill sets and are the best marksman in their universe but Hawkeye has advanced hand to hand combat that gives him the edge over Ollie.

Affiliations:  Hawkeye is a mainstay in The Avengers and one of their most pivotal members.  According to the Marvel database he has a long list of Affiliations which include “formerly founding member of Avengers West Coast and first chairman, S.H.I.E.L.D., Carson Carnival of Traveling Wonders, Tiboldt Circus (a.k.a. Circus of Crime)” (Marvel.com).

Green Arrow is a recurring member of the Justice League and has team affiliations to Queen Industries and The Outsiders.  He’s married to the ass-kicking Black Canary and has close ties with Hal Jordan and Barry Allen in The Justice League (though Hawkeye has gotten very close to Captain America).

While both have close ties to their respective comic team-ups it’s Hawkeye who just edges out Ollie here due to his abundance of affiliated groups as well as his longstanding relationship with The Avengers. 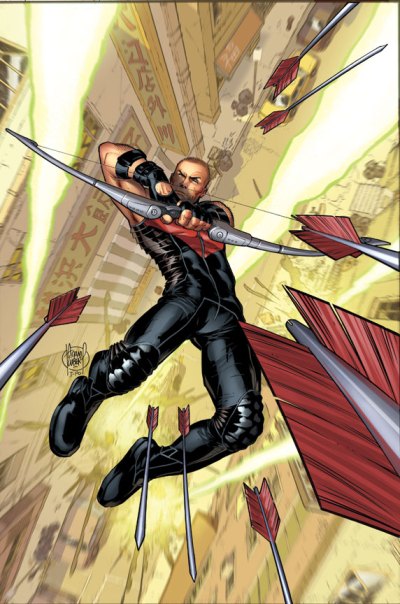 Apparel/Weapons:  Hawkeye’s trademark purple uniform has stayed the same over time with a

few tweaks and a complete overhaul in the Ultimate universe.  That saw a modern take on his uniform and the replacement of his mask with sleek looking glasses.  He uses a bow with trick arrows that include explosives, flares, sonic blasts, buzzsaws, grappling hooks, tear gas, smoke bombs, nets and standard issue deadly ones.  He oftentimes will use the collapsible bow as a hand to hand weapon as well as throwing darts.

Green Arrow is best known for his green and black “Robin Hood” inspired outfit that he dons while fighting crime.  It’s often accompanied by a hood he wears in battles and a sleek looking chest piece.  The DC 52 reboot has him alternating between sunglasses and a mask but still using his hood and green colors.  He also uses a bow and an incredibly diverse amount of custom made trick arrows to fire at enemies.  They include the standard ones, explosives, acid, bleach, nets, stun grenade, smoke, tear gas, the Greek Fire arrow and arguably his most infamous, The Boxing glove arrow.  That arrow had a lifesize boxing glove attached to the end of it and was widely used by the Arrow throughout his comics run.

When it comes to personal taste I like Hawkeye’s Ultimate look the best but nobody can deny the bad-ass image of Green Arrow donning the hood and bow.  Though both have similar weaponry it’s Green Arrow’s custom made ammunition that are the most creative, so he just edges out Hawkeye in this one. 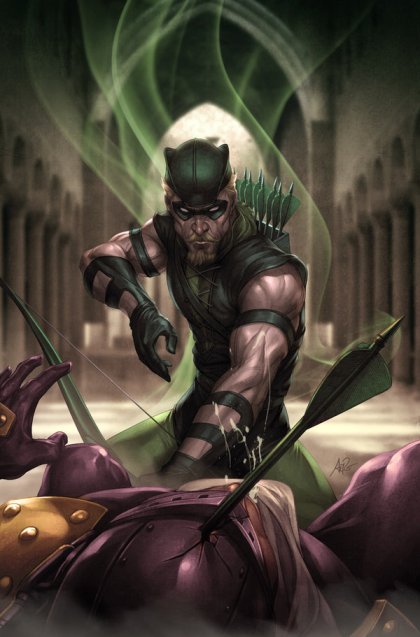 Social Relevance:  Hawkeye has seen an enormous run through Avengers comics, his standalone comic and recently a pairing with Captain America. He’s one of the main characters in The Avengers: Earth’s Mightiest Heroes, was seen in the Iron Man animated series and recently saw a burst in popularity with Marvel’s The Avengers.  Jeremy Renner brought his stoic personality to the role of Clint Barton and showed off some of his bad-ass techniques on the big screen.  Now he has his own line of merchandise including toys, action figures, t-shirts and a NERF bow.  It’s yet to be seen if Hawkeye will get his own spinoff but insiders are linking him to the Black Widow prequel and of course the inevitable Avengers sequel.  There’s just something about a character wielding a bow with breathtaking precision that resonates giddy excitement inside of fans.  Clint is an orphaned runaway that sometimes dabbles in between the lines of good and evil and it’s his quippy ways and resounding attitude that strike a chord with most fans.

Green Arrow is one of DC’s trademark heroes and has had a more successful run in comics than Clint, especially through his solo adventures.  His new DC 52 reboot has him appearing in Justice League as well as on his own with brand new imagery and a sleek, original design.  He was seen on TV in Justice League Unlimited (albeit briefly) as well as Young Justice and a recurring spot on Batman: The Brave and the Bold.  This fall he’s gearing up for his own live-action show on the WB starring Stephen Amell as the titular hero.  Oliver Queen also appeared in Smallville for a successful 72 episode run and was played by Justin Hartley.

If you ask the casual fan about each of these heroes they’d most likely know Hawkeye better due to his recent burst in popularity on the big screen; but if you ask comic fans they’d be able to recite each with excruciating detail.  Because of Hawkeye’s recent success in The Avengers, and for that sole reason alone, he wins this category at the moment.

Wow.  I knew this matchup was going to be close but it was even tighter than I could’ve possibly imagined.  A lot of these categories could go either way and at the end of the day it comes down to your perceptions about these heroes and your opinion.  Hawkeye wins for me but if you give this matchup to 10 people I’d honestly think you’d get an even 5 and 5 split.  Who do you like best?

36 thoughts on “DC vs. MARVEL: Green Arrow vs Hawkeye”