10. She’s half Jewish. They only mentioned it a few times, but it’s a nice shout out to us     Jewish readers.

9. She’s no nonsense, just like Batman. I like how the Bat-family has Robin and Batgirl to add a bit of cheer but that’s just not Kate. Kate Kane is all work and just a little bit of play, just like Batman himself. While she may be hard-as-nails vigilante, she never loses her femininity, a factor us female readers can appreciate.

8. She’s a rich girl but doesn’t act like one. I always forget that she’s supposed to be an heiress. Unlike Batman who takes time to keep up his appearances or Tony Stark who relishes his rich man attitude, we rarely ever see Kate in the upper class society environment. I wouldn’t mind a little bit more, so long as it continues to not define who Batwoman is.

7. She’s ex-military like her father. It’s nice to show some love for our wonderful soldiers, especially our female ones, and most especially our lesbian ones. And I love how the authors weren’t afraid to confront Don’t Ask, Don’t Tell right on. Kate was booted from the military after they found out she was gay but is still proud of her past service.

6. Her costume is badass. She wears a red and black suit that is stab resistant and can reflect bullets. Her weaponry is extensive (due to her and her father’s military connections) and she even gets to drive a Bat-cycle. 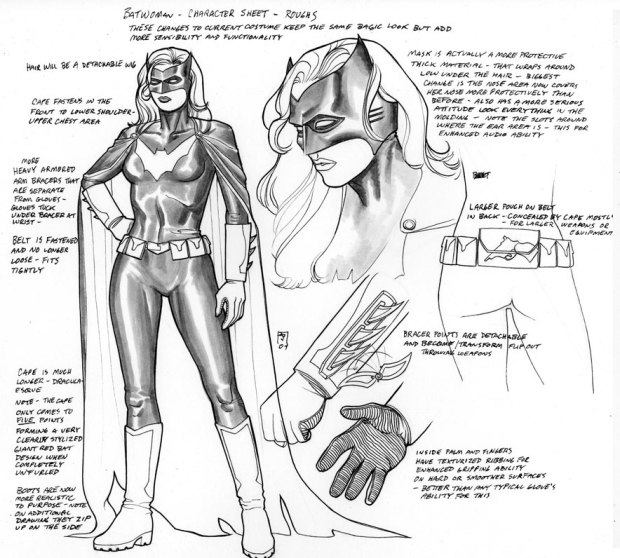 5. She actually wears a wig. Sure it’s still red, but it does disguise her identity, something that always irks me about some other superheroes. She also has a mask that covers most of her face. Kate knows she has to hide her appearance in order to be a Gotham vigilante.

4. Her appearance. First off, she’s a redhead and who doesn’t love redheads? Her whole style a little bit alternative, without trying too hard. She’s got some tattoos, pale skin, and a bright red bob. I like that she is a bit different but not too much so. She’s still relatable the way a comic book character needs to be to keep their fan base.

3. The villains featured in her titles are really interesting and more than just your typical crime boss. In Batwoman: Elegy, the villain is the childish yet freaky “Alice” who turns out to be someone from Kate’s past. In the first set of Batwoman comics, Hydrology, Kate faces a child-napping villain named The Weeping Woman. Her villains offer the just the right mix of grounded and fantasy.

2. She’s an out and proud lesbian, but not a predictable one. DC created her as a strong lesbian character, but being gay doesn’t define her and her story is written with subtly that makes it obvious they care more about her character itself than the message they want to send. In the reboot, Kate has started a relationship with GCPD detective Maggie Sawyer, which may prove difficult when Maggie has run-ins with her alter ego Batwoman.

1. The artwork is beyond amazing; the colors are so vibrant and seem to melt off the page. J. H. Williams III is fantastic. He set the bar high for future pencilers Amy Reeder and Trevor McCarthy who have so far held up the high standards that fans have come to expect from Batwoman art. You can’t really get much better than the new Batwoman series when it comes to beautiful comics.

5 thoughts on “10 Reasons I Love Batwoman”