Let’s not kid ourselves here – the end result is going to be The Amazing Spider-Man is the better film. We’ve already had two of our reviewers say as much. However a shift in attitude occurred when this new franchise was announced – suddenly people hated the Raimi trilogy. “Finally,” the people were saying. “Somebody is going to do this right”. That whole ‘Untold Story’ tag line always got on my nerves because it’s a story that’s been told multiple times.

Was it done so poorly to begin with? Spider-Man and its immediate sequel were massive hits both in cinemas and on home systems, and became the benchmark that all comic books films were compared to. Sure, it was goofy but so is the source material. Spider-Man is like Superman in that he’s one of the few characters to retain the spirit of the early days of serial comics. Batman is awesome because he has changed with the times, but Spider-Man provides an alternative hero who needs to stretch the boundaries of plausibility a little. If you try to male a ‘realistic’ Spider-Man you’ll likely to wind up with Super Generic Modern Hero-Man.

So I went to see The Amazing Spider-Man with my mind clear of expectation or opinion. I completely cleared my mind of the previous films. At least I tried to…the reality is that it’s much too soon and comparing the two in my head was unavoidable, it’s still much too fresh in our memory. If Batman Begins came out a year after Batman and Robin we would’ve been grateful for something to wash away the bad taste, but the style would still be what we associate with the series. So I went with it. Here are the results.

Raimi’s take on the character (Toby Maguire), was like many of the characters in the series in that they were broad stereotypes. There was very little to separate out the Dork Peter Parker at the beginning of the movie from dozens of others in cinema. Thick glasses, anorak, mistaking a wave to someone else for a wave to him – it’s all been done before and it’s been done since. It did contrast well with the change into Spider-Man in that it gave him that everyman quality when someone so familiar becomes someone special. Even then he’s a character with very little depth, swinging drastically from so-happy-it-must-be-drugged-induced to nobody-feels-my-pain-except-My Chemical Romance. The time was never taken to really develop the character beyond his need to use great power responsibly. 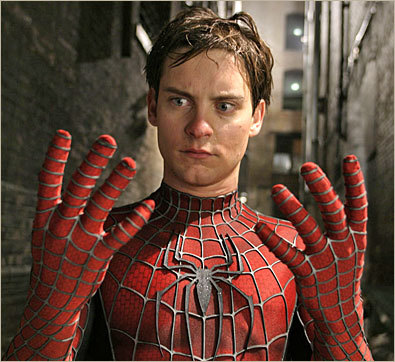 Marc Webb’s character (Andrew Garfield) is much more human. We only get the sense that he’s an outsider at school because he walks around slumped, eyes down and has trouble with the school bully, not because he has glasses and smiles like a chimp at girls. He has his own personality traits and hobbies, and even steps up to the bully when he’s picking on a smaller kid. Parker is a well-developed person who thinks for himself, makes mistakes even when trying to do the right thing. Ultimately he’s the more memorable character because there are some non-generic features to him. 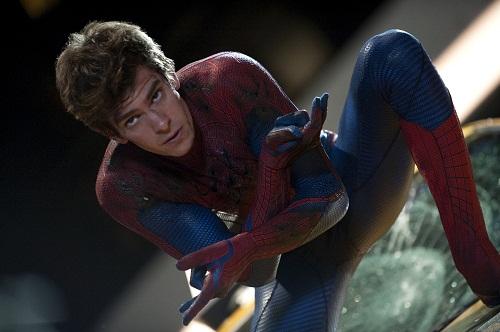 The original film had a couple of steps ahead of the new movie here because they used the most famous and longest running villain from the Spider-Man franchise: The Green Goblin. Almost all the ground they had on the new film is then totally lost when they dressed him as a Power Ranger reject. The design here was just downright awful. His suit looked awful in both design and construction – it’s hard to believe that such flimsy plastic could turn away a punch. Flying around on a surfboard thing and throwing bombs is pretty cool, but it’s impossible to take him seriously as a character or a threat. Willem DaFoe has a lot of fun hamming it up (almost more than anyone else) but as soon as the mask goes on he loses all credibility.

Jumping ahead to the new incarnation we have the extremely generic Lizard. Basically he’s a scientist who mutates into a giant (wait for it) lizard while also going mad and trying to kill everyone. He’s a poor choice for a cinematic villain who ultimately works through developing a strong character. Rhys Ifans brings a lot of heart to the role, giving Curt Connors a realistic motivation that functions as his weakness. Strangely enough, they wind up making some of the same mistakes Raimi made by having the villain develop a totally random split personality that he talks to. Both Green Goblin and Lizard (and even Doctor Octopus) do this and it cheapens the character. He’s the better character, but the more they push him into craziness the poorer he is for it. When he starts putting in action his big plan it’s not really clear why he’s doing it. 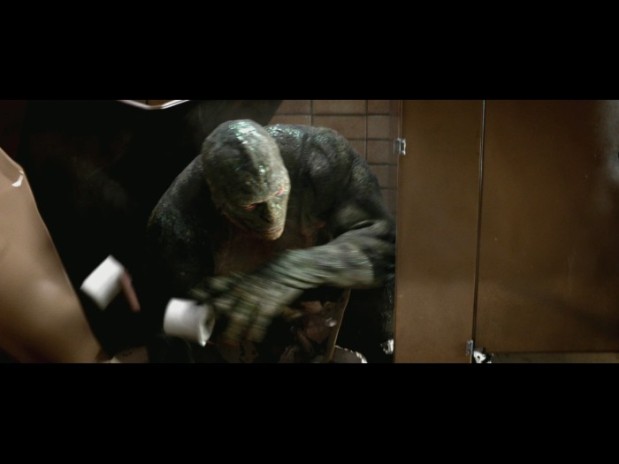 Thankfully they seem to be taking a cue from the Ultimate Spider-Man comic series in the new franchise in that the major villains all stem from the same experiments being conducted by Ozcorp. A shadowy Norman Osborne is a presence over the whole story making Goblin an obvious candidate for the sequel, and a glimpse of Doc Ock’s mechanical arms also sets up this foe.

Although Mary-Jane is the iconic Spider-Man love interest, Gwen Stacey was his first girlfriend and met a tragic end, giving them both a key part in the character’s history. I never got my boxers in a bunch over MJ getting first dibs in the first trilogy because, well, it’s not important. That kind of detail is only relevant to the Accuracy Police who will never, ever accept any slight variation from the source material. Honestly, the girl in the original trilogy might’ve been named Humbert Plumberpoodle, it wouldn’t give her any more personality beyond getting kidnapped.

MJ never featured as anything other than a token love interest. Her function was only providing Peter with a girl to gawp at and rescue from the inevitable kidnapping that occurs every single time. From film to film she’s either being successful or failing, yet her behaviour and dialogue is interchangeable. Kirsten Dunst is a talented performer but with this material she only uses a confused grimace or a copy/pasted smile (granted that’s twice as many expressions as Kristen Stewart boom tish). This simplicity is fine in a blockbuster film, but over the course of three films it begins to get dull.

Emma Stone as Gwen Stacey, on the other hand, is every thing a blockbuster love interest could and should be. Just like Peter and Connors she’s a really well rounded character. Unlike many characters in this role she doesn’t fall for the hero because he’s grown muscles and stopped wearing glasses, but it’s an affection that begins with seeing him stand up to a bully when he picks on a younger kid and it develops as they spend more time together. It’s awkward and it’s sweet and like most of the relationships in this film it is a strong point of the plot. When faced with danger at the end she doesn’t get kidnapped and scream about it, but takes an active role in helping. Peter trusts her with this because he knows that she’s capable of helping and when she does run into trouble she handles it. The final scenes, when they have to confront what they’ve faced, she really steps out of the token love interest mould to prove that she is a unique character. 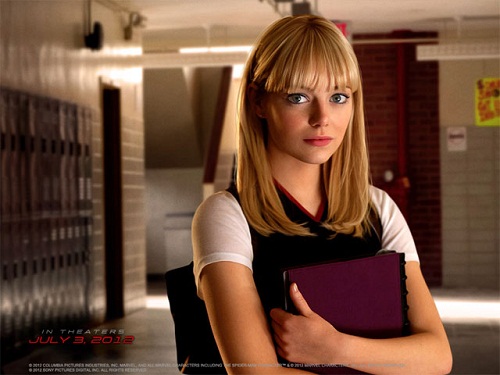 If there’s one area where the new film stands out from the first one, it’s in the casting of Uncle Ben and Aunt May. In Raimi’s films the roles of Uncle Ben and Aunt May were only included out of obligation to the comic series, and given Peter Parker moves into his own apartment halfway through the first movie they needed to come with contrived reasons to keep May involved as the series wound on (like getting kidnapped when MJ had a prior booking). They could’ve been dropped and all we would’ve missed out on was that awful dialogue about Peter thinking MJ was an angel. 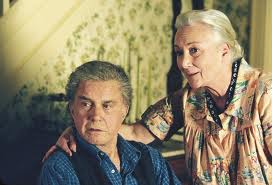 “…and when your cousin first saw Natalie Portman he asked “are you an angel?” But that kid was kind of special.”

Martin Sheen and Sally Field…well, it’s Martin Sheen and Sally Field. These two weren’t cast primarily based on their ability to look kinda like their comic book counterparts but because they can perform the roles. There’s a real warmth between them and their relationship with Peter gives us a genuine sense of what has shaped him as a person. It’s kinda like being raised by President Bartlett. Which is awesome.

If there’s one thing that sold me on the new Spider-Man movie it’s the involvement of Vic Armstrong, Hollywood’s most awesome stuntman/co-ordinator. The dude is Superman, Indiana Jones and multiple James Bonds. Even though he’s not strapping on the spandex these days he’s running the show and that means we have a person in the suit on the wires swinging through the streets whenever possible. A major criticism attached to the first trilogy is an over-reliance on CGI and while people have gotten carried away with this complaint there is a real disconnect between the viewer and the action when we know for a fact that there isn’t a real person on the screen.

Spider-Man wishes there wasn’t really someone behind him.

The Amazing Spider-Man is much, much more convincing in this area. When it is a CGI character it’s just as obvious as usual but used creatively enough not to eject us entirely out the action. When it’s very clearly a person doing the stunts it is really impressive. Andrew Garfield is often involved in the stunts and when he isn’t we have some parkor athletes to give the character the right kind of movement. When Spider-Man is scrabbling along the walls with a very arachnoid gait it’s imaginative and very cool. Still haven’t worked out how to stop his clothes hanging towards the wall he’s climbing though…

The story from Spider-Man is in a word safe. It pushes no boundaries and tries no new things. It’s a kid who gets bitten by a spider, becomes a hero and saves the day. It’s the template that gets used in pretty much every generic superhero movie (swapping out ‘spider bit’ with ‘toxic waste’, ‘gamma radiation’, etc). If you want to switch off and have goofy fun then you won’t feel as though you’ve been short-changed.

The Amazing Spider-Man conversely gives you all of that and more. We have the generic villain who is driven mad with power and his desire to fix the world, but this time there is a sympathetic side to the character that makes him as well developed as the hero. The hero himself isn’t a stereotype and grows and develops without relying on gimmicks to do so. Spider-Man as a young character who has been reinvented for the modern era. Gwen Stacey is a character first and a love interest second, existing to do more than provide the hero with someone to rescue.

In short, the new film actually has a story to tell. It dispenses with cheesy one-liners and gimmicky villains and builds strong characters whose stories hinge on their relationships with the other characters. The added realism, a genuinely tragic character arc and brilliant performances from the whole cast elevate this above the comic book movie standard set by the movie Spider-Man. If The Amazing Spider-Man is Batman Begins then Spider-Man is the Adam West starring Batman television show from the 60s with the same bright colours and cheeseball characters.