What’s it about: The X-Men comics have been pretty inconsistent lately. The inner strife that has become more and more intense doesn’t help matter. It is nice to see the family aspect of the X-Men back in the spotlight. In this issue, the long hyped wedding between Canadian speedster, Northstar, and his boyfriend finally happens creating all kinds of controversy, but the X-Men continue being the parable for anti-discrimination.

What’s it about: The second act of Marvel’s big 2012 event starts here. So far, Avengers vs X-Men has been kind of dull, but this issue Jonathan Hickman joins up, who has been slowly becoming one of my favorite writers. His creator-owned stuff is some of the most original (albeit sometimes frustratingly complex), but his work on the LXG-esque SHIELD series for Marvel is what really gets my attention. Here’s hoping he can inject some excitement into the title when Scarlet Witch joins the fight.

What’s it about: This issue is being advertised as a jumping on point. I can honestly say the series has been on of Castle’s best so if you haven’t started yet, apparently this issue is a good time too. Castle here is much more quiet and pensive. He has a steely resolve instead of an angered grimace. The most interesting is the relationship with a woman who is following in his footsteps, Rachel Cole. She is one of the best new characters Marvel has come up with in a long time. 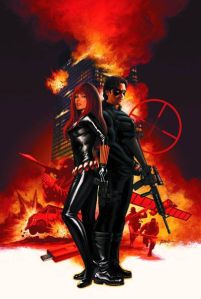 What’s it about: The continuing adventures of Bucky, now known as Winter Soldier. After his apparent death during the Fear Itself event, he goes back into covert work tracking down the super assassins he helped train when brain-washed by the Soviets. This issue has him tracking down the last of the 3 who escaped sometime ago and deduced who Bucky really is.

What’s it about: The penultimate chapter for the newest arc in one of the most gorgeously illustrated books on the market. Batwoman vs Killer Croc in his first appearance since the reboot I think! And the big bad that Batwoman has been chasing this whole time is revealed. 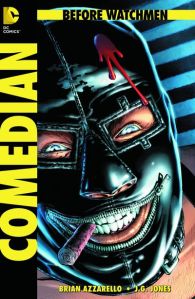 What’s it about: The prequel to Watchmen’s most perverted characters, The Comedian. Only time will tell if the Watchmen prequels actually prove to be a worthy successor, but for the moment, they have some real talent behind them. Brian Azzarello just so happens to be writing one of DC’s best books out there, Wonder Woman.

What’s it about: Fables is one of those books I always kick myself for not jumping onto when it first started. So do yourself a favor and jump on this book. It is an incredibly creative way to look at fairy tales. In this issue they visit Toyland and seek out The Fisher King, that is if they can survive the Discardia, tattered and broken toys.

What’s it about: Wonder Woman is easily one of DC’s best books since the reboot if not THE best. There is a lot of controversy surrounding this new series, but it simply sounds like fans not liking the new tragic angle of Diana’s origin and past. Last issue,  Diana was shot by a bullet that her bracelets couldn’t deflect and dragged to hell to be Hades wife. It’s up to her half-brother, Lennox, to save her.

What’s it about: Saga is one of the best new books of 2012 and possibly one of the best being published at all. Brian K. Vaughn creates an indelible world where a pair of alien versions of Romero and Juliet are trying to evade a war between their respective world. In the newest issue, Vaughn introduces us to a new planet, Sextellion, where your darkest and wildest fantasies come true. Definitely for mature readers only.