Plot: A pair of young lovers runs away together forcing a small town to put together a search party.

Wes Anderson movies have an unmistakable look. The color choices are much more vibrant than real life. They seem like they sprung write out of an illustrated children’s book. The settings have an almost sitcom like feel where all the rooms are really attached allowing for these really fantastic uninterrupted shots moving room to room. Even out in the open, there isn’t a whole lot of scope. We are usually seeing the events from one continuous angle. In almost any other movie this would be a bad thing, but for some reason it works for Anderson. Anderson’s plots are also meticulously planned out, it is a wonder they can carry on with any kind of sincerity. I think it has to do with Anderson’s deadpan humor. He is such a matter-of-fact sense of humor that any attempts to glam up the sets and cinematography would only distract from the brilliant writing, which only needs the words and the performances to hit the necessary notes.

Moonrise Kingdom follows one of the misadventures of Sam, an orphaned boy scout. Sam is well known for his ability to get into trouble. On this particular adventure, he quits his Boy Scout troop and runs away with his girlfriend, Suzy. Suzy is the daughter of local lawyers who has a problem controlling her temper. Despite the fact that the 2 of them have done a really great job alienating most of their peers and some of the adults, it seems like all of their issues are gone when they are with each other. The two young actors, Jared Gillman and Kara Hayward, perform surprisingly well and have perfect chemistry. They are able to tune in to Anderson’s certain brand of comedy.

That certain brand of comedy has in the past been paired with something incredibly depressing and tragic. Whether it is an irresponsible father figure trying to fix the bridges he burned a long time ago forever changing his children or 3 brothers trying to reconnect after the death of their father, Anderson has always been more interested in the awkwardness that follows tragedy, or more specifically the moments of guilt and apology that follows tragedy. This is where Moonrise Kingdom stands apart. The plot is characteristically hopeful taking a very optimistic look at first love and the desire for a home and community that actually cares. It is also the area in which it falters. Anderson’s trademark slow pacing and penchant for staying with visuals and scenes longer than necessary just does not blend well with his new positive point of view. It at times feels like it is too slow.

The rest of the cast is rounded out by a who’s who of underrated comedic performaners, plus Bill Murray who is a comedy juggernaut. Frances McDormand and Murray play the lawyer parents of Suzy. Their marriage is slowly and quietly crumbling apart. Their anger over this is muted by their professionalism, even calling each other counselor. This pent up anger boils over when Suzy goes missing. Edward Norton plays the head of the Boy Scout troop that Sam runs away from. Norton has an undying loyalty to the troop and feels more like an actual member rather than their adult guidance. At the head of the whole cast is Bruce Willis. His deadpan humor and sly witticism has turned a number of mundane action movies into something much more entertaining. He is usually more sarcastic, but he makes for a natural fit with Anderson’s story.  I hope that Anderson, who is known for working with the same actors over and over, will work with Bruce Willis again.

The opening credits are set to a recording of The Young Person’s Guide To The Orchestra, where a young boy explains how a big symphony orchestra is put together. He introduces a song that is played as a whole and then as its different variations, or in other words the same song as it is played by the different families of an orchestra. We see how each of them plays their role in the bigger picture so that when the recording returns to the whole theme we can appreciate it that much more. Wes Anderson is definitely hinting at a theme that runs throughout the movie. It goes about showing how the individual groups have their roles to play within this community, and how when one of those groups tries to exit the community, they are determined to not just bring them back but keep them their. This becomes clear when Sam’s permanent removal from this community becomes a real possibility.

Moonrise Kingdom is a story of young love and family ties, and how these things can make us do the craziest things. 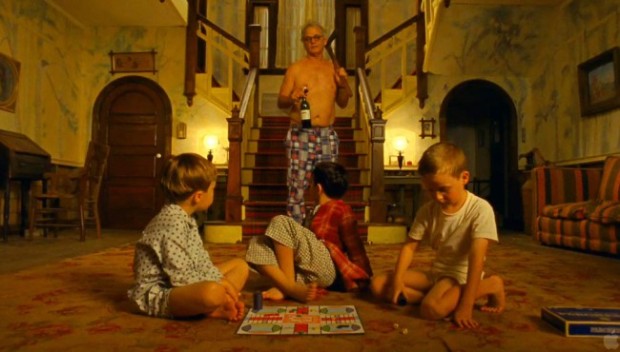