The man who passes the sentence should swing the sword.

When Game Of Thrones begins we’re immediately thrusted upon three man, clad head-to-to in black, riding horses out of a gigantic ice cliff and into an equally cold-looking forest. There one of the three finds the remains of a massacre, women, children, men, all butchered and laid out in the snow but when he goes to show the other two this slaughter the bodies have disappeared, gone without a trace. While looking for the bodies two of the men are killed by strange, white skinned, blue eyed zombie creatures and the third is left to tell people what he saw.

And this is the first seven minutes.

Yes Game Of Thrones, that brilliant, complex, violent and engaging show that captured out attention last year and stuck with us ever since. From the cold winds of The North to the vile heat of King’s Landing this show is something special and it all started here.

The pilot does a great job of introducing us to the world and most of the major players, Sean Bean returns to fantasy as Eddard ‘Ned’ Stark; Lord of Winterfell, a large kingdom in the North that’s mostly hills and forests, permanently cold. Ned is quickly revelled to be a tough but loving man, he cares deeply about his family and while he does things that seem extreme – such as showing his ten year old son the execution of an Oath-breaker – he does it because he knows it’s the right thing to do, to let his son know from an early age what being a Lord means. 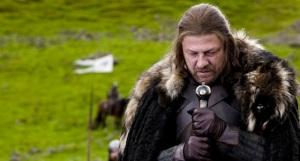 We’re also introduced to the Stark family, wife Catelyn who loves Ned very much and doesn’t want him to leave, his eldest son Robb, a third parent to some of his younger siblings. Sansa, the eldest daughter who dreams of knights in shining armour and handsome princes. The younger daughter Arya (one of my favourite characters) who’s the exact opposite of Sansa, she doesn’t want to be a lady, she wants to run and fight with the boys, the first time we see her she’s an expert archer despite never having been trained. There’s also Bran, the ten year old, he’s an adventurer, climbing all around the castle, never staying still for long, Jon Snow, Ned’s bastard son who wants to join a group called the Night’s Watch, a band of criminals and/or volunteers that keep the kingdoms safe from Wild people and those blue eyes zombies and finally Rickon who does nothing because he’s the baby of the family. 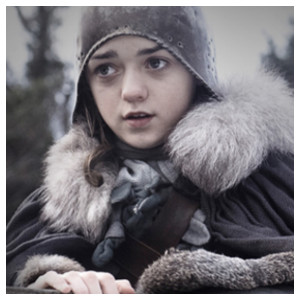 We also meet Robert Baratheon, the current king, loyal friend and war buddy on Ned’s, he was suppose to be married to Ned’s sister Lyanna but she was murdered before they could wed and so he married another but he’s never gotten over her. Robert’s wife Cersei Lannister, she’s quite bitter and passive aggressive but giving Robert’s tendencies to whores and other women it’s no surprise. Their son Joffery already giving off an air of douchebaggery, you just want to punch him in his smug face and he doesn’t even open his mouth. There’s also the Queen’s two brothers, her twin Jaime, a great and handsome knight that shares to same smugness as Joffery (Hint, hint) and their younger brother Tyrion The Imp. Tyrion has a great entrance to the show, he’s first seen drinking heavily while being ‘serviced’ by on the Winterfell’s whores, from there you just love him move with his quick wit and sharp tongue. 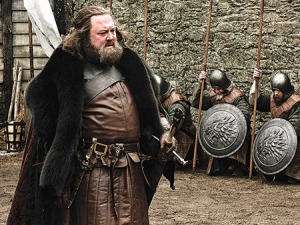 From across the sea in Pentos there’s siblings Viserys, a pompous and arrogant son-of-a-bitch that sells his sister to a violent tribe leader to buy an army and take the crown. His sister Daenerys is a quiet, meek little woman that almost allows herself to be bullied and molested by her brother, she can’t speak for herself and while she doesn’t want to marry the tribe leader she can’t find her voice to object. The tribe leader in question is Horse-Lord Khal Drogo, a hulking bohemoth of a man that has never once lost a fight in his life. 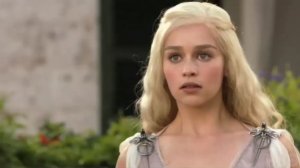 All these characters are well-acted and your first impressions of them are what you’re suppose to think about them for the rest of the show, you admire Ned’s honour, Arya’s tomboyish nature, you feel sorry for Daenerys, you think Joffery’s a little prick. I think so far only Sansa fairs worst, she’s quite annoying at times and feels a little spoiled, she’s like a medieval heiress.

The story is easy enough to follow, Jon Arryn, the Hand Of The King (an advisor and stand-in for the throne when the king is absent) has died and Robert asks his old friend Ned to be the new Hand. Before he has a chance to answer Catelyn’s sister Lysa, Jon’s wife, tells her sister that she believes her husband was murdered by the Lannisters. The show spends a lot of time building up a backstory, nothing is said outright but we get a lot of hints, Robert telling Ned ‘You helped me win The Iron Throne’, Viserys saying he wants his throne back or Catelyn mentioning Ned‘s father and brother and hinting that something terrible happened to them with a previous King. There’s also subtle hints to the characters and their relationships so you can build them up in your head, whether it’s Tyrion calling Jaime ‘brother’ or a more hidden moment such as Snow talking to Bran and calling Ned ‘Father’ but Catelyn ‘Your mother’, showing that they don’t share a mother. Most importantly though the show doesn’t treat you like an idiot, there are a couple moments where they reinforce something several times to make sure you know it exactly but for the most part the show trusts you to remember these characters, they’re relationships and their backstories

Van Patten, a veteran director for HBO with credits on Sopranos, The Wire and Boardwalk Empire amongst others, does a great job with this new world. He set it all up brilliantly, from the icy greys of Beyond The Wall, the cold blues of Winterfell warmed by the Stark family, the soft yellows of Pentos making it seem all the more exotic and interesting and the harsh oranges of King’s Landing, giving it that warm Kingly feel but with an underlying sense of dread. All these places are instantly distinguishable form one another making it easier to know where everyone else is at any one time. Van Patten also manages to keep the show interesting even with most of the scenes just being people talking, he captures the tension between all the characters, we know exactly when people are being nice to each other or if they’re being sarcastic. Where the directing really shines through is the ending and this is a great ending to hook you into the story, you already have this murder mystery plot but at the end of this episode you follow Bran as he climbs up the castle only to find siblings Cersei and Jaime going at it like rabbits in the hidden tower and to keep Bran silent Jaime pushes him from the window, the final shot of the episode being Bran’s flailing body rushing towards the camera, engulfing the screen in darkness. It’s sudden, it’s shocking and it hooks you in immediately.

So far there’s only one complaint to be made of the show and that the time jumps, one minute it’s one day and next it’s the next month with no indication of when the jump occurred or how far forward the time has moved. Other than that and Sansa there’s not really much to complain about.

Overall, this is a great pilot to a great show, it does exactly what’s needed, it draws you in as you get invested in these rich characters and their engaging storyline with several questions you want answered and quickly. Even if you don’t watch the rest of the show this is worth checking out.

Best scene – While Tyrion’s great entrance is, well great, I have to give this one to the ending, just the one, two punch of royal incest followed by attempted child murder make for a brilliant ending.

← Top 5 Creepypasta
A History of Mermaids on Film →

One thought on “Television Review: Game Of Thrones 1X01 (Winter Is Coming) Revisited”