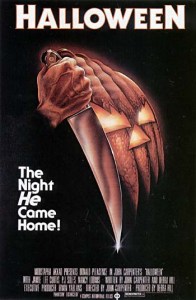 Plot: A psychotic killer breaks out of a mental asylum and returns to his hometown to stalk teenagers.

Halloween is a genre defining movie. Every slasher flick that came after would ultimately be compared to it with good reason. It is some of the sleekest direction in the history of horror cinema. John Carpenter works so well with his budgetary and technological constraints like when Spielberg used the barrels instead of the broken shark robot in Jaws. For example, the first scene is shown completely from the point of view of the killer, Michael Myers, through the undersized eye holes in a cheap Halloween mask. It blocks our view just enough to obscure the fact that the knife isn’t really being stabbed in to someone but making the whole thing almost as scary as if it actually were. The shocking ending to this scene has a one-time use shock value that becomes an eternally cool and ballsy move on repeat viewings.

15 years later, Michael Myers breaks out of his mental institution and returns to his hometown. He starts talking the teenaged girls from the area including Laurie Strode (Jamei Lee Curtis). These characters are instantly reliable teenage archetypes skirting the more charming side of what could have been bitchy characters. Jamie Lee Curtis most of all brings a sisterly charm. It is better for the movie not to sexualize her too much. Rather than feeling attraction, you feel an overwhelming need to protect her. Caring for the protagonist is an attribute long forgotten in the slasher subgenre today. Among the teenagers is Myers’ psychiatrist, Dr. Loomis, played by Donald Pleasance. Loomis fits a very specific archetype. He is the old doomsayer that no one really listens to. Pleasance is no lightweight. By the time he did Halloween, he was already nominated for four Tony awards and appeared in such classic pieces of cinema including The Great Escape, Fantastic Voyage, and THX 1138. He adds a sense of legitimacy and gravity to a genre that is never taken as serious as it should be.

Michael Myers is watching you

It is really important for these characters to be likable because there is so much invested in keeping Michael Myers as mysterious as possible. He never speaks, but he has a Darth Vader wheeze. For both Myers and Vader, the wheeze is somehow so expressive, probably because they are both hidden by their masks. His blank slate mask exponentially increases his creepiness making him seem like something unstoppable. It evokes our fear of the unknown, and it begs us to guess what is behind the mask.

Carpenter also plays not just writer and director but also composer. He creates an indelible theme that strikes fear into the hearts of anyone who listens to it. A simple high pitched piano implies immediacy or coming doom. A racing theme the flutters your heart and instinctively gets your flight response ready. Strings thunder among the piano increasing the level of doom. 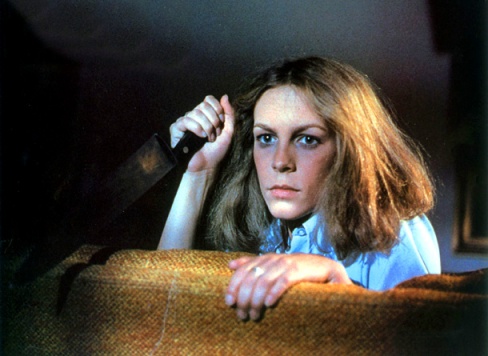 Halloween brings a new level of terror to the kid-friendly holiday. It will remain an immortal piece of cinema and the ultimate refute to anyone who questions John Carpenter’s entry to the annals of great filmmakers.