John Carpenter in Review: Memoirs of an Invisible Man (1992) 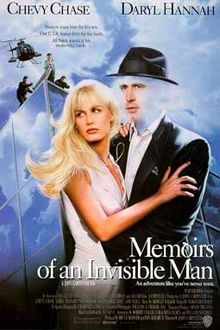 Plot: Nick is a yuppie who is turned invisible after a freak accident. He tries to earn the love of a beautiful woman while the CIA tries to recruit him to be a field agent.

This, like Starman, is another strange entry in John Carpenter’s filmography. It seems like it was put together and marketed as an off-beat, zany comedy, and while there is plenty of that to go around, Carpenter stays closer to his guns than when he changed a lot for Starman.

The movie starts off fairly clever.  We are shown an empty office chair with lead actor, Chevy Chase, narrating his life story specifically about how he turned invisible and what happened afterward. The invisible effects are fairly convincing. The first few minutes are committed to showing them off after all. Things like seeing him chewing gum or drinking liquor are impressive. It was equal parts fun and sad to watch Chevy deal with this impossible scenario. What I thought was interesting was I don’t think I have seen in other invisible man movie where the actual invisible character was having trouble because he couldn’t see himself. These types of movies always just assume that they can see themselves or that they don’t need to see themselves to function. 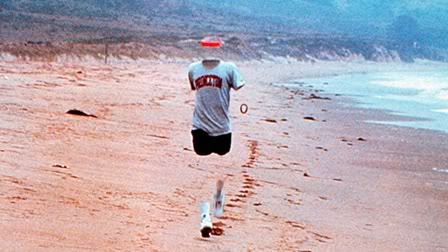 It soon degrades into something very creepy. A good portion of the beginning of the movie involves Chevy hiding out at his friend’s beach house. Eventually, those friends come for a visit and bring a houseguest, a very attractive blonde played by Daryl Hannah. In one scene he watches his love interest make out with another guy in her bedroom and then sticks around for her to undress.

I was pretty impressed with Chevy Chase in the lead role. For the most part he plays it straight. As opposed to his usual clumsy oafish characters, the awkward humor here comes from the situation rather than his personality. In fact, he comes off very charming, and his reactions seem plausible if the implausible were to actually happen. He perfectly balances his likability against the overall comic tragedy of the story. Sam Neill is a fantastic counter as a cheesy super-agent villain.

What happens when an invisible man smokes?

The romantic subplot, which basically becomes the main plot, really puts the brakes on the pacing and tone of the movie. It basically becomes a romantic comedy with a few Carpenter trademarks thrown in for good measure. The whole thing is also unnecessarily narrated by Chevy Chase trying to pull off some noir voice tone like he is some hard-boiled detective.

It is a deeply flawed film, but still a decently entertaining film. If nothing else, the visual effects are quite excellent.

← John Carpenter in Review: They Live (1988)
The 10 Biggest Facebook Annoyances →