The Dalton era of 007 was hard-edged, realistic and dark – but didn’t quite gel with viewers. Time for a new face on the franchise…

The Mission: An attack on a Russian satellite base leaves one survivor and the controls of an orbital EMP weapon in the hands of a terrorist arms dealer known as Janus. Bond is dispatched to uncover Janus and put a stop to whatever they have planned.

Locales: The Soviet Union during the prologue flash back. Modern day Russia, Cuba, France and Monaco make up the rest of the settings.

Gadgets: A size 34 mens belt (leather) that features a grappling hook in the buckle, a ball point pen containing a class 3 grenade, an Omega watch featuring a laser cutting tool and remote detonator, digital binoculars with a satellite uplink and an electronic door hacker.

Vehicles: The Tiger helicopter that can withstand an EMP blast. Bond’s first BMW and old Aston Martin both appear, but don’t get much screen time.

Sidekicks: Bond meets CIA Agent Walt for the first time, a contact he’ll make use of more than once. Through Walt he meets Valentin Zukovsky who assists him in tracking down Janus.

The Girls: Natalia Simonova is a Russian computer programmer who survived the initial Goldeneye attack and becomes Bond’s ally after Janus attempts to murder them both. Xenia Onatopp initially begins as a love interest for Bond but it isn’t long before she shows her true colours. Not to forget Caroline, a psychologist sent to evaluate Bond.

The Enemy: The aforementioned terrorist arms dealer Janus, who is revealed to be Alec Trevelyan – formally 006 of the British Secret Service – out for revenge against those he feels wronged him. 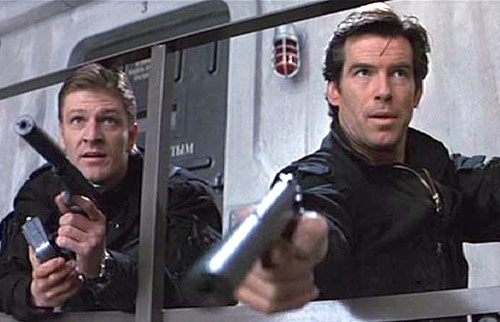 Evil Plot: After stealing the Tiger helicopter to protect his people from the Goldeneye EMP Janus intends to use the remaining satellite to attack London.

Distinguishing Features: The right side of Janus’ face is heavily scarred from being caught in an explosion.

Secret Lair: Janus rather cleverly keeps his base of operations mobile on an armoured train.

Henchmen: Among his crew is Xenia Onatopp, a psychopath who is sexually excited by violence and crushes men to death with her thighs. General Ourumov is the head of the Russian Space Program and has been a long time ally of Janus. Finally there’s Boris Grishenko, a Russian hacker.

Facts About the Movie

Politically Incorrect Behaviour: In the time of PC Bond is more respectful, even quipping about safe sex. Still…it doesn’t stop him from avoiding a professional psychological evaluation by seducing the psych.

Notable Firsts: Not only does Pierce Brosnan make his debut as the famous James Bond, but we also have Dame Judi Dench taking on the part of M and would continue in the role long after everyone else has departed. Samantha Bond also steps up as Miss Moneypenny. Bond drives his first BMW, which would become standard for a while. The first largely CGI opening sequence is used. Martin Campbell takes up the role of director, updating the series for the modern world for the first of two times.

Random Trivia: Director Martin Campbell is seen as the lead cyclist who topples over during the Aston Martin/Ferrari chase down the mountain.

The end of the Cold War is in part symbolised by Russia allowing the producers permits to film in St. Petersburg. Not quite an open invitation, the producers did have to prove that the tank’s weapon systems had been deactivated before bringing it into the country.

The 640 foot bungee jump set a new world record by stuntman Wayne Michaels. Immediately after the jump Michaels was required to go again in order to film the close up shots.

Roger Moore visited the production as a guest of his son, who was employed as the third assistant director.

‘Goldeneye’ was not named after a book or story by Ian Flemming, but the name of his house.