Cinematic and TV Universes are always fun to imagine, they can be as simple as a crossover episode, like C.S.I. and Without A Trace did once, something more subtle like the Vega brothers in Tarantino’s Reservoir Dogs and Pulp Fiction, or something entirely more elaborate like a certain avenging group.

But perhaps the most intricate and yet still understated connections to several television shows in one man, Detective John Munch played by Richard Belzer, somehow Munch has become the go-to guy when shows want to connect themselves.

John Munch started in 1993 in the HBO show Homicide: Life Of The Street and was a regular member of the cast through all seven seasons. Up until it’s cancellation, Homicide had several crossover episodes with the Law & Order series and even one cameo appearance from Chicago Hope. When Homicide finished, the L&O crossover was fully realised when Munch was transferred to S.V.U., joining the show in 1999 at it’s pilot episode and has stayed with show through all 14 seasons and counting.

So far that’s three shows that are connected through Munch. It only grows from there, not forgetting his roots, in the year 2000 the creators of Homicide had Munch return for one episode of their very short lived series The Beat (lasted six episodes out of a planned 13). The far more successful HBO show, The Wire had a cameo appearance from Munch in 2008 where he visits Kavanaugh’s Bar, a place he visited during his time on Homicide (incidentally enough, the focus of the bar scene was on the character of Gus, played by another Homicide alum, Clarke Johnson). 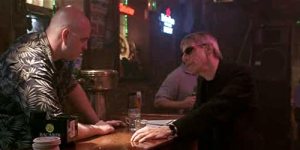 We’re at five shows now, and it’s not just police shows the Munch has been a part of, in 1997 Munch worked with Mulder and Scully on an episode of The X Files (the episode set in 1989 when he was still with Baltimore). Perhaps the oddest appearance was in 2006 when Munch appeared on an episode of Arrested Development playing a Professor. The final show which has connection to Munch is the BBC crime drama Luther which, during it’s first season in 2010, mentions John Munch by name as their American contact for the Special Victims Unit.