Plot: As the CIA scramble to cover up the assassin programs following knowledge of Jason Bourne becoming public they begin to eliminate all the operatives they have left in the field. One, Aaron Cross, escapes the attack and goes looking for a way to survive.

Review: The basic thrust of the narrative in this hastily assembled attempt to extend a brand name franchise past the departure of the lead actor and the director is that Aaron Cross wants to escape the assassination attempts the CIA are lunging at him and he needs a regular dose of a particular medication to survive. There. In one sentence I’ve done what the movie spends the first half an hour trying to set up. We switch from one conversation between people to another, and they always end with Edward Norton saying something in a dramatic voice.

He does not actually shoot anyone with these guns.

We occasionally switch out to Renner being a manly rugged wilderness guy. Why? We don’t find out for half and hour, and the answer is ‘nothing much’. When we get to the 30 minute mark everyone gets their thumb out and do something interesting, that being sending drone crafts to missile Renner in the face. Don’t get your hopes up though…85% of this ‘action’ scene is the guys in the control room talking about in a bored voice while Norton chips in with something dramatic. Renner’s contribution to this sequence in a) running b) strapping a pie tin to his leg and c) firing a single shot.

After this the real boredom set in. The majority of the movie is people talking about the same shit they’ve been talking about for the rest of the movie up until that point. We occasionally switch out to Renner doing something actiony but it’s shot sloppily and tries desperately to ape the style of a much more experienced and imaginative director. And then suddenly the movie ends with a ‘to be continued?’ practically stamped on the screen. 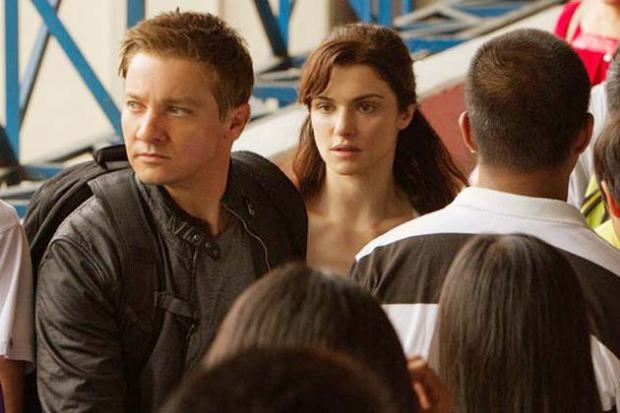 Or just standing around looking bored.

Essentially this is a misfire. Banging on about the failed projects and missions and Jason Bourne is so completely overdone and needless is confusing as to why they keep doing it. They rarely talk about anything new and they never do it in an interesting way. The actors are stuck trying to squeeze drama into dull conversation that the performances quickly slip from intense to hammy. Leaving the introduction of Aaron Cross in an action sequence until the second act is a baffling move, suggesting that they didn’t put much thought into this film.

It should’ve been very simple. We’ve already got three films of backstory, so a quick recap of why Bourne ruined their shit and that they’re going to wipe out the other agents to set the scene and then drop us into the action. The point that needs to be sold is Renner stepping into Damon’s boots (which, again, should be easy) and to do that we needed to see him in action, not going Man vs Wild on a mountain. The intense CIA scenes were a major part of the original trilogy but the director seems to have no idea what purpose they should serve.

Please point that at the four script writers.

The few good actions moments don’t come close to balancing out the dull and pointless exposition, the clunky pace and the random scene of a brainwashed scientist shooting up a lab. It should’ve been an easy film to make but they’ve just got no idea.

Boring, talking, even during action scenes.

Action is brief and uninteresting.

Lacks the finesse of Greengrass.

Did Moby take up smoking>