Martin McDonagh is one of the most exciting creators to march into Hollywood in the last decade with his brash, in your face style and hilariously clever writing qualities. He spent most of his earlier career as a playwright who consistently pushed the envelope while bringing you the unexpected from a medium that’s typically safer to work with then film, making his transition to the big screen a remarkable one. He stormed onto the scene with his Academy-Award winning short “Six Shooter” and brought a couple of players with him to his first feature film In Bruges which really just blew my mind in the best way possible. I honestly think it’s my favorite movie venture into comedy so I guess you could say my expectations were astronomically high when it came to Seven Psychopaths. Like his leap from Six Shooter to In Bruges, McDonagh brought a couple of familiar faces and the star of that movie (Colin Farrell) along for the ride… and what a ride it is.

I’ve seen a lot of people suggest that if you liked In Bruges you’ll like Seven Psychopaths and while I do think that there are situations where that notion holds true I also think that they’re very different movies that don’t necessarily go hand in hand. A lot of McDonagh’s trademarks are flowing throughout the movie such as his love for excessive amounts of blood and of course his systematically dark, thought-provoking drama that has his own little twist on the end of it, but this also stands on it’s own from In Bruges and is something else entirely. His writing has never been better and you can tell that he takes the next step with Seven Psychopaths to elevate his storytelling qualities to a much larger canvas. Where In Bruges dealt with a couple of hitmen as they’re learning life-lessons and being chased by their boss Seven Psychopaths delves deeper into human themes and a layered story that revolves around a larger set of characters interwoven within one another. The end result is a deviously creative melting pot of ideas and story juncture that explodes into your mind from one sequence to the next. The basic premise for the movie follows Marty (Farrell), an alcoholic film writer who starts his new project “Seven Psychopaths” that’s about more than your typical Hollywood shoot em’up gangster movie. However things go to shit when he gets mixed into his best friend’s (Rockwell) dog-stealing scheme that works in the simplest of ways: They steal dogs in the area and when the owner thinks they’re lost and offers a reward they return them for cash. His partner (Walken) is doing it for a much larger cause as we find out that his wife has cancer but he takes it one step too far when he steals the prized dog of a ruthless psychopath (Harrelson). Hilarity and violence ensues as Marty goes along for the ride while using the surrounding events as set-pieces for his final screenplay. 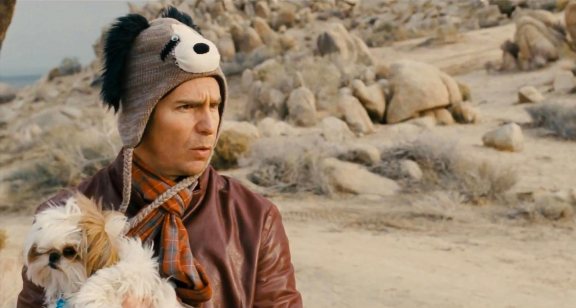 Sam Rockwell steals the movie and showcases his comedic brilliance

I mean, that right there should tell you everything you should know about the mind of Martin McDonagh but that sort of straight-forward narrative I laid out above is only a glimpse at what the movie offers to it’s viewers. While yes the dark comedy you’re expecting from the writer of In Bruges is alive and well it’s really used in this movie to preface a deeper message about sacrifice and finding yourself, which is something that the trailers couldn’t possibly convey in a 90 second span. It’s full of comradery between our main characters and there’s a good amount of heart in these guys that was an element I really wasn’t expecting. When I went into this movie I envisioned it to be a straight-forward tale along the lines of In Bruges but the deconstruction of it’s delivery is something I haven’t really seen before. We’re essentially watching the events of a movie play out as Marty is writing the same movie for his screenplay which leads to the interjections of short stories and characters that fluctuate between both narratives and become whole with one another in the end. Sound confusing? It would be in the hands of someone else but I promise you that it plays out perfectly as you’re watching the movie. It’s full of plot-twists that you don’t see coming while characters are getting knocked off when you least expect it and that’s what makes it so fucking exciting. You really have no idea where the story is going or what’s about to happen next and nobody is ever safe in the process… and that gives the movie this throbbing heartbeat that keeps you thoroughly invested from start to finish.

When it comes to some negatives I’d have to say that it’s not nearly as tight as In Bruges was and it feels almost stretched too thin during a bulk of the middle act. I’m not sure if this was due to the ambitious nature of the story or if they were just biding their time until the end but there’s a moment right in the middle of the movie where that relentless flow of a McDonagh story disappeared… though luckily it resurfaced in the final act.

As for the positives? Well, pick an aspect of the movie and I’m sure you’ll come across something good to say about it. The writing was again top-notch and I find it criminal that McDonagh wasn’t awarded a third Oscar nomination for his screenplay. This is a story that would easily crash and burn with the complexity of it’s delivery but he made it flow without qualms or confusion and for that alone I think it’s worth some praise. Rockwell and Walken are the standouts of the movie and like they do in a majority of their previous work they completely steal the spotlight whenever they’re on screen. Luckily for us we get a couple of really great scenes between the two of them and rather than being set in one tone we’re treated to a slightly dramatic moment in contrast to their comedic scenes where they bounce off one another like goddamn flubber. McDonagh’s words just sound so fitting coming out of the mouths of Walken and Rockwell, especially Rockwell who has one particular monologue set in a cemetery inspired shootout that will have you pissing laughing for days. Just like he did with the city of Bruges in his previous work McDonagh brings his setting to life and finds the best possibly scenic spots for his set-pieces, which really elevates the entire movie and adds that calming effect that counterbalances the death and violence.  Oh and Tom Waits comes along in a role that might relaunch his career in the same way Warrior did for Nolte and The Wrestler did for Rourke, he was just really great.

Just like In Bruges we get a villain who’s less by the book evil and more convincingly justified in his actions.. though a bit nuts

Just like In Bruges I had no idea what to expect going into it since the trailers failed to grasp the tone and message of the movie which might just be a borderline impossible task when I really think about. It’s not as tightly woven or consistently hilarious as In Bruges but a step down from that is still a step above most of the shit we’re thrown at on a consistent basis. I loved the short stories set on the multiple Psychopaths in Marty’s screenplay and the end reveal with a particular character’s arc was one of the better “twists” I’ve seen in movies, and it was accompanied by a pitch-perfect delivery from Walken. If you’re in the mood for something wacky that’s a little too creative and full of stylistically vibrant violence with multiple layers that can take your emotions into hundreds of different directions than I’d recommend Seven Psychopaths… and if you’re not then I’d recommend you stop watching movies.

← Tarantino in Review: ‘Inglourious Basterds’
Most Anticipated Movies of Sundance 2013 →