Review: The Best and Worst of Bioshock Infinite 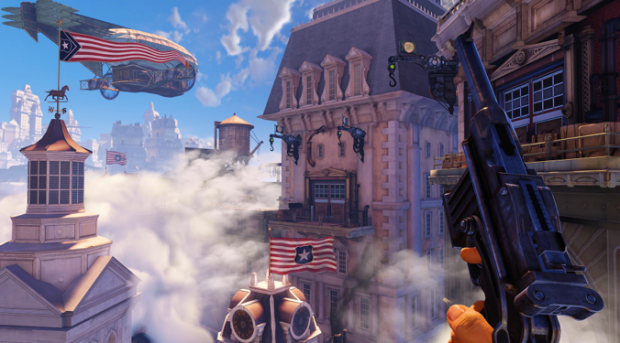 As someone who plays games for the narrative, rather than multiplayer action or some kind of challenge, the original Bioshock was something of a favourite of mine. Like System Shock before it, the game was full of twists and turns, character development and world building like no other game. So I was pretty excited for Bioshock Infinite when it was announced, my main complaint being that the name seemed to be cashing in on the success of Bioshock and Bioshock 2 (which admittedly I never got around to playing).

“Name it something else!” I hollered. “You’ve done Bioshock, and Bioshock 2; now have Skyshock or Steamshock or whatever” I ranted. I’m kind of weird like that. In my defence; it didn’t really seem like more than pandering until a certain point in the game when OMG EVERYTHING SUDDENLY MAKES SENSE.

I’m not going to spoil things here. If you want to experience the winding narrative of Bioshock Infinite then I encourage you to play it for yourself. Reading about the plot is never going to be the same as having it unfold through your actions. And unfold it does.

But we’re here for a list, and so this is it; my best and worst of Bioshock Infinite.

I can’t really talk about what makes the story of Bioshock Infinite great without giving things away. Suffice to say, just when you think you know what this game is about, it throws you a curve ball and you’re struck upside the head, dazed and disoriented, grasping at the story threads to make sense of it before another ball comes hurtling towards your already concussed noggin.

This may seem like poor storytelling before you’ve experienced it, but it just adds to the intrigue and makes you as player want to strive ever forward, searching for answers in a city where questions are the currency. Well actually Silver Eagles (a kind of fancy coin) are the currency and you’re going to find them in the weirdest places.

The story of Bioshock Infinite is one of racism, religious zealotry and one man’s quest to atone for his sins. It’s no easy tell, and it’s not without grim realities so be warned.

Booker DeWitt, player protagonist, is a simple man, a former Pinkerton and an agent sent to the floating city of Columbia with one job – bring back the girl. His clients are two strange siblings who show up frequently throughout the game. His charge is the young woman Elizabeth, dressed like a Disney princess and locked in a tower her entire life.

These along with villainous “prophet” Zachariah Comstock form the cast of the game and each one is perfectly played, superbly animated and brings a real life to the world. DeWitt and Elizabeth work together for much of the game, with the AI controlling the young woman and doing an almighty brilliant job of it. Not only will she find you ammo and salts (to power the plasmid-like vigors the player will attain during play) but she is a genuine companion. This is no escort mission as Elizabeth has no life bar, never needs protecting and offers the player story and conversation as they progress.

With seemingly hours of dialogue, I rarely heard her same the same thing twice and never during a non-combat moment. She’ll pick locks for you if you have the lockpicks and during the quieter moments she really bonds with the protagonist, and by extension the player. Unlike many AI controlled accomplices (I’m looking at you Sheva from RE5) Elizabeth is never a hinderance, and through my play I found myself really growing to like the character.

Comstock and his followers are the perfect antagonists in terrifyingly pious Columbia. This is not your normal Church community but a twisted rendition of early 1900s fundamentalism; hatred of Blacks, Asians, the Irish and anybody who isn’t white and a supporter of the one true Christian faith. In fact the game opens with a clear moral choice moment – and whether you choose to be the good guy or the bad guy effects the development of your relationship with DeWitt and Elizabeth, as well as the enemies you face.

Everyone is voiced brilliantly, even down to the snippets of conversation overheard through the game – unlike Rapture, Columbia is still a functioning city and so there are many people around, delivering thinly veiled racism to your delicate 21st Century ears.

I read something this morning, on a site I won’t name, that said the gameplay in Bioshock Infinite was terrible and that it shouldn’t be a shooter. Clearly that reviewer never played the previous games. Or Dishonored, which shares a lot of features of the Bioshock franchise – an alternate, stylised world, epic plots in a fictional city, a balance of weapons and magic.

In contrast I found the gameplay to be excellent. It can take a bit of getting used to; the aiming isn’t spot on for example but once you’ve got the hang of it, I had no problems. DeWitt reacts as he should, the enemy AI is perfectly adequate and the way boss battles are used to introduce new types of enemies and the vigors they carry is rather clever. 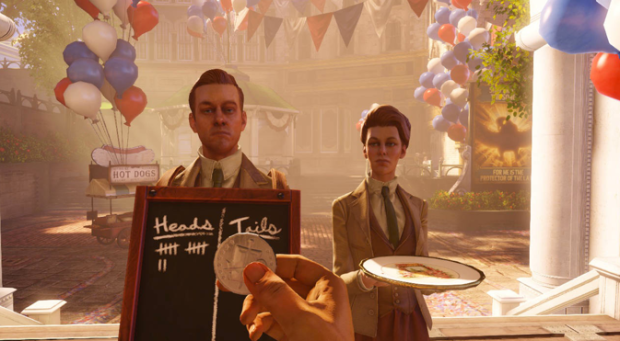 Where the game really shines is in the merging of the weapons and the vigors. As in previous titles, one hand controls your gun, and the other your magic. You can shock enemies with Shock Jockey to incapacitate them, send a barrage of feathered beasts at them with Murder of Crows, deflect enemy fire with Return to Sender or grab enemies from afar with the watery tentacle of Undertow and as you would expect the combination are numerous.

My personal favourite is grabbing distant enemies with Undertow, pulling them towards me and electrocuting them with Shock Jockey; their heads exploding if you give it enough juice.

There’s no melee weapons, just your skyhook which can be used to pummel enemies with the touch of a button, or do real damage to them if you time it right. The violence in the game has received some complaint but unlike Tomb Raider or Far Cry 3, two games that featured inexperienced nobodies thrust into terrible circumstances Booker DeWitt is an experienced fighter, a veteran of war and a former agent of the Pinkerton National Detective Agency – a corporation not unknown for using violence to solve problems.

As such the quite high levels of gore in the game never really felt out of place. The enemy throw many soldiers at you, and each of them is quite willing to kill in the service of their prophet. In addition to regular policemen, you have Firemen, Zealots, Patriots, Handy-men and Boys of Silence – all known as the Heavy Hitters – who begin as boss enemies and then appear regularly from the first encounter on. It’s kill or be killed and it serves the story well; DeWitt is a man who is atoning for terrible crimes and atrocities committed in his past – it makes sense that a man capable of such things would fall back on them as his first choice of conflict resolution.

Just. Superb. I’m not saying any more than that.

The people who live in Columbia are dumb. Admittedly their a bunch of radical racists who worship John Wilkes Booth and a man who claims to be a Prophet of the Lord but outside of that there is one major aspect of their personalities that bugged me from the first sign of action – they don’t notice a fucking thing going on around them.

Other than a couple of very scripted encounters, not a single person in Columbia ever noticed, commented on or recoiled from the ‘clearly not a police man’ wandering around their streets, homes and later a goddamn beach carrying a machine gun and a rocket launcher and whose free hand alternates between pulsing with electricity and growing feathers and raven claws.

No matter what I was doing, nobody seemed to care outside of the action scenes where the game spawned enemies to shoot back at me and it really goes a way to reduce the level of immersion in the game.

The enemy AI is great. The NPC AI, yeah not so much.

In Bioshock in was handy going to the maps of Rapture to know how to, roughly, get from point A to point B. There is no such system in Columbia. Sure there are mounted signs but they’re so stylised as the be rendered useless and there were several times when a map was not only handy, but downright necessary.

For example. Early in the game I came across a chest, and the optional objective to locate the key for it. I searched the house and found nothing. So I kept my eyes peeled and then, a little while later, found the key. Except between the chest and the key I had navigated a bit of floating terrain, much of it by skyhook, and without landmarks I had absolutely no idea how to get back to the chest. I tried for about twenty minutes but the skyhook had dropped me somewhere

I never found the chest. I also never bothered with the optional tasks again. There is a wayfinding system, press up on the d-pad and an arrow points the way but I think in a game with a complicated city like Columbia, and optional fetch quests a map is pretty fundamental.

That said; you do follow a pretty linear path so perhaps it’s not that big a deal to most players.

For all the talk of DeWitt’s debt, the one he must repay; never do we find out what that debt is. We see and experience Songbird a whole lot but we’re never told what he is, how he is, or really anything about such an important part of the story. Songbird just is, and it feels unsatisfying.

We also never find out why the vigors were created. In Bioshock the city of Rapture was all about scientific progress as it’s own ends, and the people were obsessed with modifications. Columbia, not so much; in fact they only seem to be marketed as party tricks.

I don’t know about you, but I’m not generally too happy for my party guests to summon ravenous swarms of crows to peck my friends to death, or to send shockwaves through my floor that destroy rock, let alone deep pile carpeting and porcelain tiles.

Bioshock Infinite is one of the best games I have played in a long time. It proves that violence and style can go hand in hand, that a first person shooter can have a deeply woven narrative and that character portrayals in games can be just as fulfilling and splendid as those in upper tier movies. It has a couple of points that keep it from being a perfect game but they’re so minor that once you reconcile them in your mind you don’t really miss them. Sure I’d have liked a map, but did not having one prevent me from loving the game? Not even.

This game is a love letter to those of us who loathe Call of Duty. It’s a discussion on the merits of acknowledging your past and not trying to shy away from it . There is racism, and violence and it’s unpleasant and that’s good because it should be. It’s not a game trying to romanticise American history. Bioshock Infinite takes the choices America made, holds them up and says “Here, look. This is what you were, this is what you could have become, and this is what you could become again if you aren’t careful” and, in a way that shooting endless waves of generically Arabic enemies never could be, it’s a lesson that’s important to hear. 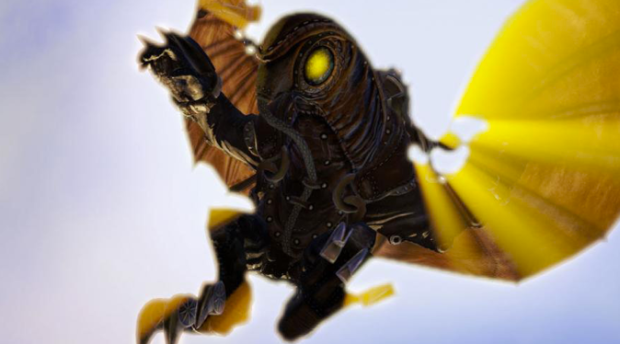 4 thoughts on “Review: The Best and Worst of Bioshock Infinite”