Do you know what was great? Loony Tunes. Almost every single character from the original series is a instantly familiar pop culture icon. It’s been more than 50 years since the originals were animated and most children today still know who Bugs Bunny, Daffy Duck, Porky Pig and everyone else is. Their catchphrases, their mannerism and their funniest moments are forever etched on our collective memory. Good thing it is because they were brilliant and deserving of the praise. Personal favourite? the ‘wabbit season, duck season’ exchange between Bugs, Daffy and Elmer Fudd. Fantastic.

In the intervening time there have been many attempts to re-invigorate the franchise and modernise it for new viewers. Most of these attempts have been…well, they’ve been fucking awful. We have the product placement strewn Space Jam, which is awkwardly terrible. I know some people see this as a childhood favourite – if that’s you, don’t revisit it. Lines like “put on your Hynes and your Nikes, have your Wheaties and a Gatorade and we’ll grab a Big Mac on the way to the stadium” just sound bloody awful to adult ears. There was Back in Action, which was epically ‘meh’. More recently we had Loonatics Unleashed and somebody must’ve been drunk as all hell when they thought this up: 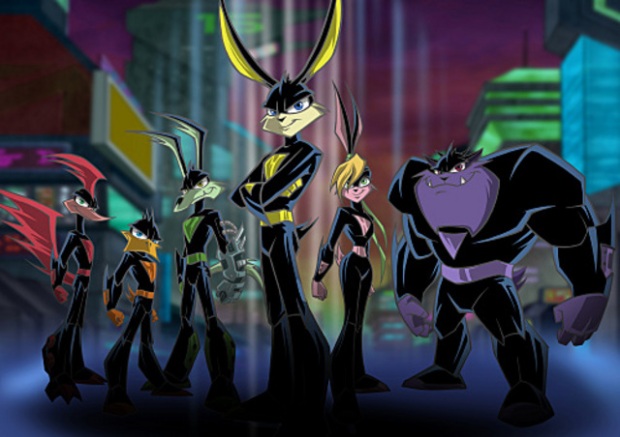 Not that they’re all abysmal failures. If anyone has anything bad to say about Tiny Toons then we’re going to have to take a step outside. The advantage that Tiny Toons had over previous efforts is that they didn’t try to reshape the classic characters but created a new cast. Rather than update for what a studio executive thinks a young audience wants to see based on vague generalisations from marketing (above) they create a younger generation of characters who didn’t recreate the source material but rather was influenced by it. Modern references and humour was able to be mixed in easily because it wouldn’t clash with the original’s brand of humour. They even set this up in the intro to the show.

That brings us to the newest version: The Looney Tunes Show which does the complete opposite of everything Tiny Toons did right. It features all the original characters plus two new additions in the form of Lola and Tina but in an updated format. Rather than shorts the stories fit a sitcom structure with Bugs and Daffy as room-mates in a suburban house. They deal with modern issues like dating and relationships with episodes focusing on issues like accidentally sending an email you didn’t want people to see. Basically it does everything it shouldn’t do in remaking the Loony Tunes.

I know, it shouldn’t work. But it does, the second season in particular. The sitcom format is possibly the biggest shift, and it takes a bit of a mental adjustment before you can fully appreciate how well they work it. The success of the show begins with the writing. Some of these episodes will surprise you with how well they twist the narrative threads together. Take one episode as an example: Bugs wants to get out of going to a peach festival with Porky, so he takes Daffy’s advice and lies about being busy. When he is caught out he concocts another lie, and it all snowballs to the point that winds up in an Albanian prison as a suspected spy. Meanwhile Daffy is out looking for a new place to live but has trouble finding a place that meets his expectations. The two plot threads stay separate up until the end of the when Daffy is part of the Marine unit who breaks Bugs out of the jail. Everything is so perfectly paced that this finale doesn’t feel out of place but the perfect punchline to the story. Not every episode finds its mark but you’ll find that the majority of the episodes will have you glued to the screen. 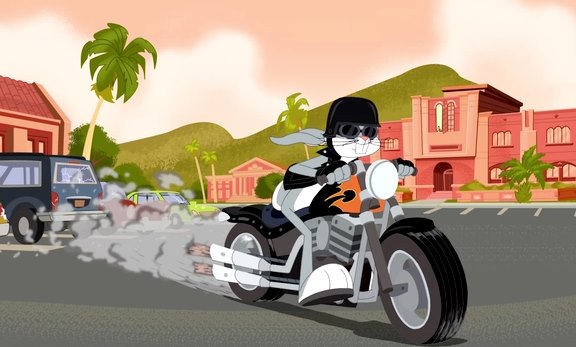 In this episode Bugs loses his trademark gloves and wears biker gloves – which alters his personality. Brilliant.

When it comes to the ever familiar characters there’s been little changed from the originals. Bug is still the wise-cracker and Daffy is still the schemer. Their situation has changed, with Daffy mooching of Bugs by living rent free, but at heart  they remain the same. The situational change merely allows the longer story structure to have some footing. As the supporting characters there are good and bad. Yosemite Sam works well as the neighbour from hell and Speedy Gonzales also works as a pizza restaurant owner. Why Witch Hazel has been given the voice of a sassy black woman is unclear, but it sounds out of place.

The biggest change to the line comes in the form of Lola and Tina. Lola was technically introduced in Space Jam but they forgot to equip her with a personality. In this incarnation she’s much more interesting as the ultimate scatter-brained obsessed girlfriend, voiced by the very funny Kristen Wiig. Whenever Lola turns up something brilliant happens, like when she gives Daffy a list of things to say on a date, only to fall in love with him when he reads them out load. We also have Tina, a love interest for Daffy. She’s a straight talking working woman who, in spite of his flaws, can’t help but care for Daffy. They have a great relationship and it often results in great material.

Now this reboot has come under fire from fans who’ve been quite vocal about the discrepancies between this series and the original on the internet (what a shock). It seems that the basis of most of their complaints is that it isn’t the original, but those people are never going to be happy with what they do so let’s ignore them. The one complaint that has some weight is that it’s lacking the amount of slapstick. It’s true, there isn’t as much slapstick as you’d expect but that was hardly the only type of humour the original show featured. Looney tunes has also had great writing and perfect comedic timing, and that takes the forefront here. More importantly we’d also know what to expect from the characters and just want to see them respond to the situation they’re in. When Bugs sets out to get revenge on a diabolical call-centre operator you know something brilliant is going to happen.

During the first season they experimented with a variety show types structure, and it wasn’t particularly successful. The musical numbers mostly served to stall the story than add to anything. The CGI rendered Wile E. Coyote and Road Runner segments felt a bit…off. They were animated fine but the timing was sluggish and Wile didn’t seem to concoct any big plans for capturing Road Runner, rather he’d just use whatever he happened across. In the second season this interruptions all but vanished and the focus was put on the sitcom storytelling and the show really found it’s feet. Season 2s episodes are almost universally better than the first season. 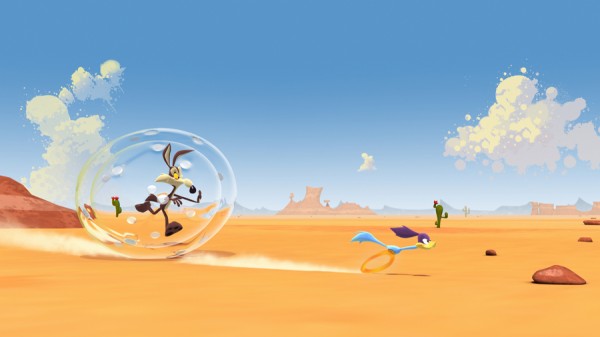 This is Grade A television by any stretch, but it is a damn site better than many of the sitcoms toping the charts at the moment. In turns of straight up comedy and writing it trounces drek like The New Girl and 2 Broke Girls (at amazingly features less racial stereotyping than the latter). Whether your familiar with the characters or not you’ll find plenty to make you laugh in this show, especially if Lola is involved. If you’re a fan of the original shorts then you’ll need to mentally adjust to the sitcom style but it’s well worth it. Hopefully the upcoming third season continues this trend of quality.