The History of Dracula on Film: Part 3

As covered in the previous segments of this series (available here and here) Universal Studios, under the management of Carl Laemmle and his family, brought the first official adaptation of Dracula to cinema with great success, and in turn launched the Universal Monsters franchise. With the success of the infamous vampire, a sequel was necessary. But with the Count meeting his end a new vampire was needed. Enter Countess Marya Zaleska, one of Dracula’s progeny hoping to find a cure. She took the center stage in, Dracula’s Daughter. 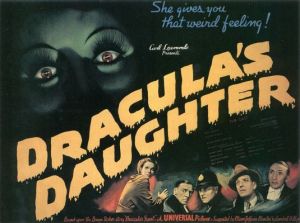 Upon purchasing the rights to this film from a rival studio, Universal had intended the picture to be nothing short of a horror epic. Unfortunately censorship and production costs forced the studio to tone down many aspects of the film. Originally legendary director, James Whale was set to helm the picture but his ideas were deemed too graphic by the censorship at the time so he left the job. It is a shame, as one can imagine what a director of his caliber could have brought to this film. The tale of Dracula’s Daughter ended up becoming a fusion of Bram Stoker’s story, Dracula’s Guest and the popular short story, Carmilla. In a particularly smart move, Universal hired Bela Lugosi to take part in the advertising of this film.

The story picks up immediately after the events of the previous film, as Professor Van Helsing is discovered at the remains of Whitby Abby with a corpse that has a wooden stake driven into it. In order to help him, the vampire hunter enlists the aid of his old pupil, Dr. Garth. But Van Helsing is not the only one needing Dr. Garth’s help; Countess Zaleska seeks the psychiatrist’s help in curing her vampirism. Naturally the plans to cure her bloodlust go awry and Garth but battler the daughter of Count Dracula.

Sadly this was the final production that the Laemmle family would be involved with as their financial problems piled up and the clan lost the studio they had built. As new owners took over they sought to make it profitable again. In order to test the waters, they re-released Dracula and Frankenstein and in doing so discovered there was still a market for the monsters. They went to work hoping to scare audiences once again. With the storm clouds of World War II looming ominously in the horizon, the powers that be noticed a potential market. With Americans already terrified of what was happening in Europe, the Universal Monsters were in a prime position to prey upon those fears, as those movies took place in a fairy tale-esque Europe. 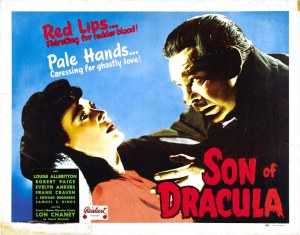 Since the previous flick was entitled Dracula’s Daughter, it was natural that the follow-up would be the Son of Dracula. With less emphasis on horror, Son of Dracula owed more to film noir than the German Expressionist style of its predecessors. The film followed Count Alucard as he accepted an invitation to join a family in the swamps of New Orleans. The thinly veiled plot twist being that Alucard was Dracula spelled backwards and that he was actually the infamous vampire all along. Bela Lugosi had developed a bit of an animosity towards the role that made him famous as he found himself typecast in a series of Dracula-esque roles, despite the wide range of acting talent he could bring to the screen.

The studio decided that the perfect man to take on the cape would be their newest actor in the horror stable, Lon Chaney Jr. Son of the legendary Silent Era actor who was originally intended to play the role in 1931, Chaney had become a star in 1941’s The Wolf Man, the movie which ushered in a new series of Universal Monster films. Son of Dracula like many other monster films of the time served as a reflection of the World War II era. Dracula left his native land in order to prey on the streets of the United States for the first time. Many have observed that much like the conflict in Europe, the vampire had arrived on the shores of America to bring chaos and death. Much to his credit, Chaney was decent in his take on the famous character, and was the first to be able to transform into a bat onscreen for all the audiences to see.

In 1943, the year Son of Dracula was released, another monster film was unleashed which would change the way Universal handled their monster films. Frankenstein Meets the Wolf Man, featuring both Bela Lugosi and Lon Chaney Jr., was the first time two of their monsters collided onscreen in an unbelievable battle. The powers that be learned with Frankenstein Meets the Wolf-Man, that combining monsters led to bigger profits. Thus in the next major motion picture that Dracula appeared in, he was not the only thing that went bump in the night.

In House of Frankenstein, the Count shared the screen with Frankenstein’s monster, the Wolf-Man, a mad scientist, and his hunchbacked assistant. As Chaney was to play the role that made him famous as the Wolf-Man, a new Dracula was found in the form of legendary actor, John Carradine. His take on the part owed more to the original novel than to Bela Lugosi’s iconic portrayal. In this film the vampire was a tall and gaunt figure with a very ominous presence. The picture followed, Boris Karloff as a mad scientist who escaped from prison with the intent of recreating Frankenstein’s monsters, encountering the other monsters along the way and utilizing him to his ultimate means of revenge. In this film, Dracula’s remains were part of a horror sideshow, but once the stake that originally slayed him was removed he rose once again to stalk his prey.

In the sequel monster mash, it was time for the vampire to receive top billing. House of Dracula, featuring a returning John Carradine, followed the infamous vampire seeking a scientist’s aid in curing his bloodlust. Over the course of the film, aiding Dracula transforms the scientist into a mad scientist as the Wolf-Man and Frankenstein’s monster show up to join in the mayhem. The film was successful at the box office, but the franchise was already on the decline. But the monsters were not the only source of revenue for Universal Studios during the 1940’s, a duo of comedians were also scoring box office gold, Bud Abbott and Lou Costello. In what was surely a strange decision at the time, the idea came to combine the two burlesque performers with the famous stable of monsters in the aptly titled, Abbott and Costello Meet Frankenstein. 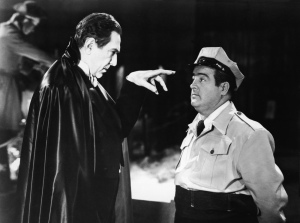 The bumbling comedians who never seemed to know who was on first, portrayed two deliverymen who find themselves entangled in Dracula’s plot to resurrect the Frankenstein monster and must join forces with the Wolf Man in order to stop the vampire. Returning to the role that made him a cinema icon, Bela Lugosi reprised the role of Dracula. Despite playing very Dracula-esque characters in films such as; White Zombie and Return of the Vampire, this was only the second time Lugosi played the actual Count. Though today’s audiences who are familiar with Buffy the Vampire Slayer, Shaun of the Dead, and the Monster Squad might not see a big deal with combining horror with humor, in the 1940’s it was unheard of.

The experiment was a success due to the fact that it did not compromise the strengths of the two elements; Abbott and Costello did some of their best comedic work and the monsters were as frightening as ever. Behind the scenes stories began of Lugosi’s difficulty on this film. Being a consummate professional the Hungarian immigrant was notorious for his strong work ethic and dedication to character, while Bud and Lou were comedians who were notorious for playing pranks and hiring a clown to hang around the set and keep them entertained.

Abbott and Costello Meet Frankenstein paved a new subgenre in horror by infusing it successfully with comedy. The film also marked the end of Universal Studios’ use of Dracula. With the end of World War II and the onset of the Cold War, American audiences were seeking new monsters. Dracula, Frankenstein, and the others who lurked around in the shadows no longer terrified fans as they sought out new creatures who were created by means of nuclear technology. This was to be expected as the atomic weapons the government utilized created a new type of fear and the horror genre sought to reflect this cultural shift. With American filmmakers leaving behind the gothic terrors that terrified people, a British studio lay waiting to pick up the slack.

6 thoughts on “The History of Dracula on Film: Part 3”