WARNING – No major spoilers will be mentioned but certain plot points will be. No spoilers past Season 5A 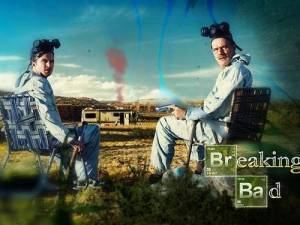 My first introduction to Breaking Bad wasn’t what you would’ve expected. Several years ago, I think 2006, 2007, the UK channel FX had an advert about it’s upcoming programmes and one five second clip had the dad from Malcolm In The Middle telling some baggy jean wearing junkie that he wanted to cook crystal meth, this was followed by a quick cut to a small explosion in some kind of R.V./Lab.

I never caught the name of the show that was being advertised but I remembered it purely for the involvement of Malcolm’s dad. Cut to 2010, I hear about this show called Breaking Bad, and I recognise it as the ad I saw many years ago. At this point Breaking Bad was still finding it’s audience, seasons 1 and 2 were out on DVD – which I rented out of interest – and season 3 was only shown on US television.

It’s important to know my back history with Breaking Bad because the show never really grabbed me until season 3, I enjoyed the first two – although I remember being disappointed when I first saw the plane crash at the end of season 2, I was expecting something more, now I think it’s one of the smartest elements of the show and of how far Walt’s consequences stretch – but they remained just really good TV, not the great it would later become for me.

There was a bit of a lull for me between season 2 and 3, this due to lack of availability in the UK, and I remember the very moment I decided to get back into it, it was after the end of season 4 and someone on MFC – I think it was John Law but don’t quote me on that -posted That death from Face Off, obviously that scene being iconic within the Breaking Bad universe. Sparking my interest over who it was in the pic and why they were missing half their face I (ahem) found alternative means of watching the series.

And it is here my journey with Walter begins 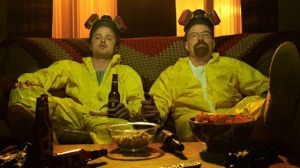 Something that makes Breaking Bad so great and so reawtchable is the fact that all the pieces matter, the show just gets better and better every season with the second half of season 5 being their strongest run but the whole show is about the journey, watching Walt transform into Heisenberg and once you know the destination you can look back on certain scenes with a different viewpoint.

For example, the death near the end of season 2 where Walt watches someone choke to death, on first viewing I still liked Walt and I thought that he just panicked, a mistake anyone could make, but rewatching it later on I couldn’t tell if it was an accident or if Walt deliberately did nothing because I had seen his dark side in full effect so that made previous scenes, like the choking, harder to put into a simple black or white category.

There in lies the greatness of writing Walt, we spend so much time liking him and rooting for him that when the time comes at the end of season 4 and we realise that he is in fact the villain it’s a shock, you don’t expect it because all his actions beforehand, the choking, the ‘Run’ scene, stuff like that you pass off as Walt being Walt but when you have undeniable proof in front of you, things change and leading into season 5 you had no idea what to expect.

It’s the subtlety of the change in Walt that is mirrored in the show itself, the thing starts off as a black comedy, plenty of humour to be had with the meek Walter trying to be a drug dealer, the directionless Jesse spouting off Bitch like a machine gun with tourettes, bodies, half dissolved by acid crashing through the ceiling, Walt spending three episodes trying to kill one man (that’s funnier in hindsight). Basically the show starts off as one thing then spends the rest of it’s time getting progressively darker and darker as Walter turns darker himself, transforming fully into Heisenberg. That level of future building, of a clear path the protagonist is to take, that makes Breaking Bad stand out more than your average TV drama.

Of course, while Walt is the main character of the show he surrounds himself with a plethora of a just as brilliant supporting cast, Jesse Pinkman goes from stoner without a care in the world to half of the biggest drug lords in the country, his transformation into a more humane and thoughtful character comes at the price of losing so many people he cares about and even doing some of Walt’s dirty work and you have to wonder if Jesse’s life would’ve been any better if Walt hadn’t found him.

Hank turns from DEA jock into one of the best characters on the show, traumatised by his supposedly bad-ass action and his time in Mexico then being attacked by the cartel Twins show a more sympathetic and relatable figure who pretty much becomes the true hero of the show once Heisenberg takes over.

Skylar White, Walt’s loving wife grows herself, while some mistake her actions for her being a bitch she’s the most sensible out of all the characters, she thinks 5 steps ahead of everyone else, looking at all the angles, making sure all her husband’s tracks are covered while also trying to get him out. She doesn’t want to be in this business but Walt made the choice and she’s making the best she can of it, despite how much it hurts her to do so.

And that’s not mentioning the others, the straight-talking, no-nonsense Mike who underestimate the lengths Walt will go to, the cold and calculating Gus, one of the best TV villains of all time who hides in plain sight and, like Skylar, thinks ahead of everyone else but, like the saying goes, his overconfidence is his weakness.

Breaking Bad started it’s life for me much like it did for everyone else, a funny little show about the dad from Malcolm In The Middle cooking up drugs, you might have caught it from the beginning or you more likely caught some good word of mouth about it. Five years later and a combination of an original story that could anywhere, fantastic acting across the board, some of the best writing for a TV show I’ve ever seen and a progressive curve of greatness that grows and grows as the show goes on, reaching its apex just weeks earlier with Ozymandias, one of the best episodes of television I have ever seen and the end of the beginning of the end for Walt as his kingdom collapses around him, his actions, several months in the making (the whole show takes place in just two years) finally catching up to him in the worst way possible, and we have one of the best shows ever created. Breaking Bad shows that with perseverance and trust, greatness can be achieved, the closest show to this would be The Sopranos and that began it’s life nearly ten years before Breaking Bad.

It will be a long time before we see something like this again.

One thought on “Bad Broken – A Reflection on ‘Breaking Bad’”