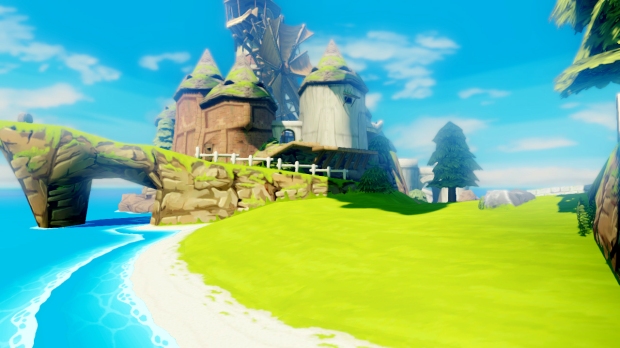 It’s a franchise title that should need no introduction, The Legend of Zelda. Since the 80s it has been a staple of the Nintendo release schedule, with a new iteration released every few years on both home and handheld consoles. With the Nintendo 64 the series made the leap to 3D with The Ocarina of Time – regarded by many as the best Legend of Zelda game by many and by others still one of the best games of all time. It introduced Nintendo gamers to the wide vistas of Hyrule, rendered in glorious polygons. We pretty much thought games could never look better than that at the time.

We were of course wrong. Games studios make graphical improvements at an alarming pace; every new generation of console looking and feeling better then the last. Comparing the first in a series like Tomb Raider or Metal Gear Solid to the latest is often mind-blowing. We know the games have improved but it’s easy to forget by just how much.

But there is one game in the Zelda franchise that always stood out. A 2003 release, The Wind Waker, took the series in a whole new direction in terms of both visual style and gameplay. Gone were the angled polygons and realistic models. Gone were the sweeping plains of Hyrule and your trusty horse. Instead we were provided a wide and treacherous ocean; a place none from Link’s village had ever explored. There was no Princess in distress, no kingdom to save from ultimate peril; instead Link’s motivation is the rescue of his sister from an enormous, supernatural bird and eventually from the evil Ganon himself.

For the first time ever the creators of The Legend of Zelda had strayed from their tried and tested formula and begun something truly new – a new world for the Hero of Legend to explore. It was not without controversy; both the changes to gameplay and the new look polarised gamers and critics alike. Now, in 2013 a full 20 years after the original release of the game, Nintendo return it to us as The Legend of Zelda: The Wind Waker HD, a truly gorgeous remake of what is easily my favourite Zelda game.

Joining you on the quest to attain the strength to defeat Ganon, and to ultimately rescue your young sister and the other kidnapped girls is The King of Red Lions, a sentient, talking boat who serves as both advisor and steed in this new, oceanic world. Dotted around the maps are islands with dungeons and secret areas. Some are necessary to the overall quest, some give Link new items or rupees galore. Having to pilot King of Red Lions between each point, guided by the wind, is a most engaging mechanic. The wind is a fickle mistress and the ocean is as deadly as it is inviting. Wild storms and sea monsters await you, as do pirates and other such nasties.

There’s never a dull moment on the high seas. 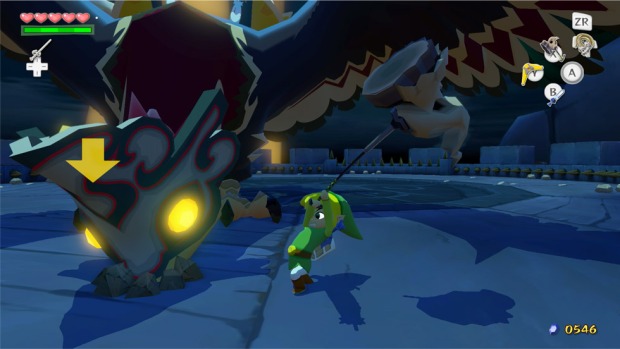 The game looks truly amazing in high def. Rendered out by the WiiU the graphics are as smooth as could be, and the increased power of the new console has allowed the developers to increase draw distance, add much higher fidelity textures and add new lighting and visual effects to make the game one of the most atmospheric there is. An early dungeon, the Forsaken Fortress is a nightscape tangle of stonework and sharp cliffs. Lit only by moonlight and search lights the map drags you into this world and gives you a true sense of the scale of Link’s adventure.

Link himself is adorable. I’ve always loved the Cell Link design and in such crisp graphics he is perfect. His face is expressive, and the little things like his squint when sidling along a ledge or his interactions with other characters make him wonderfully realised, especially considering he says not a single word.

I’m playing with the Pro Controller – I find the Gamepad a little cumbersome for this title – but this allows me to have the secondary screen of the Gamepad available at all times; I use it to display the dungeon or world map as an easy reference and this saves a lot of time in constantly flicking back and forth between screens. Controls are responsive and although I did have a small problem sidling at the start this was a UI issue more than a control problem; the game doesn’t have any differentiation between buttons you hold versus buttons you press. I fell off a lot until I figured out to hold the button to remain pressed to the wall.

The Legend of Zelda: The Wind Waker is a classic revisited and is the most fun I’ve had in a game in months. It’s a better game, in my opinion, than Twilight Princess or the hand-held entries since and I’m looking forward to seeing how A Link Between Worlds shapes up come release. If you’ve played Wind Waker already, back in the good old Gamecube days then this is worth picking up. It’s available as a physical disc or an eStore download and has enough newness, as well as having passed enough time, to be engrossing. If you haven’t played Wind Waker, and are a new Zelda fan or just one who missed it the first time round for whatever reason then I urge you to give it a shot.

It’s quirky, and fun, and atmospheric and truly engaging. It’s a refreshing take on an otherwise repetitive franchise and for me it’s one of my few nearly perfect games.