For about seven months last year Marvel decided to pull out all the stops and throw their two flagship franchises at each other in a scrap to end all scraps. The Avengers and the X-Men in all out combat, out for each others blood. Who will win? Would they all walk away? What could possibly drive them to this?

Well, I read the 81 issues that comprise of this ‘event’ over the weekend. It…was the epitome of why the comic industry is currently misguided. Let’s break it down.

There was a MASSIVE amount of marketing surrounding this story. Posters, ads in the back of comics, flyers…our comic shops were plastered with promos for this epic tale. This is the first way they dropped the ball on the marketing. Bringing in new readers is the biggest challenge of the comic business. Current readers are extremely loyal, but convincing people to make the time and financial commitment to following these serials is problematic, especially with the deeply embedded storys. With both X-Men and The Avengers pulling in big bucks in the box office and becoming familiar to wider audiences this was the perfect title to draw in newbies. This could’ve been more effective than Free Comic Book Day. 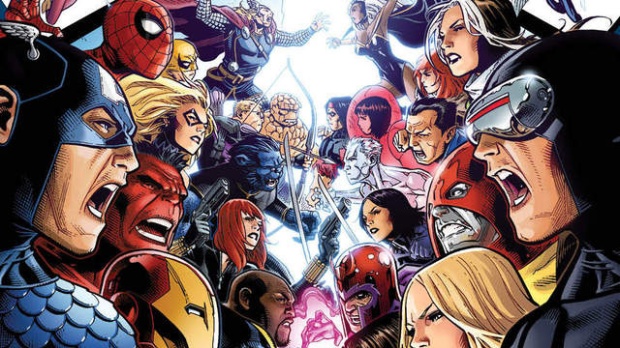 This poster promised me a screaming match!

The second ball drop came during the run of the story, and occurred when they aped the clever technique of the previous ‘event’, ‘Civil War’. During that story the lines were drawn between Iron Man and Capt. America, each taking an ideological stance on whether or not superheroes should be regulated by a government. They both made good arguments and the fans could side with the faction they agreed with, posting the supplied banners on forums. In this story they released alternative covers for buyers can declare whether they’re for the X-Men or the Avengers. The problem is that they’re both in this conflict for stupid reasons. There’s a mystical bird flying through space and one side thinks it will save the world even though it’s only function is to destroy the world. Who the hell would side with them? That brings us to the next point…

I’m with the X-Men! For some reason!

What made the aforementioned ‘Civil War’ plot so popular (at the beginning, anyway) was the very real-world questions it asked. What happens when a superhero causes a tragedy in the course of their mission? Could the government bring superheroes in line? The plot in ‘Avengers VS X-Men’ took a slightly less realistic angle. There’s a giant fire bird flying through space and it’s going to merge with a teenage girl. The Avengers think the ‘Phoenix’ is doing to destroy the planet (based on the fact that this is literally what it exists for) and the X-Men think it’s their saviour based on nothing.

When the X-Men and the Avengers throw down I want it to be for a reason I can understand. I want to be conflicted about who should win, not automatically write one side off as delusional. I know this is comics and realism is supposed to take a back seat but without a *little* bit of emotional grounding the whole thing becomes just noise and colour. 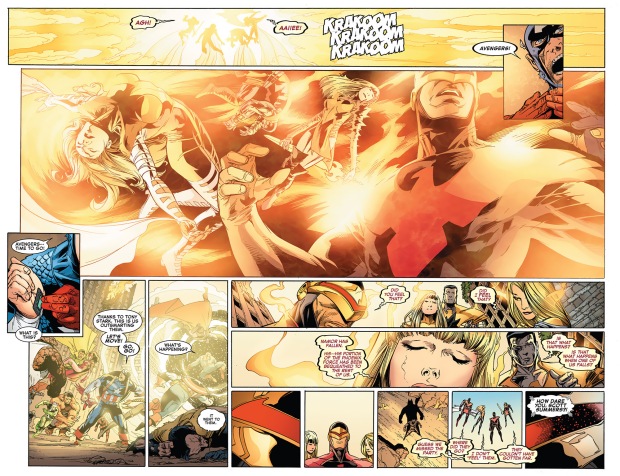 “I can totally relate to their problems!” – No-one ever.

#8 – It Wants to Force Readers into Buying New Titles

Let’s say that you’re a big X-Men fan. This is the biggest X-Men story of the year, and has a huge impact on the characters long term. Of COURSE you want to read the whole thing. This means you need to stretch the budget and buy titles who may not normally invest in. Shouldn’t be to bad, right?

After buying Wolverine and the X-Men, Uncanny X-Men and X-Men Legacy you need to pick up Avengers, Avengers Academy, New Avengers and Secret Avengers, doubling the titles you have to buy for one story.

But that’s not all – there’s the mini-series titles that form the backbone of the plot. Avengers vs X-Men ran for 12 issues, plus there’s AVX: VS, Avengers vs X-Men: Infinite, Marvel Point One, Avengers: X-Sanction, AVX: Consequences, AVX: Program and for some reason A-Babies vs X-Babies. Wait, what?

Plus there’s about six different covers to each issue. Because reasons.

Including the all-popular ‘nothing on it at all’ cover.

#7 – The Action and Story are in Different Titles

Ok, never mind all the side bullshit. Just buy the central 12 issues of Avengers vs X-Men. Funny thing…they spend all their time talking exposition. Where’s the real fighting, like Colossus trading blows with The Thing? Ah, that’s in AVX: VS, the mini-series dedicated to the big punch-ups. In an epic comic book smack down you need to buy the story and fighting separately.

This is like the worst kind of DLC. At least you can pick all these up in the comic shop. Actually, that’s not true.

I hope you have Comixology or a similar app because some of the issues were only made available online. Don’t have access to such an app? Tough shit.

And don’t forget your ‘Marvel Augmented Reality App’. If you have enough space on your device after downloading all the comics you need to download this additional app and point your camera at the pages to make them do…something. I don’t know what they do, I wasn’t bothering with that rubbish. In one issue it does translate the Russian the characters are speaking into English, but I’m not playing this game. Just how many issues do you have to buy to get the full story, anyway?

Actually this is how I do all my reading.

#5 – You Have to Buy a Ridiculous Number of Issues

Let’s flash back to the 90s. There was a pretty cool X-Men crossover called The X-Ecutioners Song that spanned X-Men, Uncanny X-Men, X-Force and X-Factor. Being before employment age I had to get an advance on my pocket money to get the full lot. Fortunately it was only 12 issues, so it was manageable.

So how many issues do you need to get the full Avengers vs X-Men run? EIGHTY-ONE. That’s more than most peoples annual comic budget. What the hell do they do during all that time?

#4 – It Goes on Pointless Tangents

During the time that this conflict between two small groups of superheroes takes place on Earth various branches of the teams find themselves travelling quite far afield in order to kill time. We deal with two entirely separate alien races and an underground city. Overall these additions to the story contribute nothing at all. There is a unbelievable amount of filler in this story, including an entire issue of Nova flying through space with an inner monologue. Who the hell is Nova?

Alan Moore always sets himself a specific page limit when he goes into a story, and adjusts the story to best fit it. Anything unnecessary goes in the bin. Marvel and DC take the opposite approach with their ‘event’ stories, jamming in every little idea regardless of quality or suitability. This is why, fifteen years later, The Killing Joke is still being published while Avengers vs X-Men will eventually join the forgotten ranks of Darkest Night and Secret Invasion.

#3 – The Characters Are Misused

Ok, with this much space to fill there’s going to be a number of second and third tier characters getting a look in. But so long as we get Wolverine brawling with Captain America it’s all good.

What do you mean, Wolverine is on the side of the Avengers?

That’s just a poor idea. We also have Cyclops, Emma Frost, Namor, Colossus and Magik as the heavy hitters for the side of X-Men, which extends to just Colossus trading blows with The Thing or Red Hulk because no-one takes those others seriously.

First – why is the Hulk red? Second – WHO ARE THESE PEOPLE???

#2 – There is Nothing at Stake

Going into this, we know one thing for certain. One main character will die. Likely Cyclops (I haven’t finished it yet) because he’s horribly misguided all the way through and will likely see the error of his ways and sacrifice himself or some bollocks. The big companies are loathe to kill off any more than that because they don’t want to challenge the fans, but not killing someone takes away from the claim that it will be ‘epic’ and ‘change the Marvel/DC universe forever’.

Not that anyone stays dead in Marvel comics anyway.

Even beyond that, when you get to the nitty gritty, everyone finds it extraordinarily easy to shrug off mortal wounds. Cyclops can blast through steel at close range, yet anyone hit by his blast just winds up crouched down and smoking a bit. The almighty Phoenix, who we have seen tearing through entire planets in seconds, can do little more on Earth than knock everyone on their arses. Even though this is all out combat the players respond as though they’re in a paintball fight.

At least three of these people are attending their own funeral.

#1 – It was Written for the Wrong Reasons

Great stories grow from a seed of inspiration lodged in the mind of an artist. It flows naturally, the characters feel genuine and it’s ultimately satisfying. This story has the stink of the conference room about it. People looking at sales figures and kicking around ideas for a way to move more product. Bendis, an excellent writer when left to his own devices, would be given boundaries and expectations. This is not a story that had to be told – this is a marketing ploy and a poor one at that.

If you want a really great read, keep an eye out for our upcoming series on the 100 Greatest Graphic Novels of All Time, which we have in the works. This one is best used as an example of what doesn’t work in the comics industry.

One thought on “10 Reasons ‘Avengers vs X-Men’ Fell Flat”