The Scene: Storming onto the rooftop of his building a tormented Johnny (Tommy Wiseau) proclaims loudly “I did not hit her, it’s not true! It’s bullshit! I did not hit her! I 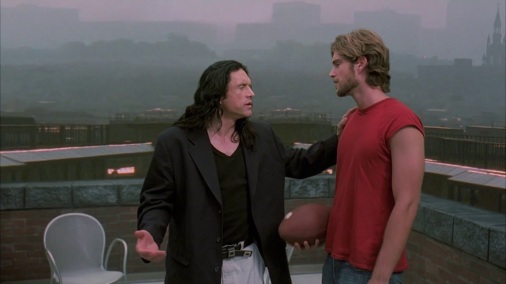 did NOT…” before effortlessly transitioning into greeting his friend with a warm “oh, hi Mark”. This is because his best friend Mark (Greg Sestero) is casually sitting on the roof as one does. Unbeknownst to Johnny, he is the source of the stringy-haired man’s problems because Mark is having an affair with his future wife Lisa. Feeling particularly guilt-ridden he philosophizes about women with Johnny, even regaling him with a story of someone he knew who was beaten by her boyfriend (which Johnny finds hilarious apparently).

Breakdown: I can not think of another movie that has ever been produced like the Room. It fails at every level of moviemaking, yet in doing so it unintentionally becomes a work of comedic brilliance. For proof look no further than this scene, what begins with Johnny raving about being falsely accused of domestic abuse completely turns on a dime. To say it is amateur and hamfisted would be an insult to beginners at the art of holding ham in their fists. When most of us are told a story of domestic abuse, we normal people shudder in mortification. But according to those behind the scenes Wisaeu was determined to have a laugh during this scene as a reaction and would not be swayed, so Johnny reacted as if Mark had just told him a joke he had heard earlier in the day.That being said your average screenwriter can slave away their entire career and never come up with a line so memorable as the simple “oh, hi Mark”.

Best Bit: The line “Oh, hi Mark” has become forever associated with the Room and has ascended to the overall pop culture lexicon. It has been the subject of T-shirts, parody, and memes. When NBA star Marc Gasol played for the Memphis Grizzlies this clip was played in the arena when he made a big play. According to Urban Dictionary this is the perfect way to greet any friend named Mark in your own life.

← Worst Episode of ‘How I Met Your Mother’ Ever
Retro Review: ‘Freeway’ →