5 Other Marvel Movies Madhouse Should Make

Madhouse is a Japanese animation studio that have produced such popular anime shows like Death Note and Trigun. They also teamed up with Marvel to deliver a few miniseries. They did ones for Iron Man, X-Men, Wolverine, and Blade, as well as 2 movies (Iron Man and this Black Widow/Punisher feature). I just got tuned in to these pretty cool projects, and I hope they get keep developing some. Here are a few I’d like to see.

Spider-Man is one of Marvel’s biggest meal tickets, and with his live action film rights roped up at Sony Pictures, why not turn to this animation studio. From what I could tell from previews and that one movie I watched, they definitely like to go with fluid action with some excessive gymnastics. It seems cool with Black Widow, but the it was a bit much for The Punisher. It certainly wouldn’t be out of place for Spider-Man though. They would go to town with web-swinging chases and bouncy Spider-fights.

The Japanese are no strangers to giant monster movies. They created a whole subgenre about it, their most famous being Godzilla, as if I had to tell you. They have tried a few times to tell solo Hulk movies, but something was always missing. I think it’s that kaiju aspect. Most of time, they go for a Mr. Hyde dual personality type of story, but if they do it more like a disaster movie, where the disaster is the Hulk.

Lately, the Thor comic has been awesome. Thor has been teaming up with his young arrogant self and his older seasoned self taking on a bigger than life threat in the God-Butcher, a once loyal worshiper who turned on his own god and eventually all gods leaving prayers throughout space and time unanswered. I think it would make a damn cool anime in the same vain as Princess Mononoke or other Studio Ghilbi productions. That’s pretty ambitious. Maybe in the same vain as Inuyasha instead. Either would be cool.

If they were going to make an animated miniseries (or movie) about one of Marvel’s martial artists, Shang-Chi might have been at the top of the list. Being an Asian superhero and one that Marvel writer Jonathan Hickman has been trying to promote, he seems like a shoe in. I’m a big fan of Iron Fist though, especially ever since they very awesome Ed Brubaker/Matt Fraction Immortal Iron Fist series that sent Fist back to the interdimensional land where he got his powers to fight in a tournament against similarly powered warriors. 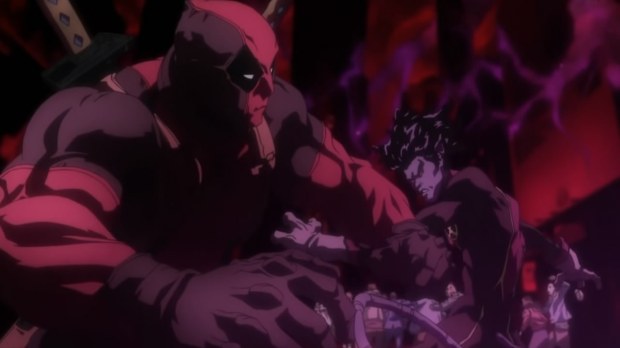 Deadpool in the X-Men Anime

Here’s where my bias comes in. Deadpool is my absolute favorite character of all time thanks to writer Joe Kelly’s run on the series as well as the Cable and Deadpool series. Deadpool was more than just a motormouth. He was a demented tragic figure who was trained in fighting, gymnastics, stealth, swords, explosives, and guns. Deadpool can be literally every anime trend in one franchise. He even already made a small cameo in the Madhouse’s X-Men series.

5 thoughts on “5 Other Marvel Movies Madhouse Should Make”