This may come as no surprise to you savvy internet types, but Twilight is directly responsible for the printed bile that is 50 Shades of Grey. But when this is brought up with the 50 Shades target demographic they may remain sceptical. I’ve had personal experience with this, mentioning it in the office to some avid fans only to be informed that “it has nothing to do with Twilight!”. The reason they missed this connection is because they haven’t been lucky enough to experience fanfiction. 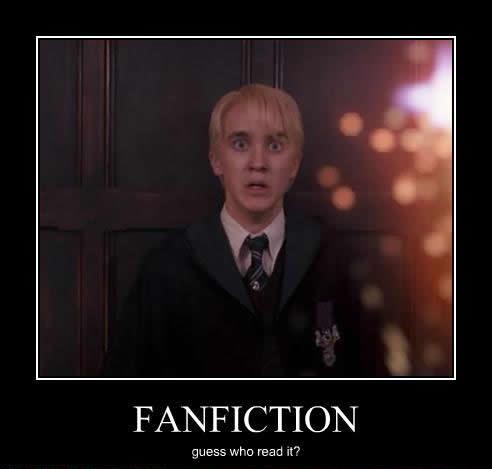 In short, fanfiction is when a member of the public writes their own story using the setting and characters of an established fictional universe. Popular subjects for fanfiction are Harry Potter, Star Trek and similar franchises. Even if you’re not a regular reader of fanfiction you must be able to see the appeal – taking your favourite characters and pinning your own tale, maybe adding your own characters or even yourself. Adding a sexual element is not uncommon either. The hobby has been around for centuries but it’s the advent of the internet that has seen a real boom. There is an endless amount of fanfiction being uploaded to the internet with quality ranging from the infamous My Immortal through to the professionally produced web-series Star Trek Continues.

The author of the ridiculously high selling ‘erotica’ series 50 Shades E.L. James started her career (which to date comprises of the aforementioned series) as a fanfiction writer. Going under the name ‘Snowqueens Icedragon’ she sunk hours upon hours in Masters of the Universe. Although why might assume that this would concern itself with adventures of Prince Adam od Eternia it’s actually straight up Twilight fan fiction. Don’t go looking for it, publishers have gone to lengths to erase it of the internet.

But we do have this nifty banner. Must’ve taken minutes in Photoshop.

As you’d expect with fan fiction the characters played a central role in the conversion. Although the names have been changed from Bella Swan to Edward Cullen to the laughable soap opera monikers Anastasia Steele and Christian Grey the remain essentially the same. The author-insert character Bella Swan is described as clumsy, naive and ordinary looking in spite of every man she passes falling strangely in love with her. If you want to describe Ana Steele it’s a simple matter of swapping the names in the given description. Edward and Christian share the traits of being wealthy, culturally sophisticated, mysterious and expects an unreasonable amount control over the lives of their loved ones.

Granted one might assume that by the time the story had evolved into something else James might want to put her own spin onto things. When you start to draw a parallel between the final release of 50 Shades of Grey and Twlight you’ll find that they’re the same story. ‘Bellastasia’ meets ‘Christward’ and notes his chiseled handsomeness while he acts strangely attracted to her (but she’s CLUMSY!). They find themselves drawn to each other but Christward is reluctant to engage with her because of his dark secret. Bellastasia insists that she can handle whatever it is, and he reveals he’s a vampire/fetishist. They start a relationship, she meets his perfect and wealthy family, she tries to adapt to his lifestyle while he tries his darndest to ‘protect’ her and monitor every aspect of her life.

There are some fine details that get caught up in the plagiarism/tribute/whatever. Bella has the Native American boy Jacob to provide her with an Option B relationship. He’s a pandering ‘nice guy’ who would be classed as a stalker in the real world. Anastasia has her own minority borderland stalker in the form of José Rodriquez. They also both have sassy best friends who alternate between encouraging and warning the protagonist against their relationship. Christward insists of spoiling them with over-the-top gifts such as cars and laptops.

It’s hard not to think of the more talented authors waiting for their big break, or even those who are published and haven’t broken the bestseller lists. People sweat over their personal works without an once of the recognition James has received for her 50 Shades series. On the other hand we can’t blame an author for their rubbish becoming a phenomenon. Nobody hates on Tommy Wisseau for his opus The Room (mostly because we’re still pretty confused by him). Maybe the blame should be shifted onto the hordes of readers who have bought a copy. Although it’s accused of being misrepresentative of BDSM lifestyles (although I can’t comment on that I do know that Christian and Anastasia read as straight up abusive regardless of sexual behaviours) it does offer a darker edge of erotica to an audience for whom such matters would be considered taboo. It’s easy to understand why the middle-aged female readership who turned the book into a runaway hit have taken an interest in it. There’s no condemning curious minds.

Unless you’re a cat.

Clearly there was a demand in the market that was not being met. In a perfect world something that is better written, and features more rounded characters than 50 Shades would have filled that niche. Instead the spot was taken by fanfiction that should never have been allowed to break free of the internet, and everything that comes after will be considered to be riding the coattails. Based on the writing ability demonstrated and the fact that 50 Shades is lifted plot point by plot point from Twilight this writer feels it unjust that James is sitting on a multi-million dollar franchise.

E.L. James is like the counter balance to writers like Edgar Allen Poe, whose writing would inspire and move people for centuries but died penniless and unrecognised for his brilliance. Have your say below.