Like the indie smash hits FEZ and Braid, and recent iPad bestseller Monument Value, this little title works with the concepts of perception and manipulation of the physical level to avoid obstacles and guide the character to the doorway that will take them to the next level. 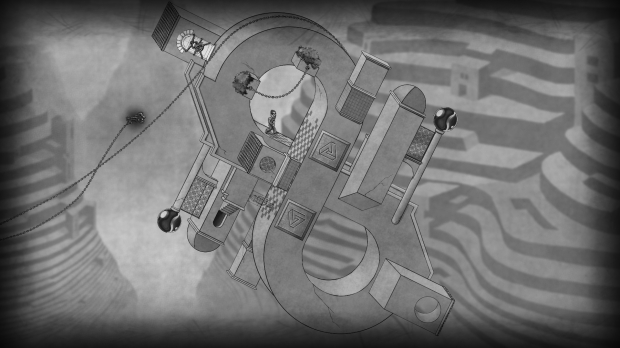 Based heavily on the works of M.C. Escher – to the point that the loading icon is one of his sketches – each level includes puzzles based on optical illusions caused by perspective and gravity. The protagonist, mathematician, can be moved left or right using the A and D keys while the entire level can be spun on an axis using the arrow keys. Using a combination of the two the player must retrieve any keys and make it to the door. Every ‘world’ introduces a new element to the game including vortexes that trap anything entering them in place, alternative ‘white’ world that intersects with the normal world and veils that protect the player while gravity is moved.

The levels are small but intricate with some clever puzzles. Most will give the player a healthy sense of satisfaction similar to completing a puzzle in Braid or Portal, although a couple can be solved with enough fiddling around. At any time during the game the player can rewind time with the spacebar, taking the level back to the point they got stuck without starting from scratch. 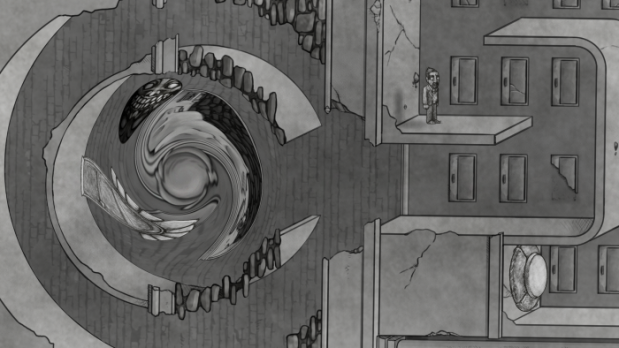 Like any indie game this has a unique aesthetic. Everything is drawn in shades of grey and in pencil sketches. Although it shares elements with other indie platform puzzlers that have been in vogue lately it has a distinctive look that helps draw attention to it.

If you want to lose an hour or two scratching your head and trying to see connections that might not be where you think they are, The Bridge can be obtained cheaply on Steam.