The Assassin’s Creeds franchise has become one of the most recognisable properties in pop culture. The distinctive white hooded, free running, wrist-bladed assassin became a selling point for the PS3 and X-Box 360 when they first arrived on the market, looking so lovely on our new HD home entertainment systems that it became a best seller before everyone found out that it’s basically the same three missions played again and again. With the success came the sequels, and Ezio de Auditore da Firenze became the series golden child, kicking around with Leonardo da Vinci for a total of three games before the reigns were handed over to Conor for the fifth game in the main series (baffling called Assassin’s Creed 3).

To say that things had grown stale by this point is to say something terribly obvious. The mechanics and presentation have been left in the duct by current releases. The main story shows no signs of EVER finishing. The online addition was fun but grew tiresome. And Conor’s adventures in small game hunting was dreadfully boring. Wading through snow while the story got teased out in between forced tutorials on economics and hunting and construction and other completely optional and pointless side missions did not bring to life the action depicted in the marketing.

Sales remained strong, however, and Assassin’s Creed: Black Flag turned up before long, putting central character Desmond on the back burner and making it all about pirates. And because Ubisoft have the attention span of a fruit fly in a blender the next instalment Assassin’s Creed: Unity is already being heavily promoted in shops less than a year before the last game was released. The benefit to this is that it doesn’t take long for an Assassin’s Creed game to wind up in the bargain bin. So here we are.

This is my favourite game in the series thus far.

There’s a variety of locations of different styles, the hunting mechanics have been pared down and are largely optional, and being able to switch between the sailing and free running locales stops the game from getting bogged down in repetitiveness. From jumping around the rooftops in Havana to exploring jungles and sailing the high seas there’s often something new to see and do. Some of the activities are recurring throughout the game, such as the optional diving bell missions wherein you explore a sunken ship to find treasure and upgrades, manages to keep each location different enough to make them unique. Every area is littered with collectables from loot chests to Animus fragments to song sheets (collecting them gives your crew a new song to sing while at sea), giving that OCD itch something to scratch with. This does, however, get a bit overboard. The map is covered with dozens upon dozens of little spits of land containing a single collectable item, and I can’t bring myself to stop the ship, jump out, swim ashore, find the item, swim back and climb aboard the ship again each time for the satisfaction of completion. 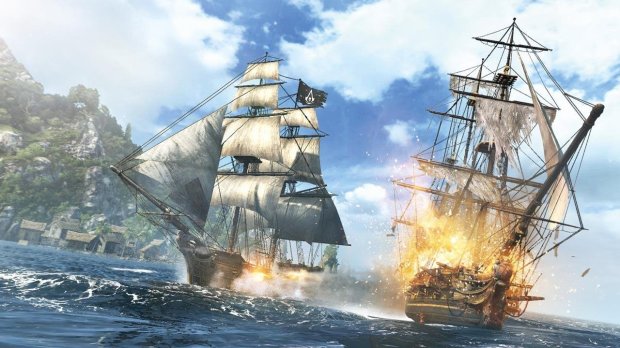 Finding treasure maps presents you with fun little diversions. After reaching the designated co-ordinates you must find the landscape features scribbled on the map (that aren’t entirely accurate) to collect the loot. By diving sunken wreaks and finding treasure you can get plans to unlock upgrades for your ship, allowing you to tackled the tougher challenges roaming the map, such as Moby Dick and the Flying Dutchman.

Taking the wheel in this adventure is Edward Kenway, a pirate captain who, after a naval battle, finds himself marooned with a wounded member of the Assassins. Killing him and taking his identity Kenway sparks inadvertently disrupts the local Assassin’s mission against the Templars. Having now thrown his dice in the ring he must pick a side in the generations old conflict while pursuing his own fortunes. As usual you cross paths with a number of famous figures and sometimes murder them. The story is more interesting that usual for the series, but it’s not the key selling point. Kenway is a more likable characters than the moody Altiar and the angst-ridden Conor. 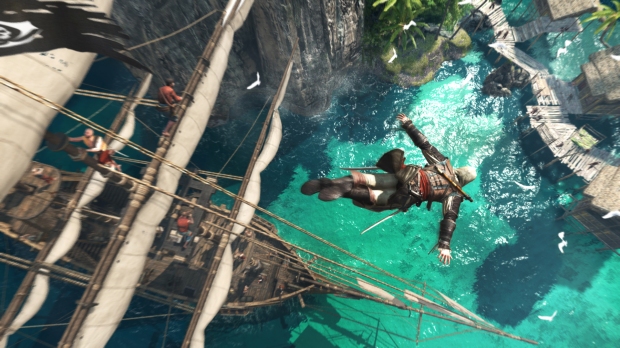 If you think the series has some life left this can be picked up pretty cheaply. Otherwise there’s another two coming out this year!