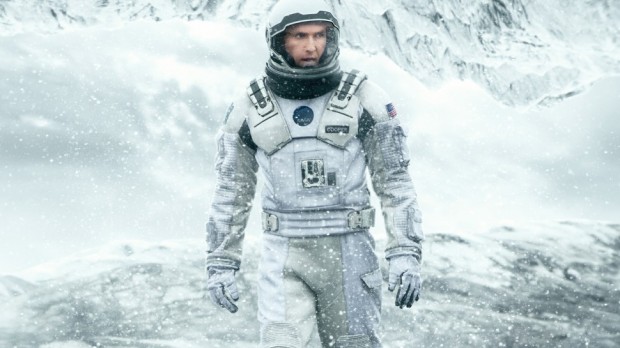 Plot:  In the mid 21st century crop blight results in massive famine and technological regression.  Former NASA pilot and engineer Cooper (Matthew McConaughey)  now works on a farm with his father-in-law Donald (Jonathan Lithgow) and his children Murph (Mackenzie Foy) and Tom (Timothee Chalamet).  When Murph discovers a strange unknown intelligence sending coded messages via gravitational waves, the messages lead son and daughter to a secret NASA installation run by Professor Brand (Michael Caine).  There they discover that due to the blight, within another generation no one will be able to survive on Earth.  But Brand has a plan.  A wormhole has been discovered around Saturn that leads to another galaxy.  Over the last ten years ships have been sent through the wormhole looking for viable planets.  Brand convinces Cooper to embark on a mission to find the missing astronauts and hopefully a viable planet for the people of Earth to colonize.  Together with Professor Brand’s daughter Amelia (Anne Hathaway), Doyle (Wes Bentley), Romilly (David Gyasi), and two astute robots, the team will travel to the farthest reaches of space on a mission to save the entire human race.

Review:  I’ve been blessed the last few months to see a string of remarkable movies in the theater.  Dawn of the Planet of the Apes, Guardians of the Galaxy, and Gone Girl have been nothing less than fantastic.  Apparently, I’m still on a hot streak as director Christopher Nolan’s latest masterpiece Interstellar reaches for the stars…and succeeds.  Rarely have I had such an amazing, enthralling, and awe-inspiring experience at the theater.  Interstellar proves to be a movie you’ll ponder days after the credits have rolled.  Intriguing as it is captivating, the only thing I can compare it to is 2001: A Space Odyssey.  And of course the influences from that film definitely show throughout Interstellar, as well as Metropolis and Blade Runner.

One of the complaints I’ve heard about Interstellar is that it’s “too ambitious.”  I find this idea laughable.  In an era where everyone wants to reboot classic films, churn out mindless comedies, and release films that are devoid of substance, I welcome any director who strives for ambitious.  I’d rather have Nolan reach for the heavens and fail miserably than watch Eddie Murphy in a fat suit again.  As much as I admired Nolan before, my level of respect has increased tenfold after seeing this film.   Nolan’s talent lies in creating not just movies but worlds, such as the dreamy depths of the unconscious in Inception or the dark brooding world of The Dark Knight.  Interstellar is no different.  Whether it’s the majesty of Saturn (it literally looked like they filmed around Saturn), or the cold tundra of an ice world, accompanied by arguably Hans Zimmer’s best score, the special effects done by Double Negative are astounding.   The visuals pair nicely with  Hoyte van Hoytema’s  stunning cinematography.  If Zimmer and Hoytema don’t receive Academy Award nominations, it will be a cinematic travesty.

Jonathan and Christopher Nolan’s script impresses in that not only does it create memorable and interesting characters, there’s plenty of social commentary and hard science.  It presents an interesting dichotomy in that Nolan touches on the disconcerting anti-science movement prevalent in America, while also simultaneously using respected scientific theory.  Two scenes in particular stick out.  The first is when Cooper confronts Murph’s school about her “antics” at school.  Murph had the audacity to talk about the moon-landing, which schools now teach was faked to bankrupt the Soviet Union.  Man did I see red when I saw that scene.  Additionally when the team discusses relativity, it’s understandable and actually fascinating.  Yet neither the social commentary or the science comes off as heavy-handed.  It’s my sincere hope that not only will this film lead to other hard science fiction films being made (***cough cough***Rendezvous with Rama ***cough cough***) but inspire children to pursue science.  A film that inspires?  What a novel concept!  I’m looking at you Meet the Spartans.

A director is only as good as his actors, and once again Nolan’s gathered a veritable all-star team.  Mackenzie Foy impresses as the young Murph, showing a range virtually unheard of from a fourteen year old.  She held her own in every scene with Oscar winner McConaughey, and I’m excited about her future acting endeavors.  Hathaway brings an aloofness and cold determination to her character that’s a surprising turn for her.  One might say she’s too cold until a monologue about love later in the film reveals her true inner character.  A speech that might have come off sappy in another actress’ hands, comes off heartfelt and inspiring through Hathaway.  Oscar nominee Jessica Chastain also intrigues as the older version of Murph, a scientist desperately trying to find the equations to save the human race. She’s focused on her goal but also bitterly resents her father leaving his family.   McConaughey continues his streak of dynamite roles with Interstellar.  His Cooper is a conflicted man.  He’s given an impossible choice:  his family or the entire human race.  It’s hard for him to reconcile the two, along with his ultimate desire to be a pilot.  Nolan’s previously been criticized for a lack of humanity and emotion in his films.  After McConaughey’s performance you can’t say that anymore.  There’s a scene where Cooper watches video messages from his children that absolutely ripped my heart out.  The scene was much more emotional for a reason I won’t reveal.

While I’m sure Interstellar will garner its share of award nominations, I hardly think that’s relevant.  Whether or not the movie wins anything come Oscar time, I believe Interstellar will go down as a truly monumental and groundbreaking film that will stand the test of time.  In fact I saw it with a friend who is an extremely harsh critic of movies.  Upon leaving the theater he declared Interstellar to be his  second favorite film of all time.  That’s how much of an impact this movie had on him.  Great movies are often revered but truly great films sometimes have the power to inspire, to make you see the world and your fellow-man in a different way, and perhaps even change the course of your life.

Interstellar is one of those films.