‘Shadow of Mordor’ – One Trick Pony?

So Shadow of Mordor is a game set in the ‘Lord of the Rings’ fictional universe. It came out in 2014 and received many accolades and rank on more than a couple of Best of Year lists. I played it, and recently finished it, and by the end of the game I was left with one question…

Whilst not a bad game by any stretch one has to question whether it’s being overrated. Specifically if the ‘Nemesis’ system that adds flair to the enemy AI through much of the game has overshadowed what is otherwise a generic actioner.

Ok, let’s wind back to the beginning. After a cinematic sequence of a bunch of people we have no emotional connection with get murdered our hero gets all sad and dead about it. Right off the bat we have weak storytelling, as the main character is defined by an on-screen tragedy that we have no context with. It’s like the game is holding up a sign reading ‘you feel sad and stuff now’ instead of making us feel it. Then we’re steering around the hero – brown haired white male moody tough guy #758349. It would be quicker to write his name but I honestly don’t remember it. Started with a ‘T’. 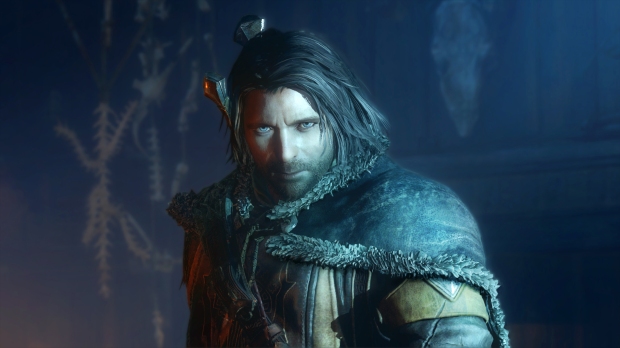 There was a ghost guy that seemed stuck to brown haired guy, but at the outset I had no idea what was going on. That’s fine, it all came together nicely with the help of some text appendices and previous LOTR knowledge. And there were orcs to murder, so I drew one of the swords brown hair was lugging around and jumped into it. One thing became immediately clear. However designed the combat mechanics was a big fan of the Batman Arkham series. Also a fan of straight up copying things as all the combos and special moves had the exact same controller mapping as the Arkham games. It isn’t an ‘influenced’ or ‘inspired’ by thing here, it’s straight up copied.

Navigating the map seemed familiar as well. Jumping around buildings and ruins and whatnot will be instantly familiar to anyone who has played any of the Assassin’s Creed games as it it lifted straight out of that franchise. The difference here is that there’s less historical cities and famous buildings to get around and more open spaces of black and brown land to get across. You have the option of hopping onto the warg thing to speed the journey up but when you factor in having to be physically above the monster and then work through a quick-time event it often seems easier to run your stupid ass all the way there. Another thing worth noting is that in the modern market the AC parkour mechanic feels pretty sluggish, and you will get stuck on furniture and random rocks just as frequently. 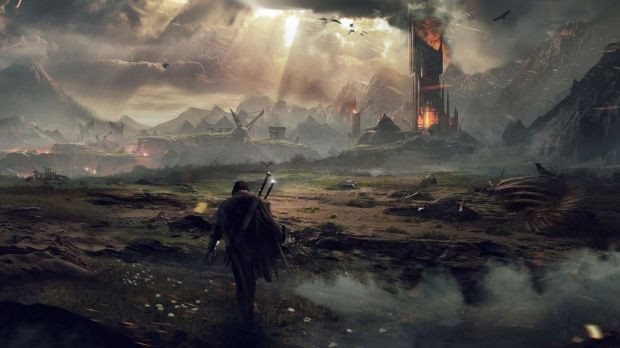 So we have some of the mechanics from Arkham and some from Creed but with one major difference. It’s been dumbed down. If you hit an overhead barrier while climbing in Creed you have to find another route to the top. In SoM the game will helpfully move whatshisname across until he has a way up. The combat is even easier for the player, with upgrades constantly reducing the number of hits to make a combo AND counting one hit as three in the combo count. You go from being able to execute an enemy after landing an eight hit combo to two.

I’ll give the game one solid point, in that the story did draw me in eventually. The idea of being haunted by the wraith who forged the rings of power is an interesting one, and it’s paced out well throughout the game. It’s a good thing I didn’t see the launch trailer though because the whole thing gets the cliff notes version in an hour and half. I really satisfying wrap up could have left a great impression but…well, let’s talk about the finale…spoilers, obviously…

After fighting your way all the way across Mordor and then back again you fight the Black Hand. This comes After taking about his generals. The Hammer of Sauron is a good combat challenge, but the Tower – a scary looking motherfucker indeed who spends about ten minutes giving you a speech about how much he’s going to kill you – is dispatched after sneaky up behind him a couple of times. With that done you have to massacre your way through all the War Chiefs to climb the Black Gate and fight the Hand of Sauron. After eventually getting there the Hand promptly…kills himself without a fight. So Sauron turns up. The biggest bad of them all and after some non-challenging quick time events he goes away.

Well, that as massively anti-climatic.

The hero stands looking over the land and talks with his ghost about finally being able to see his dead family again. At least we have an emotional resolution…until he murmurs something about the fight not being over. To be continued? 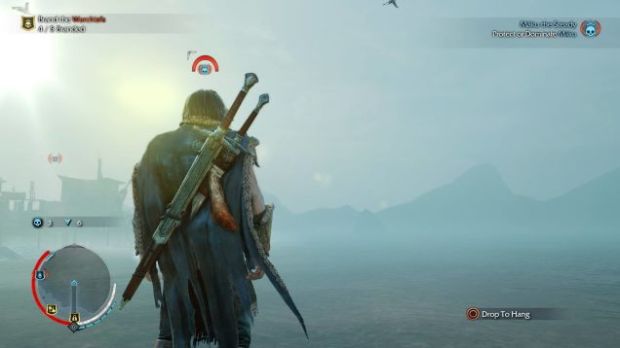 It’s a mark of a really great game that as soon as the credits roll you have to start over, or go back for 100% completion. Between an unsatisfying story and boring final battle that is not the case here. All the support cast are as interesting as the rocks you get stuck on running around and all drop conveniently out of the story after a side mission or two. One aspect of the story that I thought was going to lead to an awesome twist that was being built up to throughout the game didn’t pan out.

Seriously, check this out – in the second half of the game you attain the power to brainwash the orcs. This is awesome, but you’re given the power by an old lady who is clearly under thrall of Saruman the White. Considering that your brainwashed orcs wind up with a glowing white handprint on their face I assumed that you were being manipulated into building an army for the evil wizard. A clever twist that reveals you are nothing more than another cog in Sauron’s grand plan but it never happens! All the elements were there, and it went nowhere!

Your cleft lip is healed!

The selling point that everyone talks about is the enemy army hierarchy. There’s War Chiefs at the top and captains of various standing who all fight amongst themselves to climb the career ladder. When going after a tough Chief you can find out who his entourage is and bump them off first, and shake them down for information about your target. When someone gets killed another with take their place, and if someone kills you they move up the ranks. You will develop real hatred for a couple who cause you grieve and take particular relish in bumping them down a notch. Brainwashing an orc and getting him in a Chief’s good books only to turn the tables on him while you lurk in the shadows is consistently hilarious. At the end of the game you’ll face your greatest nemesis, backed by the brainwashed War Chiefs and captains.

I had, of course, been working on brainwashing the entire continent by the time I got to the final punch up, so it was easier than expected. 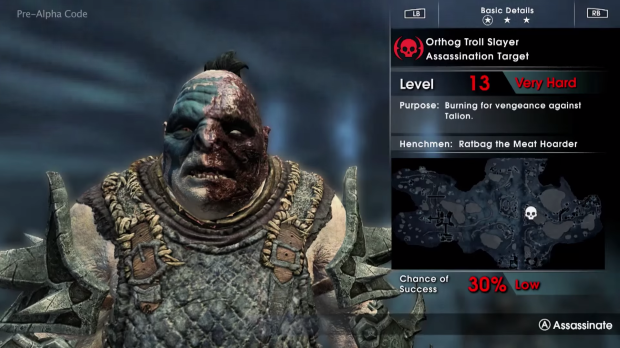 While this is a fantastic system and remarkably well implemented the foundations that hold it up are flimsy to say the least. Basic versions of mechanics from better games get crowbarred in and the story and characters are bland without satisfaction. It’s hard to see it having much entertainment beyond a single play through.

So why is it getting all the big gongs? I don’t know…was it an especially slow year for gaming? Did Alien Isolation get left out as punishment for Colonial Marines? Good innovation but as a complete experience it is not a market leader.