For horror film lovers, every holiday is cause for something scary. Here are ten films perfect for Valentine’s Day, whether you’re watching them alone or with someone else.

Valentine is about a pre-teen who is rejected and humiliated by the girls at school and comes back as an adult to hunt them down and kill them. This stands above your average slasher film because of the unique kills, interesting reveal, and awesome Valentine motif throughout.

Pontypool is a horror and also a psychological thriller about a deadly virus in Canada. The movie centers around a talk radio host on Valentine’s Day.

Fatal Attraction is the quintessential love gone wrong horror thriller. Or rather, affair gone wrong. This movie will remind you why love and attraction are dangerous things.

While the inserted romance between Mina and Dracula in Coppola’s version of this classic may anger some die-hard fans of the book, it’s hard to deny the romanticism attached to this film both in the plot line but also in the whimsical and beautiful way it’s shot. 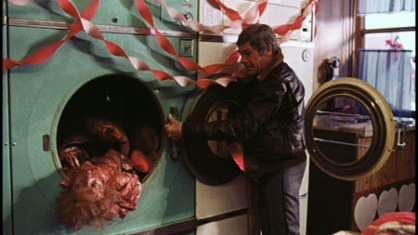 A psycho killer attacks Valentine celebrators. Simple and fun. Some people prefer the 2009 remake but the original is more revolved around the holiday itself. Either way, these films are great for V-Day.

This gritty vampire film is good for Valentine’s Day because of the romance between Caleb and Mae. Many fans will cite this film as what a real vampire romance should look like.

Based on the famous “escaped psycho with a hook for a hand” urban legend, this movie is about a serial killer who attacks couples on Valentine’s Day.

Shaun of the Dead is the classic horror comedy about a regular guy trying to survive a zombie attack and win back his girlfriend. Also, you don’t really need an excuse to watch Shaun of the Dead.

Another romantic vampire film; this one is more sparkle than grit. A young man is seduced into a becoming a vampire and must fight his curse to save himself and the woman he loves.

If you like your romance more sweet and subtle and wrapped up in a story about a young boy and his mysterious vampire friend, then this is the pick for you.