Another Talk About the ‘Game of Thrones’ Rape Controversy

We’ve already posted one article about this topic. I was a bit relieved when Darth Gandalf said he was writing a piece because it felt like it should be addressed but I had no idea what I wanted to say about it. In between DG’s comments and the responses to it, and some conversation with fellow viewers, I think I know what’s bugging me about this controversy.

For a quick recap, we’re talking about the closing scene from the most recent episode ‘Unbowed, Unbent, Unbroken’. Sansa Stark has been forced into a marriage with known sadist and heir to the Warden of the North Ramsey Bolton. Already uncomfortable situation things turned downright sickening with Ramsey taking delight in raping Sansa off screen while we’re left watching Theon Greyjoy’s expression as he is forced to watch this horrid scene play out.

There have been some strongly worded responses to this, with some calls for boycott, and some equally passionate responses. Some have pointed out that it’s not as bad as it was in the book (albeit with different characters), but that’s not going to make anyone feel better about seeing it. It’s also been noted that acts of extreme violence have been seen on the show with tongues ripped out, people burned to death and plenty of torture. Let’s put that argument aside for now, because this controversy is about sexual violence.

I’ve also seen one prominent Australian news outlet suggest that Game of Thrones are reducing rape to entertainment. That sounds like someone jumping on the band wagon without considering the issue, because I doubt anyone was ‘entertained’ by this. The Mary Sue, positioning themselves as the gate keepers of morality in pop culture, took it upon themselves to apologise to readers for not boycotting the show earlier as though they somehow had influence over the program. They also lead the argument that the scene does nothing to advance the plot of develop the characters. How they know this is a great mystery…I’m not aware of them having access to the shows development and find it ridiculous that they or anyone else can claim that there’s no repercussions to these character actions.

There’s still some big ass books to get through.

The Mary Sue, and many others, also claim that Sansa should have been able to get herself out of this situation having already survived others rather than becoming a victim yet again, but I think shows a forced ignorance as to the situation she was in. Could allowing this to happen not be the only course of survival for Sansa? They suggest that she should have pulled out a knife and murdered Ramsey because she’s a proven survivor. Not only would this have been out of character for her, but suicide. She doesn’t trust Theon, thinking he murdered her brothers, and doesn’t have a single ally in Winterfell. I find it unlikely the Bolton’s would have applauded her show of strength and feminism with a free pass considering their tendency to make tents out of their enemies skins (as seen in The World of Ice and Fire).

They like flay’n so much they put it on their damn flag.

These are all arguments that I consider misguided or false. The scene shouldn’t be condemned because it goes against Sansa’a character arc, or because it was just for shock value, or because it deviated from the source material. If you’re offended by the content, I’m not going to try and convince you otherwise. You’re sensibilities are your measure of what you find acceptable and if you don’t want to see it, that’s fine, but claiming it’s something it’s not isn’t going to get us everywhere.

One thing does confuse me though – why this scene. This is not the first instance of sexual violence in the show. Daenerys was repeatedly raped by Khal Drogo in the first episodes of the series. Theon was sexually tortured and ultimately castrated. Ramsey sends dogs to hunt down women and has them flayed for his apparent sexual enjoyment. Brienne was almost gang raped before greed was used to distract her attackers. Many background and side characters have been subjected to sexual attacks and disgrace. The only thing that’s comes close to attracting this kind of attention is when Cersei was raped by her brother Jamie next to the corpse of their dead son. Some have said that they’ve found these scenes more upsetting, with others pointing out that what we’ve seen Ramsey doing to women prior to this scene was far worse.

So…why now? Why did the Mary Sue give Cersei’s rape a pass but spit the dummy at Sansa’s? 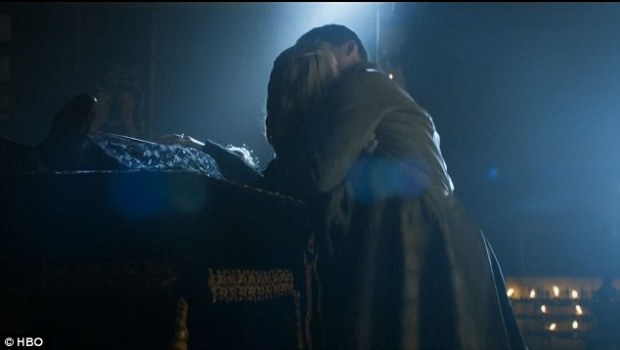 Because this was seriously messed up.

One could chalk it up to rape and sexual assault being a hot topic right now. That’s not untrue, but it doesn’t explain the discrepancy in the response. Some would claim that Sansa has been reduced to victim status for shock value, but as it was noted before we don’t know how this scene fits into the rest of the story.

I’m going to suggest another potential reason and it’s going to piss people off. It’s possible that people have taken offence to this scene because of the characters involved. Could it be that Sansa is, on some level, perceived to be more innocent than the other victims of sexual assault? Daenerys was less established at the beginning of the series and there was less emotional attachment to the character, and by the time we’d come to that point she had taken control of her destiny. Theon had committed unspeakable acts and betrayed his adopted family. Cersei has long been cast as a villain in the series, bringing Joffrey to the throne and warring against fan favourite characters Tyrion, Margaery and Sansa. Is there a part of viewers who, somewhere in the back of their mind, think Cersei deserved what she got whilst Sansa didn’t? I’m not saying people were cheering and toasting the rape of Cersei, we’re not monsters, but perhaps they subconsciously catalogue Sansa as more of an undeserving victim.

Life has sucked for her enough.

It’s likely that such an accusation is going to earn me some negative responses. That’s fair. But it’s worth considering because there has been a much stronger response this time around and there’s not a clear reason why. It’s one more event on top of the previous, but how is women being hunted and dismembered for fun not given column inches and this breaking the internet?

I’m going to throw another idea out there for those who haven’t stopped reading in disgust – what is the purpose of Game of Thrones? At the very basic level, it’s here for entertainment, and if the quality of entertainment is measured in the size of it’s following, then Game of Thrones is the bloody king. With that established we need to consider what has made it so big, especially for a genre show that does not typically bring in the mainstream crowd. Excellent writing, casting, performances and the scale of the show go some way to explain it, but another part of the reason is that it challenges us.

The actions of the characters, the sudden deaths and the ambiguity of what is right and wrong plays heavily into the shows popularity. The most memorable moments are those that challenged us, the viewers. Who can forget the shock at the execution of Eddard Stark, who up until that point had been portrayed as the hero of the series? We thought we were familiar with the tropes – he’s the good person in the world of darkness who maintains his values in the face of adversity and wins the day. Then he got beheaded. His son rose an army and went for revenge, and that ended in the now infamous Red Wedding.

Game of Thrones has set out to challenge us. It pushes boundaries of what we expect and what we can accept, and even what is right and what is wrong. The rape of Sansa Stark fits into this concept, and can even be seen as an escalation. As the story continues the stakes are raised and the consequences become harsher. For some viewers this continuous pushing of our sensibilities and values is eventually going to be to much. With the brutal sexual assault of a well established and highly sympathetic character, who had already survived much unscathed, some viewers will be willing to tune out. That’s fine. If this isn’t your cup of tea then no-one will force you to drink it.

The scene makes sense in context of the story and fictional world, and for the characters involved. Claiming that it’s anything else is erroneous. It’s also an established part of the show, one could argue that it’s not the worst depiction of sexual violence the show has presented (the sexual torture of Theon and Ramsey’s hunting activities, for example). Turning it into another argument about depiction of women or rape culture sounds like some commentators are looking for ammunition for their set argument.

Now this image is somewhat counter to a point made before, but I’m stuck for final statement and it made me chuckle.