Movie Review: Why ‘The DUFF’ Does Everything Wrong

Whenever we wanted to point out everything about teen/high school movies that are stupid we looked to She’s All That. It was full of cringe. It’s begun to fade from the collective consciousness, being well and truly dated. Even the parody Not Another Teen Movie has begun to be forgotten, which is a shame, because… 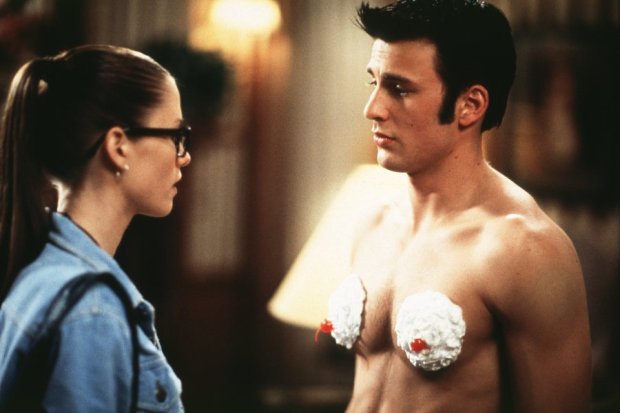 Fortunately we have The DUFF, which does every dumb thing She’s All That did for a new generation. It’s like the opposite of Mean Girls, which is about to become the source for some comparisons.

They Treat High School As a Be-All, End-All of Life

When you’re in high school, it’s hard to imagine live without it. You see the same people every day, occupy the same location…it become the nexus of your social life. But it does end. And you have a life outside of it. Especially in the era of instant digital communication, where a student’s social reach can extend beyond the gates of a school until the teacher notices that they’re using their phone under the desk (BTW, we do notice when you’re doing that). Movies like The Duff treat the high school years as an enclosed biodome where everything happens, and the only acknowledgement of a life outside or beyond school is noting a character is a ‘future reality TV star’.

While The DUFF treats high school as the only thing in the world, Mean Girls does acknowledge in the final act that everyone eventually grows up and gets over it, making way for the next generation to fill their empty shoes. Most of the movie actually takes place outside of school, and they see their teacher during her normal life. 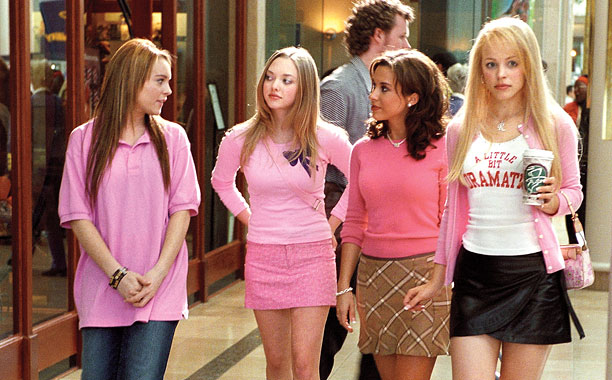 Remember that line from Mean Girls? Everyone has known someone who has tried to make a slang term take off, often to dismal results. It’s one of the funniest running jokes in the movie. It can also be seen as poking fun at teen movies trying to coin new phrases.

The title of The DUFF is in itself trying to coin a new phrase. The centre of its marketing is explaining what it means. Apparently a ‘DUFF’ is a ‘Designated Ugly Fat Friend’, the unattractive friend of attractive people who inadvertently act as a buffer for people who want to date the attractive ones. This is not a thing that happens. For starters, teenagers are not so preoccupied with relationships and social hierarchies that they have ‘designated’ roles of any kind. Also people are not inherently cruel and have a friend whose only purpose is to act as an unwitting agent.

So which one of these friends is the ‘fat and ugly’ one?

No, for real, try and answer that question. One of these characters is the ‘designated ugly, fat friend’. Tell me which one you think is the ‘fat and ugly’ one. Hollywood and the networks have a very funny idea about what constitutes fat and ugly. It’s not so weird that the cast of a movie is on average better looking than the people you see on the street. They’re professional actors and their looks factor into their success. But with shows like Ugly Betty and the like there’s a trend where being ‘fat and ugly’ amounts to wearing a baggy jacket.

Let’s look at the actor they chose to play the ‘fat and ugly’ one.

How is Mae Whitman ugly and/or fat? This is an attractive person. This is one man’s opinion, but I think she’s more attractive than the two ‘attractive’ friends.

The World is Cliques

Let’s get back to the idea of social hierarchy. The DUFF seems to feel that a stringent social structure exists in schools, with popular jock and fashionable people at the top while everyone else strives to be acknowledged by those at the top. Mean Girls has a bunch of cliques in their school, but you never see the geeks and goths trying to get ‘promoted’ up the chain or do the popular kids favours in exchange for being ‘talked to in public’. In reality geeks don’t strive to be accepted by the jocks because they don’t care about sports, they care about geeky things.

The only movie that shows high school as a regimented social hierarchy on par with a fictional dystopian prison yard like The DUFF is that old shitty one The New Guy, where the school had a hill in the middle where the popular kids sit at the top and the rest descend in order of popularity. 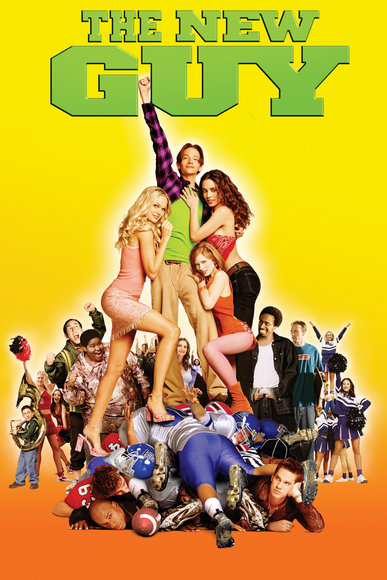 It’s as shitty as you think it is.

…And Here’s a New Way to Single People Out

Bullying happens in schools. It’s pretty shitty, but it also seems to be inherent in human communities. That’s not an excuse, just an acknowledgement that it happens. It’s considered the most highly satisfying part of the teen/high school movie when the bully gets karmaed. Especially in Dazed and Confused because you can pretend it’s Ben Affleck’s pre-emptive punishment for the early 2000s.

The DUFF seems to go the opposite way. Rather than show the bullies get humiliated or, in the case of Mean Girls, run down with a bus (or straight up murdered if you’re old enough to remember Heathers) this movie gives us a brand new way to make someone feel like crap! The entire premise of The DUFF creates a new ‘role’ that is an insult. If you want to make someone feel like they’re being used by their friends, or are the unattractive one in their group, this movies has coined a new term for it! 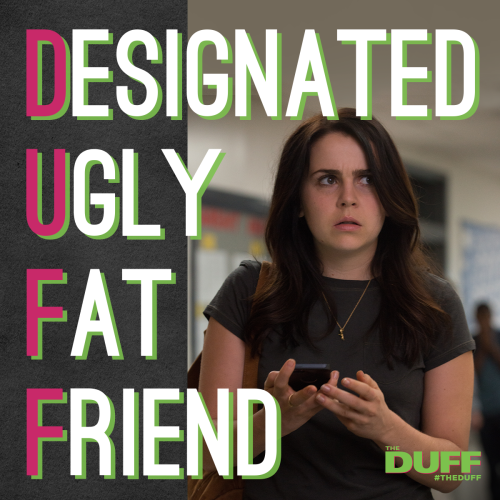 They Portray Teenagers as Stupid

My god, the main character in this movie is unlikable. Mae Whitman is a pretty charming actor already, so this characters has to counteract that base level of likability before becoming unlikeable themselves. Whitman’s character has been friends with the two ‘attractive’ girls (pretty forgettable themselves) her whole life, seen in old photos. Yet when one person explains to her that she’s a ‘DUFF’, she takes this label to heart and immediately ditches her friends. Every decision she makes from that point on is pretty much on par with that stupidity and pointlessness.

There’s a reason Mean Girls and, earlier, the works of John Hughes is held in such high regard. They portray teenagers as people, not shallow stereotypes. Even the ones we are supposed to few and the good, sympathetic ones are shockingly shallow and quite thick. Teenagers can be naive, confused or make basic, human mistakes – but this movie doesn’t give them that level of complexity. Compare this to something like The Breakfast Club or Some Kind of Wonderful. It’s kind of insulting. 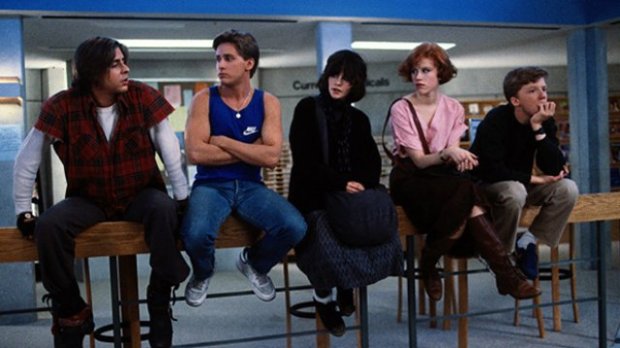 …Or Maybe it’s The Film-Makers…

It’s possible that the film-makers aren’t capable of creating characters more complex than a piece of card. The only time I genuinely laughed during the movie was when the term ‘viral’ was used. On two occasions during the film some characters found something on the internet they wished to forward to their friends. Then this exchange takes place:

Um, that’s not how that word gets used. I don’t know if this is a scriptwriter trying to sound hip and up to date, or an attempt to put a new spin on the phrase, but it comes across as a desperate attempt to stay current with teen culture. It makes the director sound like he’s 40 years old.

Actually, I went to check that…

Your Life Does Not Peak with Prom

Of all the cliches in teen movie this is the one that irks me the most. A ridiculous amount of money gets sunk into these events every year, and schools have started trying to temper expectations in advance. Money aside, the prom is portrayed as the most significant moment in a young persons life. Relationships will be made or broken. Friendships with be sustained or deteriorate. Teenagers the world over will have coming-of-age epiphanies and become the person they were destined to be.

The reality? You get dressed up and have a fun night out with your friends. If you start treating it as anything more than that you’re setting yourself up for disappointment.

The prom scene from She’s All That is still one of the most unintentionally hilarious scenes in cinema. Please not that this is NOT the parody version. They later added Usher shouting instructions because test audiences didn’t know why everyone in the school had perfected a choreographed dance routine.

Final Thoughts on the Film

This isn’t a terrible film, but it is bland, formulaic and pointless. See it if you literally haven’t seen any teen/high school movie before and it might be fun, other it’s totally forgettable. Or you can just watch something better like Bring It On.

3 thoughts on “Movie Review: Why ‘The DUFF’ Does Everything Wrong”