Timey Wimey Talk: ‘Doctor Who’ Series 9 Episode 3 “Under the Lake”

After the first two episodes of Series 9 rocked out like The Doctor playing “Stairway to Heaven,” a drop off was inevitable.  That’s not to say that the latest episode of Doctor Who, “Under the Lake,” is a poor episode.  Not by any means.  To use a baseball analogy, while the opening two episodes were home runs, this one is a double.

We start out in Capaldi’s stomping grounds, Caithness, Scotland in the early 22nd century at an underwater oil mining facility called The Drum.   After discovering a mysterious craft in the lake that appears to be of alien origin, the crew brings the vessel aboard only to find it’s haunted.  Moreover it’s haunted by a poltergeist who proceeds to kill the Captain.  Worse still, said Captain becomes a ghost himself and the crew’s only solace is in a Faraday cage that blocks radio transmissions.

What’s fascinating is how The Doctor actually turns up in this situation.  Long time fans of Doctor Who know that the T.A.R.D.I.S is a living thing and sometimes doesn’t take The Doctor to where he wants to go but rather where he needs to go.   Such is the case here.  In fact The Doctor even comments that the T.A.R.D.I.S is clearly upset.  So much so that her translation process doesn’t seem to be working.  First impressions indicated to me that the T.A.R.D.I.S  was disturbed by the appearance of real ghosts which she considers an aberration.  For a creature/machine based concretely in science, this is a disturbing revelation.  Not so much for The Doctor however, who seems to be excited about the process.  His reaction is surprising considering it’s always been implied (although never explicitly stated) that The Doctor doesn’t believe in an afterlife.  Yet in this instance his sense of adventure overpowers his skepticism.  As it should. 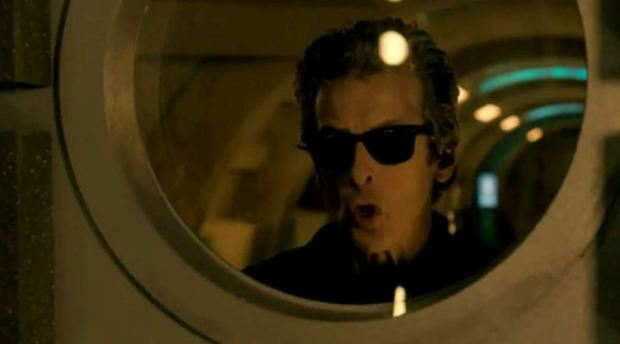 Clara’s sense of adventure is severely heightened as well.  I know there’s a lot of hate for Jenna Coleman as a companion, but this is maybe the first time we’ve seen her really enthusiastic to go on adventures, something that’s usually present in all companions.  Yet The Doctor sees through her facade (?) implying she’s addicted to the adventure and maybe should get over Danny and get a new boyfriend.  That was an extremely tense moment as it’s about the closest the two have come to discussing Danny’s death.  It’s clear that it’s a topic Clara still has no interest in addressing.

The humor in this episode is nothing short of brilliant.  Two of my favorite lines were, “Who’s in charge?  I need to know who to ignore!” and “It’s ok.  I understand.  You’re an idiot.”  The bluntness of Capaldi is just awesome.  And The Doctor using note cards to express sympathy?  Genius.

One of the things I love about The Doctor is his uncanny ability for deduction.  It’s on par with Sherlock Holmes.  After all he’s the one who picks up on the missing power cell and the missing suspended animation chamber.  He questions what exactly the ghosts are, what do they want, why can they only come out at night, and what exactly it is they are saying.  Isolating the ghosts in the Faraday cage seems to be the best course of action and using the crew as live bait while cool, was a little cliché.  In fact I was reminded of a similar scene in Alien 3.  Although to use the Sonic Sunglasses to create a hologram of Clara was a nice touch I must admit.

The words the ghosts are saying are truly disturbing–The Dark (space), The Sword (Constellation Orion), The Forsaken (the lost alien), and The Temple (the church where the suspended animation chamber is hidden).   Speaking of the church, how awesome was the virtual reality machine used to navigate the sub that located the church?

The real mystery to me is why killing people would boost a distress signal.  And if the alien ghost is actually dead, why would he need rescue in the first place?  Aside from being separated and looking to save Clara and the crew, I think The Doctor went back in time to get some of those answers.

Unfortunately for fans we’ll have to wait until next week to get those answers.  And with the final shot being The Doctor as a ghost, it’s going to be a looong week. 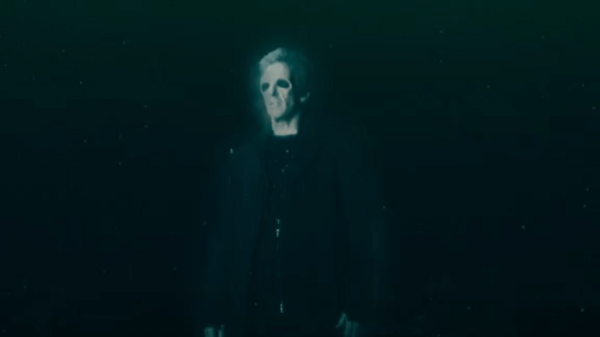 One a scale of  0 to 10 sonic screwdrivers this episode rates an 8.