“The Girl Who Died” begins in one of those classic Doctor Who ways–at the end of another adventure we don’t know about.  Whereas some of the previous episodes in Series 9 have had mild intros, this one hits the T.A.R.D.I.S sprinting.  You’d think that with Clara lost in space with a deadly alien spider ready to suck her brains out and the T.A.R.D.I.S exploding all around The Doctor, the episode would have nowhere to go but down.

But you’d be wrong. Because Vikings.  As much as I adore The Doctor and Clara’s jaunts to the future, it’s always nice to cleanse the palate with a trip to the past.  And who doesn’t like Vikings?  What’s better than Vikings?

How about Maisie Williams from Game of Thrones as a psychic sensitive Viking teenager named Ashildr?  Yup that’ll work.  I mean how else would you combat a warrior alien race with a leader who looks like Odin?  And who’s also turning the best warriors of the village into testosterone Slurpees?  Did I mention this is a Doctor Who episode?

To touch on Williams’ character I was glad to see that she wasn’t simply rehashing Arya from Game of Thrones.  There was a vulnerability to Ashildr that Arya doesn’t have.  Ashildr for whatever reason truly believes that a lot of the bad things that happen in her village are her fault.  Yet there are shades of Arya, especially when she stands up to Odin of the Mire alien race.  Williams’ called him out LIKE A BOSS.

Unfortunately the man in charge, The Doctor, is less than enthusiastic about the prospect of saving the village.  He’s worried about beating the Mire and subsequently they return in greater force–perhaps to wipe out all of humanity.  This relates back to something The Doctor says to Clara at the beginning of the episode.  “We’re time travelers.  We tread softly.  It’s ok to make ripples but not tidal waves.”  Yet as Clara points out The Doctor himself is a tidal wave.  She essentially tells him to Time Lord up and figure a way to save the people of the village.

Which of course he does.

After training various villagers in the art of swordplay  (Vikings he hilariously dubs ZZ Top, Chuckles, and Lofty) goes horribly awry, his ability to speak baby leads him to a supply of electric eels which The Doctor and the villagers take full advantage of.  Using the eels to electrocute the Mire and also as weaponized magnets? Genius.  Granted barrels full of electric eels in a Viking village is somewhat odd and convenient but hey it’s Doctor Who.

One of the literally hundreds of things I love about Doctor Who is it’s ability to tie into modern day current events in spite of whatever wacky circumstances transpire.  The idea of doing a public shaming of the Mire on the Galactic Internet, a warrior race who survives on their reputation, is no different from the “Epic Fail” videos you see on YouTube.  And it’s just as effective.  Also I just about fell out of my chair when Clara put the Mire’s ineptitude to the theme song of the Benny Hill show.

Unfortunately, every battle has its casualties.  When Ashildr uses her psychic abilities, with the help of a Mire helmet, to trick Odin and his followers, she drains herself like a battery.  Something The Doctor suspected, perhaps even knew would happen.

Her death leads into a discussion with Clara about a topic The Doctor is very familiar with–losing people  Ashildr’s death just reminds him that one day he’s going to lose Clara and he’s going to do the same thing he always does–get in his blue box and run away from the pain.  The Doctor is forever like Sisyphus, constantly rolling the boulder up the hill only to have it come tumbling down again and himself alone.

Yet in our darkest hours sometimes comes our greatest insights.  Such was the case for The Doctor in this instance.  It’s finally revealed that the reason he wears the face of Caecillus, the person he saved from the Pompeii episode when Donna was his companion, is to remind him that he CAN be a tidal wave.  Even though he wasn’t supposed to interfere with the destruction of Pompeii, he did anyway.  (Finally we get an explanation for the face!)  The Doctor does the same thing here by saving Ashildr with a piece of technology from the Mire’s medical kit.

Yet seemingly righteous decisions made in a moment of emotional distress can often appear disastrous in hindsight.  The Doctor realizes too late that he’s probably made Ashildr functionally immortal.

The real question for next week is: How does the blessing (curse?) of immortality change a person who isn’t a Time Lord? 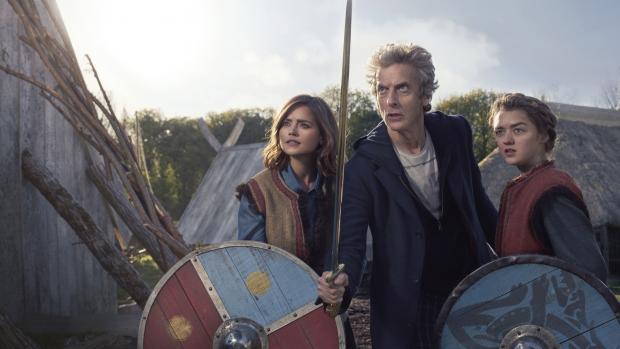