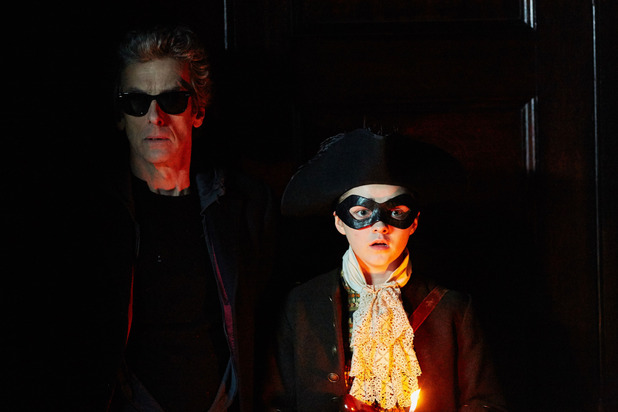 Occasionally in Doctor Who there’s an episode (not counting the Christmas specials) where the Companion is either absent or shows up towards the end of the show.  Such is the case with “The Woman Who Lived,” as Clara remains noticeably missing until the tail end of the episode.  I’m sure the Clara haters were pleased about that.  (I’m not in that camp.)

“The Woman Who Lived” probably won’t assuage the Clara haters feelings because Maisie Williams absolutely knocks it out of the park with this episode.  She showed a range, a depth, and a pathos that convinced me she’s more than just Arya Stark.  I have no doubt that once her run on Game of Thrones has passed she will continue to succeed as an actress.  I desperately feel like she should be the next Companion, although through remarks in the episode and also her commitments to Game of Thrones, it’s doubtful that it will happen.

From the outset when The Doctor searches for an alien artifact and inadvertently stumbles upon Ashildr, it’s clear she’s a changed woman.  In fact she’s not even going by Ashildr anymore but by Lady Me and her alias the Knightmare, a highwayman.  Having lived 800 years already, Ashildr has become callous and cold, she doesn’t even remember half her life.  There’s an arrogance and boredom that wasn’t there before.  Robbing people appears to be just for sport, as Williams’ character is rich beyond belief.  Ashildr has certainly lived an amazing life, experiencing everything from a stint as a medieval queen, to ending the 100 Years War.  However, much like The Doctor himself, Ashildr has experienced incredible pain and loss, including her own children, to the Black Death.

What connects The Doctor and Ashildr and makes for a dynamic and fascinating episode, is the fact that both have lived so long.  They understand each other from that point of view.  Ashildr knows The Doctor’s pattern of gaining Companions, losing Companions, and then running away, without The Doctor even telling her.  Yet in spite of that, Lady Me desperately wants to be The Doctor’s Companion, she wants something new and different.

Unfortunately it’s The Doctor’s outright rejection of Ashildr’s request that prompts her to turn to a different avenue of escape, namely a cat alien named Leandro who’s trying to get back to his people.  The only way to do so is to use The Eye of Hades, a jewel that’s actually a space gateway.  The only catch is that it needs a death in order to function.  Leandro promises to take Lady Me with her if she obtains it.  I believe that deep down Ashildr had to know Leandro was lying.  Yet she’s so desperate for something different that even the prospect of death doesn’t bother her.  In fact it seems to be a welcome option.  After 800 years of losing everyone you love around you, I can’t say that I blame her.

And of course Leandro is lying.  No alien on Doctor Who looks that evil and is telling the truth.

Yet Leandro’s betrayal is something that turns out to be necessary.  The possibility of Sam Swift’s death (who by the way is hysterical) and the further prospect of Earth’s demise, triggers something in Lady Me.

SHE ACTUALLY BEGINS TO CARE AGAIN.

It’s like The Doctor says, “You don’t care and then you fall off the wagon.”  That’s The Doctor to a T.  He loses a Companion, runs off, gets jaded, pretends not to care about people, and then finds another Companion.  It’s a vicious but predictable cycle that all fans of Doctor Who have come to love and hate at the same time.

As a consequence of Williams’ character restoring her “well of human kindness,” she ultimately saves the town by giving Sam Swift the second alien chip.  He may or may not be immortal now.  I kind of hope he is because I want his character to pop up again.  At the same time however, I’d hate to see him undergo what Ashildr has.

I mentioned earlier that I wish Ashildr and The Doctor could be Companions but I get why they can’t.  As The Doctor says, “Our perspectives are too vast.”  The reason The Doctor has human companions in the first place is to remind him how fleeting and precious life can be.  He wouldn’t get that with Ashildr, and in fact they might make each other worse.  A terrifying prospect.  (Side note:  How about the shout out to Captain Jack Harkness?  Sweet!)

Since Ashildr knows The Doctor’s pattern, she also knows that his Companions will be left behind.  As such she volunteers to watch out for them when he’s not there.  It’s kind of odd that she’d volunteer to be a caretaker for them.  But then again I guess it would be like having a surrogate Doctor.  It’s also a little creepy and makes me understand why The Doctor feels he has to keep an eye on her.  I say creepy because I don’t know about you guys, but I found it really disturbing when Ashildr showed up in the selfie at the end of the show rather than reassuring.

However, the selfie does reassure me that Williams’ character will be showing up again.

As for next week, in honor of Maisie Williams, and to misquote House Stark:

One thought on “Timey Wimey Talk: ‘Doctor Who’ Series 9 Episode 6 “The Woman Who Lived””