Reviewing the Scary Movies that Traumatised My Childhood (Part 4)

The more I think about it, the more horrifying experiences I had watching movies as a child. It’s time to dig into the subconscious lurking horrors and revisit the past once more.

If you missed the start of the series you can catch up on An American Werewolf in London – Return to Oz, A Nightmare on Elm Street – The Adventures of Ichabod Crane and Mister Toad and Jaws – The Secret of NIMH in our previous entries.

The Trauma: I distinctly remember this one. I was 7, waiting to leave for school and some shitty morning show was one. There’s few things more pathetic than Australian morning talk shows. They try so gosh darn hard to be relevant and witty. Anyway, they were plugging this new horror comedy and showed a clip. I remember a woman in a phone booth. She was panicked and trying to call for help while a giant pink mass surrounds her. Next thing we know there’s a mutilated face pressed up against the glass.

Cut back to hosts of the show chuckling over the clip and my mother on the phone complaining to the network. Now I’m not one for sugar coating the world for children but fuck those guys for showing that clip at 8:00am in the morning at the same time as cartoons.

The Review: Unlike the other films in this series, I hadn’t seen this one in the interim. Possibly because this one clip SCARED THE SHIT out of me at age seven. So I grabbed a copy and sat down for some Halloween viewing. Not knowing what to expect, I found the movie to be entertaining and the right amount of silly and holy crap is that Johnny Drama?!?!

Ok, this movie is a masterpiece. Just for that. It’s amazing. The story tells of an alien blob type creature that crashes to Earth and grows larger and more dangerous by absorbing people. It rampages around small town America taking out the stereotypical redneck cop, rebel teen (above), cheerleader, football jock, etc, etc. The story is by the numbers but done with a knowing wink to camera, riffing on the horror movie formula years before Scream post-modernised everything. It all ties into a conspiracy theory plot that adds a nice twist to the story.

Much of the movie is build around set piece monster attacks. Some of the effects have held up well and some…have not. The movie doesn’t have a lot of budget on show as it is. Fortunately the film-makers compensate for this with imaginative use of the blob monster. It bursts out of drains and climbs inside radiation suits. It walks the line between gruesome and funny to good effect. It’s a fun, cheesy movie and worth checking out while drunk.

The Trauma: So the plan was to go and see The Land Before Time (that’s a whole different type of traumatic) but we missed the freeway exit. We drove on to the next one with a cinema and saw this instead. It was all well and good. The blending of live action and animation was mesmerising to a 7 year old. Then Judge Doom showed up. He wasn’t that bad. Then he broke out the barrel of dip. 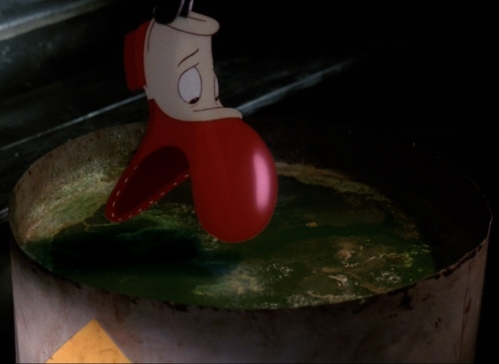 Holy fuck, this scene. What made it worse was how innocent and scared the shoe was. Then there was the red ink that he melted into – which at the time I thought was BLOOD. I couldn’t shake the idea that the other half of the pair was lonely and sad now.

The Review: This movie is fondly remembered and considered a classic, but honestly it doesn’t get enough appreciation. The entire concept is amazingly imaginative, taking an already highly original book adaption and elevating it way behind the source material (by the admission of the original author). Somehow they got both Disney and Warner Brothers on board with using their characters, and agreement the rival companies may never come to again. Mickey Mouse and Bugs Bunny on screen together? This is a one off deal. The movie is packed to the gills with cameos going all the way back to Betty Boop being voiced by Mae Questel, who first voiced the character in 1931. 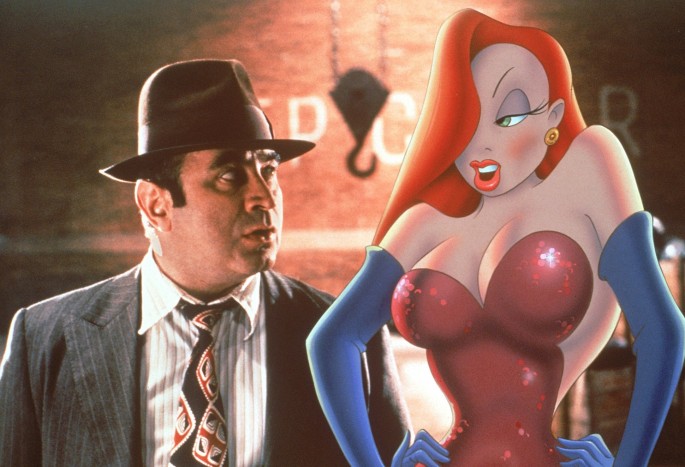 Then we have the historical background to the film. The freeway project was a major turning point for L.A. and often became a plot point for Noir films of the era. Who Framed Roger Rabbit? is one of the best modern Noir films, recreating the mood and characters in a surprisingly family friendly film. Kids will love seeing so many of their favourite characters on screen at one time, adults will enjoy the wry humour (the entire character arc for Jessica Rabbit is brilliant even while being mostly off screen) and film buffs will appreciate the adherence to Noir conventions. Even the twist at the end is a clever one.

And it’s funny. It’s damned funny. The piano duel between Daffy Duck and Donald Duck is one of my favourite movie sequences of all time. For the record, I’m pretty sure I can hear the N word.

Review: TEN out of TEN