Batman and Superman Don’t Kill People….Except When They Do 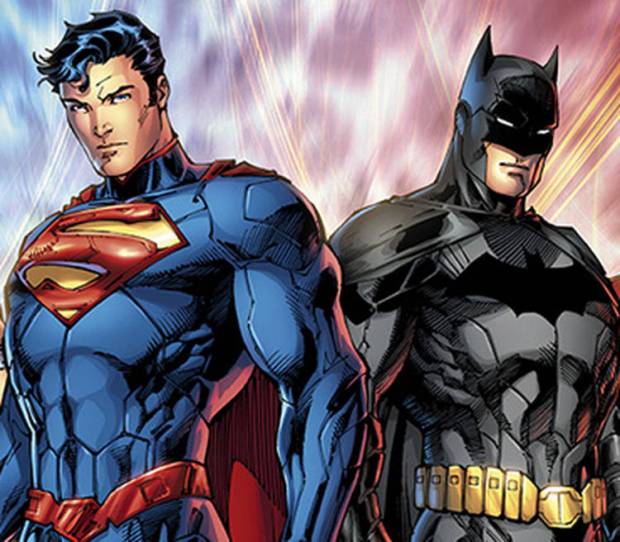 There’s a lot of animosity towards the upcoming Batman V Superman: Dawn of Justice film.  It extends back not just to the casting of Ben Affleck (which I’m glad that bitch-fest has died down, he looks like he’s gonna crush it) but all the way to Man of Steel.  It’s a very polarizing film for fans.  Seems people either love it or hate it.  Personally I’m in the former category. Reasons for the vitriol have run the gamut, from color palette, to acting, to character representation, to story, to too much CGI. Overall, the negative connotations of MOS, DOJ, and other upcoming DCU films appears to partly stem from the fact that it’s not Marvel.

But that’s a debate for another day and another article.

Let’s focus on the point of this article, character traits  and more specifically that Batman and Superman don’t kill.  Also as a corollary for Batman, the notion that he doesn’t use guns.  These statements are generally accepted tenants of both superheroes.  The release of the latest DOJ trailer has once again produced nerd rage regarding Supes and Bats onscreen.  Hardcore DC fans were already pissed that Superman killed Zod in Man of Steel and the vitriol continued when shots showed Batman holding a gun in the latest DOJ trailer.  And lo the outcry was heard from star to star across the nerdverse, “Batman doesn’t use guns and he and Superman don’t kill.”

Except they have actually.  Plenty of times.  When you say?  I’m glad you asked.  Let’s start with Batman: 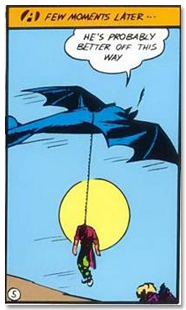 Batman’s lust for blood (relax I’m being hyperbolic) reaches back as far as Batman #1 in 1940.  Let me say that again for the people in the back row: THE FIRST GODDAMN ISSUE OF BATMAN.  The debut comic finds the Caped Crusader tracking down a villain who’s experimented on mental patients to create muscled up thugs.  To resolve this issue Batman guns down a truck driver with a rifle.  This causes the truck to crash, killing every criminal in the back.  But that’s not all.  One of the mental patients escapes from the truck.  The Dark Knight decides it’s then a good idea to put a steel noose around the guy’s neck and hang him from the Batplane.  These don’t seem like the actions of guy with a strong moral compass.

At this point you may be saying, “Darth this was 75 years ago during WWII where people had different views on social issues, there was rampant xenophobia, etc.”  Fair enough.  How about a more recent example. 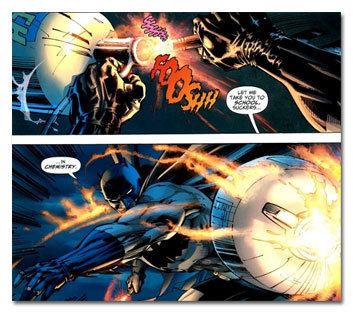 The above image comes courtesy of All-Star Batman and Robin #7 from 2007.  Or as I like to refer to it, “Batman Goes Medieval On Thugs Stealing Bleach And Then Gets Freaky With Black Canary.”  You read that right. BLEACH.  I guess criminals want whiter whites too.  In any case, Bats feels so strongly that these guys have violated the honor of Clorox, that he takes bleach, combines it with thermite, sets it on fire, and throws it at them.  Not surprisingly they all burn to death.  Batman also adds a little flair by pummeling some of the thieves already on fire.  You’d think this is crazy enough but then things get…weird. 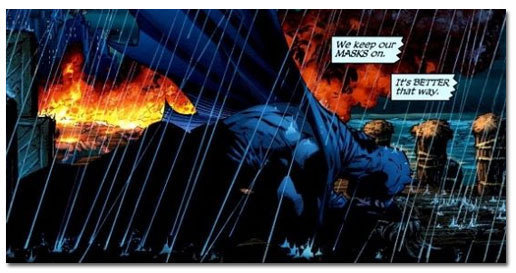 “Hey Canary, you ever see the movie ‘Crash’? No not the one with Sandra Bullock, the 1996 one with James Spader. This is gonna be kind of like that.  Oh by the way the safe phrase is ‘utility belt’.”

So yeah Black Canary shows up to watch this delightful little Boyscout campfire and it turns her on.  Rather than retreat to a Hilton or the Batcave, the two decide to fuck on the cement roof while the bodies of the criminals burn in the background…with their masks still on.  Even Christian Grey was like, “Hey man this is too weird for me.”

Ok so I gave you some comic book examples.  What about a film example?

While I still hold Christopher Nolan’s Batman trilogy as my favorite representation of Batman on-screen, I still love 1989’s Batman.   However,
Tim Burton apparently didn’t get the memo that Batman doesn’t kill as this scene clearly proves.  In a scene just prior to this, Michael Keaton’s Batman tells the Joker he’s going to kill him.  He then puts deed to word and grapples Joker’s leg to a gargoyle statue.  The statue subsequently comes loose and the weight of the statue drags Joker to his death.  Now I guess you can make the claim that Batman merely meant to secure Joker to the statue and the gargoyle coming loose was just an unfortunate event.  To me though that’s just equivocation.  Batman’s intent was to murder the Joker and that’s exactly what he did.

These are just three of the numerous examples of Batman killing over the years.  Others include crushing Mongols with a giant statue and starving a villain named KGBeast to death.  That last villain was sent over to the USA from Soviet Russia to kill everyone involved with the Star Wars program because Reagan and the 1980s.  Regardless facts are facts.  Batman does kill and does use guns on occasion. 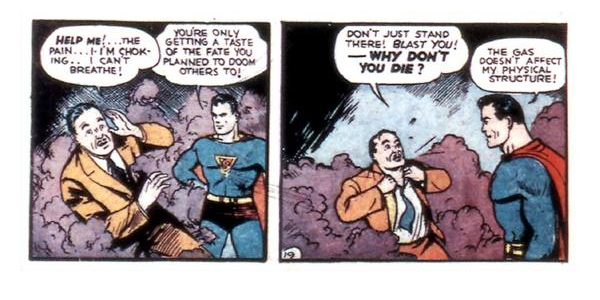 Just like his Justice League partner, Superman killing goes back to the first two issues of the Superman comicbook in 1940.  Not content with throwing a general off a cliff and destroying an army plane, Supes also blows up a munitions factory–all in the first issue.  Not to be outdone the second issue finds the Man of Steel breaking into a villain’s laboratory and killing him with his own poison gas.  As you can see in the panel above he even gloats about the poison not affecting his alien biochemistry.  Not exactly the epitome of the all American hero we’ve been led to believe Superman is. 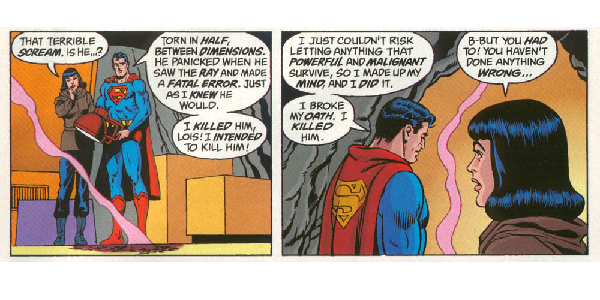 The above comic example isn’t as recent as my All-Star Batman and Robin example (1986 to be precise) but it is more recent than 1940. Comicbook deconstructor extraordinaire Alan Moore took Clark Kent’s alter ego on with the two-part story Whatever Happened to the Man of Tomorrow? In this two-part story Lex Luthor reveals Superman’s true identity to the world.  This results (somehow) in Brainiac and the League of Supervillains murdering Lana Lang and Jimmy Olsen.  When Superman discovers the whole thing was actually orchestrated by longtime Superman villain Mr. Mxyzptlk, Superman concludes the logical reaction is to trap the nefarious man from the fifth dimension in between two dimensions, thus killing him.  This example is actually a twofer, as shortly thereafter, Superman enters the Gold Kryptonite Room in the Fortress of Solitude and commits suicide.  Damn that’s dark.  How about that?  A dark story from Alan Moore.  Who’d have thunk it?

Many fans who rail against the notion that Batman doesn’t kill point to the below example: 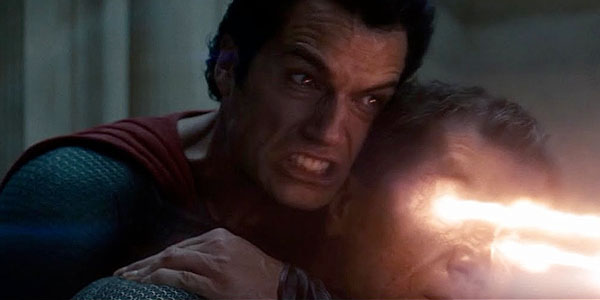 This of course an image from the infamous scene at the end of Man of Steel where, choosing his adopted home and people over his fellow Kryptonians, Henry Cavill kills General Zod in order to save a human family.  Superman fans screamed so loud at this “travesty” they might as well have been at a One Direction concert.

What’s interesting is that those who deride this scene yet love the original films with Christopher Reeve, tend to ignore this scene:

Apparently, people who extol the virtues of the original two films and contend that Superman never kills have more selective memories than Roger Clemens at a congressional hearing on steroid use.  And don’t give me that bullshit about, “Well we never actually see the body.”  I didn’t just fall off  Jor-El’s flying beast Kelex.  Zod’s death is more obvious than Superman’s signature  hair curl.

As with Batman these are just a few instances where Superman kills.  Other examples include Supes killing Imperiex and Brainiac to save the universe, and ripping out the Joker’s heart in an alternate dimension.

Having said all this, I actually believe that for the most part, Batman and Superman follow their code of not killing.  And it’s a good thing.  It’s something that endears them to us.  I think some fans however are using this precept against the DOJ trailer as a way to justify their conclusions that the movie is going to suck.  I’m more concerned about Jesse Eisenberg as Lex Luthor.  Either way how about we wait until the movie actually comes out before we make a judgement.

The problem with the rationale of this precept is that it’s fundamentally flawed.  Both superheroes have killed in the past and there’s plenty of evidence to back this up.

To misquote an old adage, “The proof is in the Kryptonian pudding.” 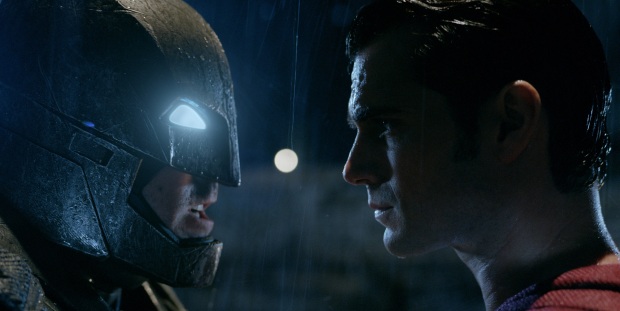 4 thoughts on “Batman and Superman Don’t Kill People….Except When They Do”