Plot:  1870s Wyoming.  Bounty hunter John “The Hangman” Ruth (Kurt Russell) is transporting known murderer and thief Daisy Domergue (Jennifer Jason Leigh) to the town of Red Rock for trial.  Waylaid by a terrible blizzard after picking up fellow bounty hunter Major Marquis Warren (Samuel L. Jackson) and new Red Rock sheriff Chris Mannix (Walton Goggins), the four are forced to hole up at Minnie’s Haberdashery, some several miles outside of Red Rock.  Within they find an eclectic bunch of blizzard companions including haberdashery worker Bob (Demian Bachir), traveling hangman for hire Oswaldo Mobray (Tim Roth), cow puncher Joe Gage (Michael Madsen), and former Confederate General Sanford Smithers (Bruce Dern).  However, it soon becomes readily apparent that not everyone is who they say they are. One or more of these eight may be working with Daisy and the only thing certain is not everyone is making it to Red Rock alive.

Review:  Director Quentin Tarantino’s latest magnum opus, The Hateful Eight, has become a lightning rod of divisiveness ever since it’s release on Christmas Day.  Some are calling it his “worst” film, while others praise it as the pinnacle of his directorial career.  (The quotation marks are intentional. Tarantino, much like Spielberg or Hitchcock, doesn’t make bad films, just films that aren’t as masterful as his others.  We aren’t dealing with Uwe Bol here.)  While The Hateful Eight is by no means Tarantino’s best film, it’s unequivocably another homerun for the vaunted director.  A masterwork of cinematography, The Hateful Eight sports an amazing cast with top-notch performances and some of the best dialogue Tarantino has ever put to paper. It’s truly a remarkable film and one of the best Westerns in the last thirty years.

I think what separates Tarantino from other directors is that he is a true student of film history.  Many have claimed that his films are nothing more than derivative homages to certain genres (Jackie Brown to blaxploitation films, Kill Bill to martial arts movies) and to some extent that’s true. However, there’s an implied accusation in these claims that Tarantino is somehow ripping off or rebooting classic films.  This couldn’t be further from the truth.  Yes, The Hateful Eight is an homage to Spaghetti Westerns complete with copious amounts of blood, large sweeping vistas care of Robert Richardson’s brilliant cinematography, and even a phenomenal original score by legendary composer Ennio Morricone.

However, The Good, The Bad, And The Ugly this movie is not.  It’s all Tarantino.  And for Tarantino it’s all about setting the mood.  Combine a classic Spaghetti Western with an Agatha Christie locked door mystery and a sprinkle of an entrapment film like Saw, and you’ll be close to the mark. It’s a slow burn if there ever was one.  Through the vehicles of a nasty blizzard and the confined space of Minnie’s Haberdashery, Tarantino creates a real sense of claustrophobia and paranoia remnant of John Carpenter’s The Thing. It’s no coincidence that Kurt Russell, the star of The Thing appears in this movie or that Ennio Morricone who scored that film also scores The Hateful Eight. Hell there’s discarded music from The Thing in this movie!  Nobody is who they seem, everyone has an agenda, and trust is rarer than reasonable thinking at a convention for The Flat Earth Society.

Something else that’s scarce in The Hateful Eight are admirable qualities in the eight main characters.  Ruth beats on Domergue at will, Smithers is an overt racist, and Mobray is so dispassionate about the people he hangs to the point of callousness.  In point of fact there’s no real main protagonist to root for.  You’d think that would diminish the film and connection to the characters.  In fact the exact opposite holds true.  The film is intriguing because there’s no main hero/heroine.  Everyone operates in shades of gray although if truth be told, the gray is closer to charcoal than the traditional Crayola crayon.

When it comes to the performances, everyone is at the top of their game in The Hateful Eight.  Great directors, much like great athletes or coaches often bring out the best  in their actors.  You can equate Tarantino to Michael Jordan when it comes to elevating actors’ performances.  This cast has never been better especially Leigh, Jackson, and Goggins.  Leigh certainly earns the Oscar nomination she just received, Goggins steals every scene he’s in, and Jackson hasn’t been this good since Pulp Fiction.  He’s a goddamn revelation. There’s a scene between Jackson and Dern that may be the best that Tarantino’s ever written.  The only thing to compare it to is the scene between Dennis Hopper and Christopher Walken in True Romance.  It drips with tension and subtext.  And the culmination?  Well I won’t ruin it for you. The Hateful Eight just proves what I’ve said for years–there needs to be an Oscar for best ensemble cast. 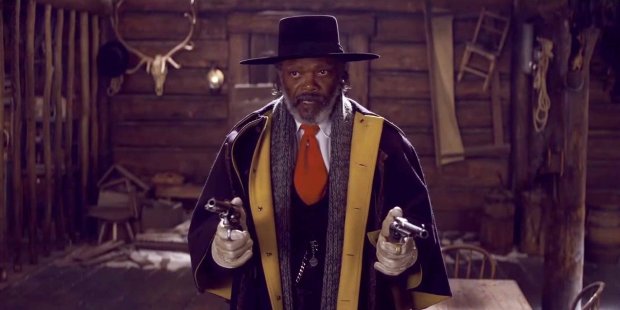 Tarantino’s never been the subtlest director in Hollywood, however I’m not someone who thinks that he tries to overtly drop a message into his movies. Rather, I’ve always felt that messages need to flow organically from the film and his do. Overt messages appear obvious and pretentious, something that belongs at a political rally rather than in a film.  Having said all that, the issue of racism was prevalent in Django Unchained and it rears its ugly head again here but in an organic way.  The racial overtones of The Hateful Eight are in your face with the frequent use of the n-word and many racially charged scenes, but at the end of the day this film is still a Western not a full blown moral indictment of America.  That Tarantino paradoxically accomplishes these things at the same time boggles the mind.

Despite its ugliness, I think the racial factor comes from a good place.  It’s meant to point out how it’s still a real thing and needs to be confronted and dealt with rather than pretending it doesn’t exist.  But I think there is a message of hope in that despite the animosity, there’s a chance to rise above it.  I say this because of the people who actually survive by the end of The Hateful Eight.  I won’t say who they are but there’s kind of a poetic symmetry in who remains.

While The Hateful Eight isn’t for everyone, especially moviegoers who aren’t fans of Tarantino, this in no way discounts it’s visceral and powerful nature. If you want powerhouse acting, brilliant dialogue, top-notch directing, and beautiful scenery, The Hateful Eight fits the bill.

← Tribute – Alan Rickman
10 Awesome Arcade Games That Have Been Forgotten →